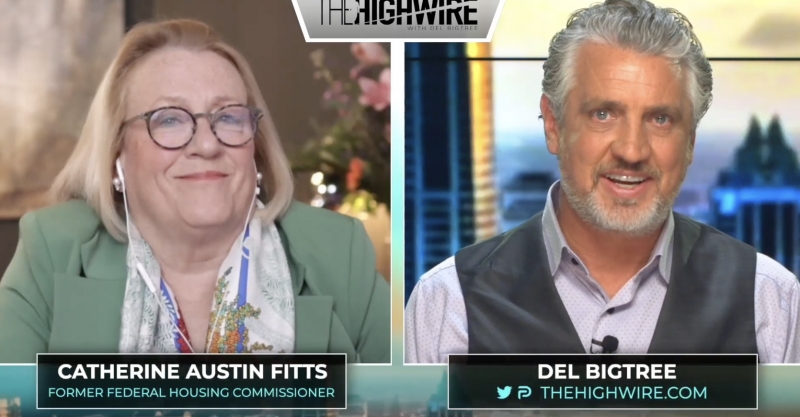 In a repeat-visit to Del Bigtree’s show THE HIGHWIRE, former US-Government official and Investment Banker, Catherine Austin Fitts, who today is President of Solari.Inc, an Investment Advisory and Freedom Champion, gave a stunning and illustrative account of what she calls “an insider vs. outsider” game. Fitts was referring to the ongoing takeover of the world by U.S. and Global Elites who had been, according to Fitts, making “a command decision to use advanced technology developed over the last 50 years to dramatically consolidate control” because they had “given up” on the general population.

Catherine Austin Fitts, who recently was elected Member of the Board of Children’s Health Defense Europe, spoke at length about how government regulation was instrumentalised in favor of the “Insiders” to instigate “a coup d’ Etat” by criminal financial means:

However, as Fitts explained, the takeover is not just designed to empoverish the population:

»Because this centralized thing, which depends on complete control… I mean, we’re talking about returning to slavery. And if you think it’s a problem they’re going to take your house, wait ’til they come in and take your kids!«

Modern Technology makes it possible to return to a system of slavery, the “most profitable investment in history”, so Fitts, which had only been abandoned because it had become impossible to perfect collateral in the ancient slave trade economy. “Now, with digital technology, you can perfect collateral. And with modern media and telecommunications, you can use perfected collateral in ways that allow you to dramatically influence what they think, and their behavior. (…) They’ve gotten the bit in their teeth of what they can achieve globally, and they have no more tolerance to deal with the general population.”

But Catherine Austin Fitts was far from being depressed by this. It was, she said, however essential to “stop this conspiracy thing”. By this she referred to a misconception in the population about conspiracies:

»What I discovered was that someone had persuaded the general population to denigrate conspiracies because that would make them powerless, and then they wouldn’t compete to buy and control the land, or compete to buy and control the state legislators. In other words, you know, this whole thing about conspiracies is getting us to resign for the game. So if you don’t like Klaus Schwab’s conspiracy, let’s start a conspiracy!«

In order to get in the game and start a conspiracy, Catherine Austin Fitts explained, it was essential to “come clean“, get off Television (loosen Techonolgy’s grip), and use the time to “gang-up” with neighbors to plan how to create a local Foodclub, for example, or how to “get a decent Sheriff elected who will be honest (…) There are a thousand ways to do it”, says Fitts.

The most important thing however was taking care of health. Fitts: “So first, you’ve got to get really savvy about managing your family’s health and how you invest your money to stay healthy.“

Both Catherine Austin Fitts and Del Bigtree closed on highlighting the importance of Robert F. Kennedy jr.’s book The Real Anthony Fauci for understanding the deceptive behaviour of Governmental agencies that long have become complicit in acting as a promoter for private interests invested in both Pharma and Big Tech, instead of acting in the best interest of the general population, as was their raison d’etre.

As for the task to becoming savvy about health: Children’s Health Defense and CHD Europe’s websites are good places to start, don’t you agree?