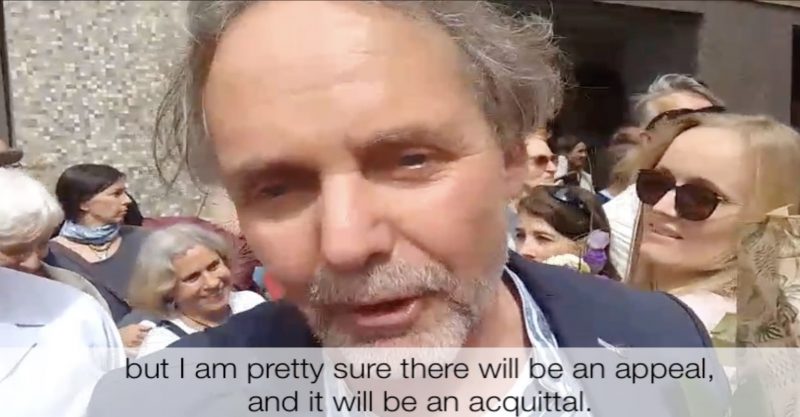 Germany saw two significant judical events today, one in Passau (Bavaria), another in Leipzig. The county court in Passau (Amtsgericht) had a sentence passed onto Dr. Ronny Weikl, who was accused of issuing false health certificates when he in fact expressed his medical opinion, based on scientific evidence, that wearing a mask can be dangerous to people’s health. In Leipzig at the Federal Administrative Court (Bundesverwaltungsgericht), two members of the German Air Force (Luftwaffe) were challenging the vaccine mandate for all German soldiers. While in Passau, a small town on the river Danube in South-East Germany, the Law provided a disappointing sentence for Dr. Weikl when the Court sentenced him to one and a half years imprisonment on probation as well as a ban to work as a medical doctor for three years, Leipzig was much more friendly to all Friends of Health Freedom: Against all expectations, the Federal Court did not decide after a very long day of hearing evidence. Instead – and this is almost sensational for Germany, which until know has seen very few signs of independent Justice – the Federal Court called for more evidence to be heard. What this means is almost certain: The call for more evidence is a straw to which the Federal Judges clung in a very likely desperate effort to avoid a potentially disastrous win for the two Air Force members, who had called a number of prominent and distinguished scientist to testify on a total lack of evidence for efficacy on Covid-Vaccines.

Among those who testified to the Court in Leipzig were Professor Sucharit Bhakdi and Professor Arne Burkhard along with Data Anlyst Tom Lausen. All witnesses presented evidence that dramatically questioned vaccine efficacy, whilst the representatives for the German Department of Defense, according to oberservers, seemed ill-prepared and provided virtually no data to show that the vaccine mandate was warranted for the military.

Under this circumstances, the court’s decision to hear more evidence is equivalent of a desperate attempt to avoid an outright decision in favor of plaintiffs, which in itself would have amounted to a sensation. Had the highest judicial court in Germany granted exemptions from vaccine mandates to the plaintiffs, the whole narrative of “safe and effective” vaccines would have collapsed. In this way, the court seems to have resorted to calling for more evidence being presented. Given the fact that most of the evidence heard on the first day of session was from the plaintiffs, it becomes apparent how weak and fragile the official government narrative on vaccine mandates seems to be.

Dr. Ronny Weikl after leaving the Courthouse in Passau

In the case of Dr. Ronny Weikl, signs had already been pointing towards not a judical, but a “politically correct sentence” against Dr. Weikl. In a comment right after leaving the courthouse in Passau, Dr. Weikl, who was sourrounded by hundreds of supporters who on entering the court house chanted “Aqcuit Dr. Weikl”, was quite upbeat: “I feel sorry for the Judge and the two lay people on the Jury”, Weikl said. “They lacked the courage to come to a just conclusion on the case. Instead they went for the easy exit, which was to heed the call from the government. We will challenge this sentence, no question.”