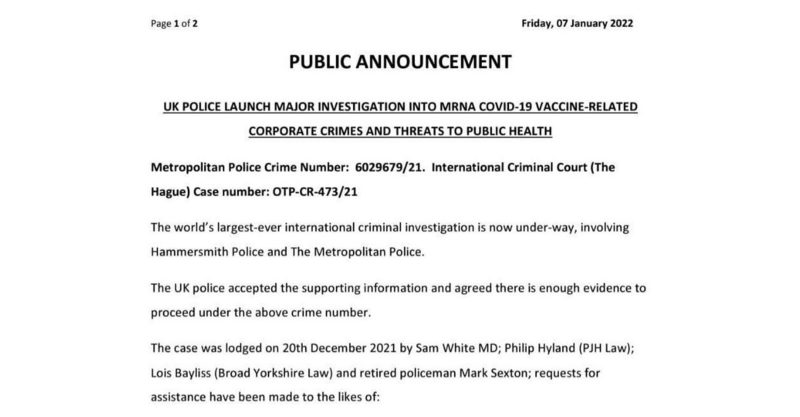 According to reports, Dr Sam White and his legal team are investigating the UK government for ignoring known safety risks associated with the Covid-19 vaccine.

White and his team visited the Charing Cross and Hammersmith police stations based in London to try and file a criminal complaint alleging that the British government and authorities are knowingly withholding information from the public about the health risks associated with receiving the Covid-19 vaccine.

PJH Law said that it has “significant and irrefutable evidence” of wrongdoing, and the Metropolitan Police reportedly accepted this evidence as part of the filed complaint. A crime reference number was then issued for “Misconduct in Public Office” and a designated officer from the department has been assigned to handle it.

Lawyers acting on behalf of White stated: “Of paramount importance and as a matter of public safety, we as a collective have demanded the vaccine rollout is stopped immediately and we suggested an address to the nation is made by the Metropolitan Police to advise accordingly.

“A number of government departments and in particular individuals in public office and government have been named as offenders and we have supporting evidence.”

According to reports, the police interview that led to this lasted six hours ad was recorded. It is not being released to the public, however, because it is now classed as a live investigation.

One of the issues White’s team stressed to police is that doctors, nurses and other health care professionals across the UK are being “blackmailed to take the vaccine or lose their jobs.”

The deadline the UK government has set for healthcare workers to be fully vaccinated is April 1, 2022.