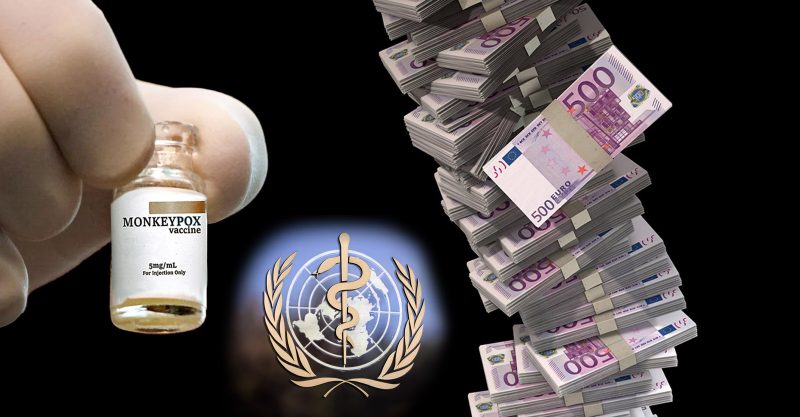 On May 19, 2022, the first suspected case of monkeypox was reported in the region of Paris, France. In an alert distributed to all health professionals, the Directorate-General of the French Ministry of Health (DGS) mentioned an unusual phenomenon.

At the end of May, the EU was already in talks with Danish firm Bavarian Nordic and US company SIGA Technologies for joint purchases of monkeypox vaccines and antiviral drugs, according to a report in Swedish daily Dagens Nyheter Friday. “It will go quickly. We should have a contract ready in a week or so and maybe some limited deliveries in June,” Sweden’s vaccine coordinator Richard Bergstrom said. The virus normally causes fever and skin lesions.

Monkeypox or Moneypox?
Monkeypox usually has a low fatality rate in humans, from 2 to 3%, and has little to do with that of human smallpox, which exceeds 30%, unless genes for gain of function have been introduced. Note that 3% is still 100 times higher than the lethality of Covid.

Professor Christian Perronne, infectiologist, former vice-president at the World Health Organization of the European Expert Group on Immunization (ETAGE) has responded with the following: “In the DGS press release, it is said that monkeypox affects preferentially male homosexuals and that transmission is mainly by respiratory route. There is something that escapes me here, it seems contradictory”.
He continues: “It seems impossible that there is a spontaneous emergence, in a few days of isolated cases in Canada, in the USA and in several European countries. Especially since the patients had not traveled beforehand.”

“There is little chance for a rapid and epidemic spread because symptomatic people are covered with large blisters, including on the face, and can therefore be spotted from a distance, he continues. These patients have fever and great fatigue. They are in no condition to be running around in transport or attending work. It is therefore easy to isolate them. Monkeypox is not very transmissible from human to human. It requires close and prolonged contact.

It is important to mention that Bill Gates announced that there would be an epidemic of a virus derived from smallpox and invested in a smallpox vaccine in 2019 and, as if by chance, we end up with smallpox cases in Europe, Canada and the USA in 2022. What a coincidence!”

Recall that on December 6, 2021, the Committee for Medicinal Products of the European Medicines Agency (EMA) published its summary opinion in support of the approval of SIGA’s application for Marketing Authorization for tecovirimat (TPOXX®) for use in the treatment of human smallpox, monkeypox, bovine smallpox, and complications of smallpox vaccination with vaccinia.
The Institut Pasteur in Bangui and the University of Oxford will begin human use of tecovirimat in a compassionate-use efficacy study to treat monkeypox patients with treatment failure in M’baiki.

In the Central African Republic, where localized epidemics of monkeypox are recurrent in certain regions of the country, the case fatality rate has varied from 1 to 10%. Its clinical expression is known to be similar to smallpox, but usually much less severe. No potential curative treatment has been adequately studied. There is currently no specific treatment recommended for monkeypox.
SIGA Technologies is collaborating with Oxford University in the United Kingdom to provide TPOXX® (tecovirimat) as part of an expanded access protocol to treat people with monkeypox in the Central African Republic. As mentioned above, prophetically, SIGA had already announced the EMA opinion on its new drug on November 16, 2021.

Professor Christian Perronne, with Taylor Hudak from The Last American Vagabond to discuss the the hidden reality of public health organizations and the highly suspicious simultaneous outbreaks of Monkeypox that are allegedly taking place in over a dozen countries in a very short period of time. It seems that most of these organizations, with the ostensible objective of keeping the people safe, are in many obvious cases taking action that directly undermines that task, if not completely contradicting it.