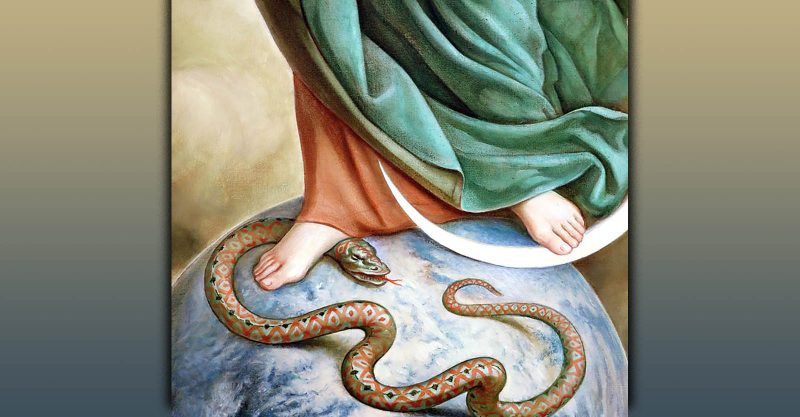 In many European countries, 15 August is a holiday dedicated to the celebration of the Madonna. She embodies the power and radiance of the mother, the woman who gives and protects life.  Look at the image of the Virgin Mary crushing the head of a snake coiled around the earth. She represents the feminine power manifested, the power of life that triumphs over evil, that force deep within each woman and also each man to overcome hardships.

Now is the time to invoke this power because our children are in mortal danger. As a parent, it is your duty to oppose our children being subjected to scientific experimentation under the pretext of protecting a few people at the end of their life journey. Allowing this goes against nature itself and the meaning of life.

Right now the future of your family and the whole of humanity is at risk. So this letter aims to gather information and actions that will help protecting our children.

Now the governments of the world that are in thrall to the finance and technology cartel want to inject them with products that have caused so much damage in a few months that they should be banned outright.  The long-term consequences of Covid ‘vaccines’ are unknown, but we already have ample evidence of the destructive action they can have on human tissues, particularly the heart, brain and reproductive organs. And while extreme caution is always required before allowing any substance to be administered to pregnant women, the health authorities have been pushing them to be vaccinated.

To those women who are carrying life inside them today… please don’t give in to the pressures of white coats or your entourage! Haven’t you noticed how your sensitivity and intuition are increased tenfold? Your body knows exactly what is needed, trust it.

Let us not underestimate the sacred power that works through us when we are moved by love and faith.  It is infinitely superior to all the tinkering of the so-called artificial intelligence that is supposed to augment a man or ‘human’ who is only weak when he loses his spirituality.

A loving mother is driven by the vital principle. She knows when her child is hungry, when he is in danger and she understands what he says, even when he is speechless or on the other side of the earth. From voodoo magic, to vampire rituals, to the Nazis’ desire to create a ‘superman’ or the transhumanists’ desire to create an ‘augmented man’, all these manipulations to acquire special powers are nothing but sad admissions of the inability of those ignorant people to connect with their inner selves and accept their humanity. It is time to liberate ourselves from all these sick impulses.

Did you know that Naples was the first city that liberated itself from the Fascists and Nazis, without waiting for the arrival of the Allies? This episode took place in September 1943 and is known as the ‘Four Days of Naples’.  The situation of the inhabitants was tragic, most of the men of the city had gone to the front and the population had been suffering from famine for several weeks. On the orders of a certain Colonel Scholl, the Nazis had requisitioned young people between 20 and 30 years of age and threatened to shoot any recalcitrant. But this was without counting on the invisible force of ‘the little people’ and especially of their mammas.  Yes, you read that right, it was not only the students, peasants and craftsmen who came together, but also all the women of the city, who stood together against the fascists to protect their sons.

This is my prayer to the mothers. Come out of your homes to restore order to this chaos and drive out the sick spirits. Women, heaven is with you!