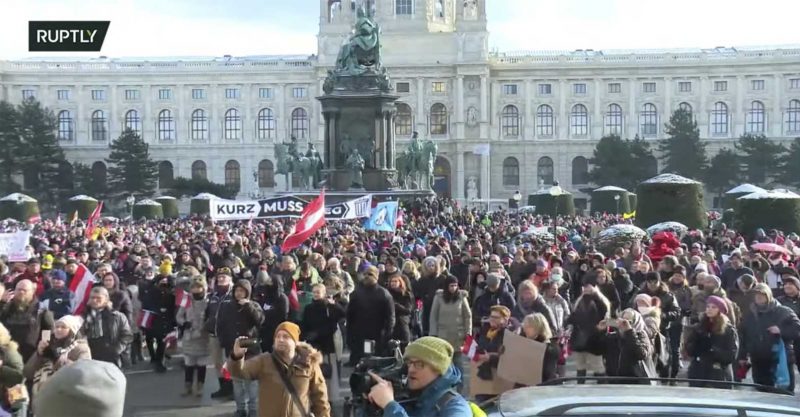 Citizens all over Europe are exasperated with the increase of restrictions and the destruction of society imposed by their governments with shameless fearporn. Most countries are now playing ‘the english variant’ tune to take it to the level of fascism passing legislation to make emergency legislation and measures  the new way to rule over their population.  The United Kingdom is leading the way with very strict lockdown measures, mass testing and vaccination. Fines for not wearing a mask, breaking ‘bubbles’ or lockdown rules easily go up to several thousand euros and even months of prison time.

Almost everywhere in Europe police forces are sent to demonstrate brutality and intimidate the population.

In Belgium a family with 2 teenagers who had a couple of mates overnight was sent 14 police officers for control.  The intervention had a bad ending. The parents were beaten up with nose fracture, loss of consciousness and multiple bruises while the kids were threatened at gunpoint. Sadly those kind of incidents are now frequently reported all over the continent and this time it seems to have no limits. 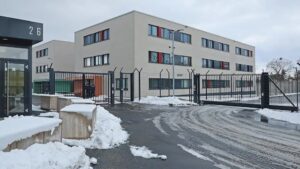 In Germany after months of peaceful protests all over the country, Merkel’s government still managed to pass a corona bill which reminded many to the pre-war legislation that brought Hitler to power. The state of Saxony has decided to repurpose refugee camps for Covid ‘dissidents’ while according to RT news a first isolation camp also built in Dresden.   This pandemic ‘hotel’ is meant to jail violators for a punitive stay rather than to prevent contagion of high risk cases. Looking at it, the message is clear. It’s a chilling picture that is only missing the ‘Arbeit Macht Frei’ sign to match nazi icons.

Over the last days, physicians who prescribed medical exemptions to wear masks were subjected to house searches by police forces who seized all their material, including telephones, computers and all their patient records. Dr. Rolf Kron famous for his critical positions on vaccines was suspended and saw his bank accounts closed.

Throughout Europe, experts work hard to figure out how they can increase restrictions and penalties but in many countries those  already reach a full extent. If  masks are mandatory almost everywhere all the time for everyone, if most shops and businesses have been closed for most part of the year, as well as schools and when everybody is already working home and the bubble is limited to one or two persons… what else can be done?

Now for many, it’s time to end this catastrophe. With the new year starting people are not ready to go endure another ‘2020’.  This week-end freedom fighters were demonstrating in Europe’s major capitals while bars, restaurants and services and independent business were also reopening.

France has extended its ’emergency law’ until the end of June and plans to renew it until the end of December.  The government is struggling hard to impose vaccination when polls reveal that 60% won’t take it and keeps hesitating between mandates and recommendations. A new bill called ‘law on the global security’ is on the table to increase police power, build isolation camps, increase data collection and censor media reporting on police violence. Massive protests took place soon after the bill was proposed at the end of December and even included mainstream media.  On Sunday more than 15 000 were in Paris and smaller number in other cities to fight this new attack on civil rights.

Banned by the government, the rally in Vienna was a big success 30 000 peacefully protested against the draconian coronameasures in front of the parliament.

Protests were also going on in Denmark this Saturday where the government is to take a new vote this week on the ‘pandemic law’.  The law was rejected in November after the 9 days of a now famous  ‘Kling Klong’ siege where groups of activists take turns 24/7 to bang pots and pans and make sure they are heard in parliament. Freedom demonstrations have also been going around the country for months under the leadership of Mads Palsvig, a former investment banker with a charismatic personality who started a political party called JFK21 with the intention to fight corruption and place human rights at the centre. The party also strongly advocates medical freedom requesting that the coronameasures be ended.

In Italy up to 30,000 restaurants and businesses have opened up without permission from the government. The  Io Apro (‘I open’)  participants said they were entering resistance and would remain open. Police were controlling the streets trying to stop customers going to bars and restaurants but were not enough to stop the crowd to go  back enjoying a good meal.  Dozens of establishments and their customers were fined but most said they would still keep their businesses open.

Poland also decided a big reopening with the support of a group of highlanders  invoking veto power to stop a government acting against the good of the people. Inhabitants of the Tatra mountains a region that lives from tourism and wintersports already took the liberty to restart most activities. They support neighbouring region’s and invited the whole country to end coronavirus measures and get back to normal.

The situation in the Netherlands is rather confusing. After a year of  open country and ‘light measures’ policy, the government recently decided to impose the first real lockdown on the population. A rally against these new restrictions planned on Sunday was cancelled by officials but over 7000 people still gathered in Amsterdam in front of the Van Gogh museum on Sunday. The government took a revenge deploying massive contingent and troops to send the protesters home, using watertanks, gas bombs and charging with horses.

Meanwhile the government has suddenly resigned over a child subsidy fraud committed by tax officials that had been in the news for a while. This moves comes 2 months before an election planned in March and also affect leaders of the opposition. The Netherlands is the home of several international institutions such as the European Medicines Agency that was relocated there after Brexit and the International Criminal Court of Human Rights in the Hague.

Many governments in Europe seem to be in a very fragile position at the moment and the Union is facing an unprecedented economic and political crisis threatening its future.

Europe is in balance between democracy and fascism. The coming weeks will tell where we are heading.