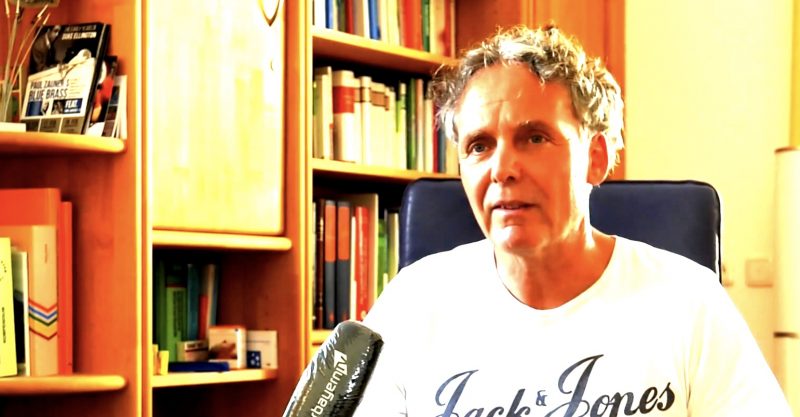 On Monday, 02.05.2022, the County Court of Passau will pass a verdict against the “mask doctor” (so BR 24) Dr. Ronald Weikl (his friends call him “Ronny”) for mass issuance of blank certificates for exemption from the mask requirement. Whether it was a matter of issuing false health certificates, which is punishable under §278 of the German Criminal Code (StGB), as alleged by the prosecution, or only of medical certificates, for which §278 (StGB) does not apply at all, as the defense argues, was not discussed intensively at all and actually remained open until the end.

In particular, the exact wording of the law at the time of the ” deed ” is important. Until the new version of the law amending the Infection Protection Act of November 22, 2021 (BGBl I p. 4906), physicians and other licensed medical personnel were only liable to prosecution under § 278 STGB a.F. (old version) if they

“…issue an incorrect certificate about the state of health of a person to be presented to an authority or insurance company against their better knowledge“[1].

In the media reports it was not disclosed (vulgo: suppressed) how many of the ‘incriminated’ medical certificates had been issued by Dr. Weikl before this change in the law. This was presumably done on purpose! Because otherwise the MSM, first and foremost the local press (PNP), which is quite “hectoring” and portrays Dr. Weikl pejoratively (disparagingly), would have had to write that all medical certificates had been issued long before the initiation of the criminal proceedings, long before the search warrant and long before the search and seizure actions on 16.12.2020, i.e. long before the change in the law. But then the principle of legality in criminal law applies, i.e. the guiding principle written into the Bavarian Criminal Code since 1813 by Anselm von Feuerbach “nullum crimen, nulla poena sine lege“, then only § 278 StGB a.F. applies. Von Feuerbach achieved pioneering fame of European rank because of his ideas on the legal system. If he knew what Bavarian prosecutors and police officers make of it just under 210 years later, he would be ashamed to death.

The elements of crime

From the very beginning, there was a lack of proper subsumption of the objective and subjective elements of the crime in the criminal complaint and in the legal action.
The medical certificates could not actually be incorrect. Whether they were or not was not subject to examination by the police or the public prosecutor’s office; this is a matter for medical expertise and the professional code of conduct for physicians. As long as the physician exercises his profession according to his conscience, the imperatives of medical ethics and humanity, orients his medical actions to the well-being of the patient and observes the standard of medical knowledge, he is free from directives, especially those from non-physicians.[2]

Even at the beginning of the C crisis, the World Health Organization (WHO), the Robert Koch Institute (RKI) and large parts of medical science were aware that the undifferentiated mandatory use of masks is in no way evidence-based, that masks do not guarantee comprehensive protection for others and oneself and, above all, that they can be extremely harmful to the health of the wearer.

This could have been inferred from the occupational health and safety guidelines that applied before the C amendments of the German Federal Ministry of Labor and Social Affairs (BMAS) of April 16, 2020; these only allowed each adult working person a maximum wearing time of 75 minutes, obliged them to take a break from wearing the device and warned against private use.
Reference could also have been made to the mask manufacturers themselves who, at least until 17.05.2021, printed the statement on their masks: “Not against particles of radioactive substances, viruses and enzymes”.

Especially children are affected, who complain of considerable side effects after daily inhalation of larger amounts of their own exhaled carbon dioxide. In the meantime, School psychologists in Lower Bavaria diagnose them with “overwhelming suffering” (PNP v. 31.01.2022), the case numbers for autism, mental disorders, psychoses and suicide in childhood are virtually exploding (most recent examples: USA: + 30%; Zurich/Switzerland: +50%, England: +75%;) and alarming appeals had to be sent from pediatrics for children and adolescents to those politically responsible.
For a better legal determination, one could even take a quick look at the leading German meta-study (65 scientific papers, including two other meta-analyses and 14 reviews), which proves the massive harm caused by masks and questions their usefulness.[3].[3]

Yet in April 2022, the public prosecutor is still persistently talking about incorrect certificates and endangering others, even in his closing argument. How stubborn do you have to be not to want to recognize the fatal reality of life? How great must be the political pressure to which the public prosecutor’s office is subject? Or how great is the political desire to please in order to follow the politically powerful, possibly in the personal pursuit of higher office? One must puzzle over the motives. But why does nobody prosecute the others, who have ordered this crime against scientific knowledge and who have possibly even enriched themselves thoroughly in the various mask deals?

For use with a government agency or insurance company

The assertion that this was certified by Dr. Weikl “against his better knowledge” was refuted in the main proceedings. No one from the police or the public prosecutor’s office can deny Dr. Weikl’s integrity as a human being and doctor and disqualify his medical certification as incorrect. His patients complained of impaired breathing, drop in oxygen saturation, hypercapnia, increase in heart and respiratory rate, headaches, fatigue, dampness under the mask, rise in temperature, lack of concentration, fatigue, confusion, skin reactions, and many other things – and he issued the medical certificate accordingly, which was supposed to medically exempt the patient from wearing the mask. What is criminal about this?

What is extremely striking is the disproportionality which pervades this entire procedure. It already started with the whistleblower, a school bus driver, who did not like the growing number of masked students and, being a petty citizen to the liking of the intelligence community, informed the school, which then informed the education authority, which then informed all schools, in order to record all such students. This is how the first 40 or so reports came about. The elaborate search and seizure operations a few days before Christmas 2020 in the doctor’s practice and private rooms with several dozen officers from law enforcement and the public prosecutor’s office was also disproportionate, probably intended to criminalize and intimidate (model: Gangland raid, or as one practice employee called it in her testimony: “traumatizing raid squad“).

The disproportionality was also evident in the police’s investigative methods, some of which were legally questionable (there were allegedly police visits to patients in which those were presented with the ‘prospect’ of criminal proceedings, in order to then more or less discreetly hint that the public prosecutor’s office could discontinue proceedings against them if they testified in line with the complaint; these accusations were not investigated, by the way). Finally, one must also criticize the disproportionate conduct of the proceedings by the public prosecutor’s office and also the court (number of days in session, unusual intensity of patient/witness questioning, advance announcement by the public prosecutor that he was in any case determined to “drive the proceedings if needed all the way to the Bavarian Supreme State Court“).

The stubborn insistence of the public prosecutor on the accusation, which should not have led to an indictment due to the lack of a criminal act, and his insistence on the claim (contrary to the facts) which has long since been disproven by medical science, that the people exempted from the mask by Dr. Weikl had endangered other people, ended after eight sessions in an abstrusively high request for punishment by the public prosecutor: two years six months imprisonment without probation – plus three years professional ban!

This was the icing on the cake of the series of disproportionalities that permeate this case. Such a sentence is on or even above the level of the conviction of the supporters of the Islamic Jihad Union (IJU) by the Higher Judicial Court of Frankfurt, the verdict against an ex-DFB referee in a well-known betting scandal or the verdict against a civil servant for bribery who, in his capacity as head of department of a state office, suppressed information about criminal activities in return for receiving 143,000 euros. These are all significant cases of organized or serious crime – but certainly not comparable with the case of the “Mask Doctor“.

In particular, the demand to impose a suspension immediately upon conviction shows the zealous, even fanatical, missionary zeal of the public prosecutor: This would hit the impassioned physician particularly hard, whose guiding principles as a human being and as a physician have always been his conscience and the precepts of medical ethics and humanity, it would even destroy his existence. Is this the objective? Is an example to be made here? Is it the operational aim to muzzle a board member of the extremely active association “Physicians and Scientists for Health, Freedom and Democracy (MWGFD)“? Is the intention to damage or even destroy the Corona Exit Plan presented by this association? Is Dr. Weikl to be punished because of his “insubordinate behavior” against the state authority, because of his speeches at demonstrations against mask coercion and other disproportionate Corona measures?

It is only to be hoped that the judge will see through the lack of evidence and the disproportionate nature of the judicial measures undertaken during the hearing of evidence in the main trial and will now come to a courageous acquittal, so that the rule of law is not damaged even more.

Uwe G. Kranz, is a former National Expert at EUROPOL and former President of the Criminal Police Office (LKA) in the State of Thuringia (Germany).