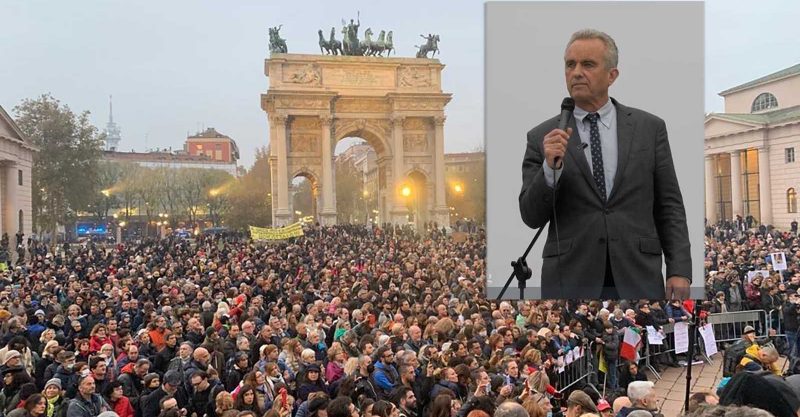 Watch the demonstration (Kennedy starts at 26:17)

Transcript of Robert F. Kennedy, Jr.’s Speech at the Rally

«  No government, in the history of mankind, has ever relinquished power voluntarily.

The power they have taken away from us, over the past 20 months, they will never give back.

They have taken away our property rights in the United States. They closed a million businesses for a year with no just compensation and no due process.

They have taken away our right to be free of warrantless searches and seizures, and surveillance by the government.

Among the most important of those rights, after the right to free expression, which is gone,  is the right to be able to participate in rule making.

So when the government wants to pass a law, he has to explain, he has to publish the law, the proposed law. He has to explain the scientific basis for that law. He has to do a benefit/risk analysis of that law and explain it to the public. And then we have comments, that the whole public can participate. And then we have a hearing, where people who oppose the law, like myself, can bring in their own scientists and experts, and scientific studies, and it’s all transparent. All of those safeguards have been obliterated. Today, the law is what one man says it is. The top doctor in America. Anthony Fauci.

In one month, in March 2020, Tony Fauci told the world that masks don’t work. It was scientifically worthless. Two months later, he ordered all Americans to put on a mask. He didn’t give us any scientific studies that made him changed his mind. He simply told us  : “That’s the  new law, do what you’re told.”

All of these rights that the founders of our country died for, sacriffying their property or their livelihoods, to give us the Bill of Rights, and all of those rights, in 20 months, have been obliterated, taken from the American people and not just Americans. This is a global Coup d’Etat against liberal democracy across the planet.

All of these rights that were taken away from us, the government said it was temporary, it will be only two weeks, it would be over. In truth, you can all see what is happening. They are taking those rights and they will never give them back unless we make them.

The Green Pass is not a public health measure. It is a tool for totalitarian control, of your transportation, your bank account, your movements, every aspect of your life.

And this is not a new idea. This is the same idea that they used in Germany in 1937, they issued a pass for people they wanted to control.

And when the South Africa apartheid government wanted to control the black population of South Africa, what was the most important thing they did? They issued a green pass.

I want you to ask, all the people, journalists and press, who are here today  : if the Green pass is about public health, why is it being issued not by the Health Ministry?

It is being issued by the Financial Ministry. Do they think we’re stupid?

This is a way to control your money. Once you have that green pass, and they have the digital currency, if somebody tells you do not leave Milan, and you go on a trip to Bologna, your money won’t work in Bologna. If the government tells you don’t buy pizza, they can make it so your green pass won’t buy pizza at the pizza store. They can control every aspect of your life.

Pfizer is the only company that has an approved vaccine in the United States.

And Pfizer was supposed to have a three-year study, but they cut it down to six months. And then they gave vaccinations to all the controls.

Because they learned that the antibodies disappear in 6 months and the vaccine no longer provides protection. So they had to end it in 6 months. They could not do what they  planned, three years.

They took all their records for that 6 months and they gave them to the FDA.

The most important table is the table that tells you the all-cause mortality. How many people died in the vaccine group? How many died in the placebo group during that 6-month period? That table is called “S4”. You can all look it up.

Here’s what the numbers say.

There were 22,000 people in the vaccine group. Over a 6 months, one died from COVID.

In the placebo group, the control group, there were 22,000 people, two died from COVID in 6 months.

That allowed Pfizer to tell the American public that the vaccine is 100% effective, because 2 is 100% of one.

Most Americans and most Italians, when they hear that the vaccine is 100% effective, what they think is that if I take the vaccine, I have a 100% chance of not dying from COVID.

That is not what that means.What it means is they have to give 22,000 vaccines to protect one person from dying from COVID.

What that means is that they better make sure that the vaccine itself does not kill one person even, because if it kills one person, then, it cancels out the entire benefits.

Here is the important thing.

That means that if you take the vaccine, you are 48% more likely to die over the next 6 months than if you don’t.

These are Pfizer’s numbers, not mine.

Here’s how the people died.

In the control group, 1 person died of a heart attack over the 6 months.

In the vaccine group, 5 people died of a heart attack over the 6 months.

That means, if you get the vaccine, you have a 500% risk of fatal heart attack within 6 months.

It also means that for every one person who is saved from dying from COVID, the vaccine is killing 4 people from heart attack.

Public health is supposed to save lives.

And the only reason people don’t understand what I just said, and that people still support the vaccine, is one reason: the manipulation of fear.

It’s simple mathematics. Anyone can look it up. If you look it up, you will be more scared of that vaccine than you are of Covid.

The government and the pharmaceutical companies have a method for turning off people’s brains, so that they can no longer do simple math.

And that device is fear. Fear stops us for exercising critical thinking. It allows us to believe that if we just do what we’re told, that is the only way to save our lives. It’s called the Stockholm Syndrome. And the captors, they locked down a whole country for a year, and people become grateful to their captors. And think that the only way we can live here alive is if we have absolute obedience.

I’m gonna make another point. How many people here have heard of Event 201?

If you haven’t heard of it, you should go look at it out on YouTube.

Our hosts, the people who came to that [event], were the big social media companies, the media companies, and Johnson and Johnson, the biggest vaccine company. And it’s hosted by three people. One is Bill Gates. Two is George Gao, who is the head of the Chinese CDC, and three is Avril Haines, the deputy director of the CIA.

And Avril Haines is today, the top number one spy in the United States. She is the head of Joe Biden’s national security agency. So she went from Event 201 to becoming the top spy in our country.

The CIA is a public health agency. It came as a surprise to me. Because the CIA does not do Public Health. The CIA does Coups d’Etat.

Between 1947 and the year 2000, the CIA was engaged in 73 coups d’etat, most of them against democracies. One third of the countries in the world.

If you look at Event 201, there was no discussion of public health.

Nobody was talking about how do we get vitamin D to all the people. How do we get people to lose weight? How do we make sure they eat good food? How do we find repurpose medicines to treat people? How do we quarantine the sick? How do we preserve constitutional rights? Not a word was said about public health.

Instead, what they were talking about is how do we use the pandemic as a pretext to clamb down to totalitarian control and to deconstruct democracy.

They spent one quarter of the day, talking about how to make sure nobody is allowed to spread the rumour, that the coronavirus pandemic is laboratory generated. This is October 2019.

And they talk about how to lock down the population, how to force them to take experimental vaccines, how to make sure that black people don’t start resisting, because in our country, blacks are very suspicious of the medical establishment and they were deeply concerned about our resistance.

When I researched my book, what I learned was that Event 201 was not a one time occurence. We found 20 separate pandemic simulations beginning in 2000.

They involved hundreds of thousands of people. They were conducted secretly. They used   frontline workers, and they were training police, and hospital systems and utilities, in Europe, Italy, Germany, Canada and Australia, all at the same time, to do a respond to a pandemic. But this was not a public health response. It was a response to use the pandemic for something else.

So they practice and again and again, how to use a pandemic as a pretext for imposing totalitarian controls and for obliterating liberal democracy across the planet.

And 67% of the people, will be hypnotized by fear into obeying a position of authority, a figure of authority.

And our job is to get out of here today and to reach out to our brothers and sisters, the people who are still hypnotized, and tell them that we will fight for their freedom, until they are able to fight for themselves.

We need to reach out when we leave here today, to all our brothers and sisters, the 67% who are still hypnotized, and we have to tell them, that you need to love your freedom more than your scare of a germ.

This year we saw the destruction of the American Constitution. That Constitution was written by a group of people, who understood that there are worse things than dying.

And they put their lives on the font line, their property, their careers, their livelihoods, to fight for freedom and to fight for those rights that we have lost in the previous 20 months.

And to reclaim our government, to reclaim our lives, to reclaim our freedom for our children, for our country and for all future generations and I can tell you that I will stand side by side with you. And if I have to die for this, I’m going to die with my boots on. “