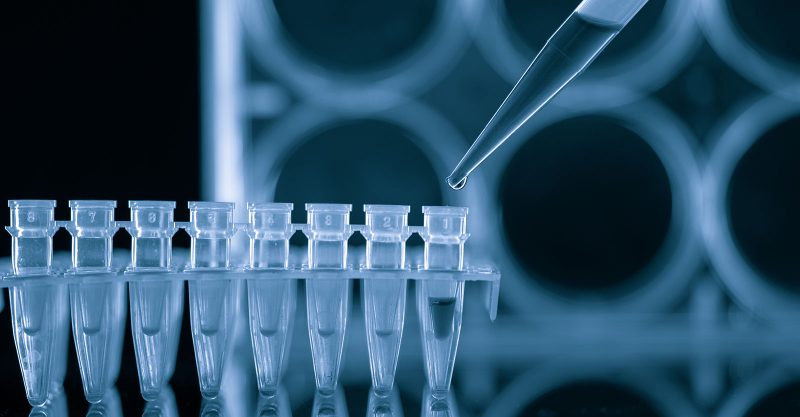 SUMMARY: If inoculation can be used as verification of the Corman-Drosten RT-PCR test for Covid-19, about 50% of the positive results reported must be considered false when a maximum of 35 cycles are applied. If only 25 cycles are applied the fraction of false positives drops to 20%.

The efficacy of the RT-PCR test used to identify infection by the SARS-CoV-2 virus and ”cases” of the Covid-19 disease is widely disputed. In these discussions it is often maintained that the test produces 97% false positives. Reference for that claim is made to a study by a Marseille-based group who communicated their results in a letter to the editor on September 28th, 2020.

The first author is R. Jaafar, so it is hereafter referred to as the Jaafar-paper. It represents an expanded data set compared to an earlier study spearheaded by B. La Scola. This publication is referred to as the La Scola-paper.

In sum, the results presented in the Jaafar-paper do not provide a stand-alone proof for the test producing 97% false positives. The present comment is an attempt to distil the essential conclusions from their data.

In the semi-public domain, it has been another matter of confusion that the abbreviation “RT-PCR” is sometimes referred to as “Reverse Transcriptase Polymerase Chain Reaction”, while in other cases one may see it explained as “Real Time PCR”.

It is both. It is Real Time RT-PCR.

The enzyme reverse transcriptase addresses single-stranded RNA fragments in the swab and converts them into double-stranded DNA in a series of steps. Thereafter, the polymerase enzyme begins to make copies of selected DNA. The selection is determined by a pair of so-called primers which are necessary for initiating the process.

The replication occurs in cycles. Each cycle begins by heating the sample in order to separate the DNA double-helix into two free DNA strands. These serve as templates for the polymerase to produce complementary strands of each out of the building blocks present in the soup. Upon cooling the strands recombine. The cycle has ended. The result is a doubling of the number of DNA molecules present prior to the cycle.

During production the DNA is tagged by a probing molecule which fluoresces only when it is incorporated into the DNA. Thus, the sample emits visible light when irradiated with a little laser. The fluorescence intensity is recorded for each cycle of the PCR as a measure of the amount of DNA being produced. That is where the real-time comes in. When a pre-determined level is reached, the multiplication process is stopped and the test termed “positive”.

The number of cycles needed to produce the critical level of fluorescence is called the cycle threshold, Ct, which is a characteristic of each sample. Obviously, if the process starts with a huge number of RNA-fragments, the threshold fluorescence intensity is reached early and the Ct is low. If the initial loading is only a few RNA molecules, or maybe even a single piece, it may take many cycles to get the critical fluorescence signal.

As will be understood from the following, this exchange may imply that person #2 had a cold last fall but no clinical symptoms today.
All samples are positive if 60 cycles are applied because “PCR makes something out of nothing”, as Kary Mullis – the Nobel Prize-winning inventor of the PCR technology – once said.

When it is only a matter of cycles before the test is positive, we must all have DNA and/or RNA fragments – foreign or domestic – in our body, which are targeted by the primers in current use. At high Ct values you end up amplifying “the background molecular noise” of benign genetic fragments.

We all have a CT all the time!

The Jaafar-paper is a contribution to the important discussion of the therapeutic utility of the PCR methodology. More specifically: “What is the tipping point for Ct below which a PCR provides a meaningful test for Covid-19 and above which it is meaningless”?

From the beginning of the Covid-19 outbreak until the research being wrapped up in said publication the Marseille institute performed 250,566 SARS-CoV-2 tests for 179,151 patients.

Out of these positive samples, 3790 were inoculated and managed for culture. The process of inoculation is more-or-less described in the La Scola-paper.2

They write, that “0.5 mL swab fluid was centrifuged and inoculated onto VERO cells (monkey kidney cell line) and observed for cytopathogenic effect” – in an undisclosed number of days.

That is, did the cells die and disintegrate? This observation must have been done under an optical microscope. If they observed cell death a liquid sample was taken from the vial and processed accordingly for observation in a scanning electron microscope.

The authors call this “Presumptive detection of virus in supernatant showing cytopathogenic effect.”

In translation, this means: “If we see the monkey cells die and disintegrate in the optical microscope we take the sample to the electron microscope and believe that whatever we see there, must be the virus.”

However, no electron microscope pictures were provided.

The presence of virus is further “confirmed” with RT-PCR on said liquid. Very importantly, the Ct values for these RT-PCRs run on the samples subjected to electron microscopy are not provided. If the DNA/RNA selected by the primers before and after inoculation targeted the same virus, the latter Ct’s should be substantially lower than the Ct’s obtained from the raw swabs.

If they were not, we really do not know why the cells died.

But let us assume for now that cell death is a criterion for a successful inoculation and that the deaths are caused by the same virus being quantified in the RT-PCR test.

Thus, Jaafar et al. report that the inoculation was successful in 1941 cases out of the 3790 PCR-positives being managed for culture.
This leads us to the immediate assessment that 49% of the positive PCR-tests may have been false in the sense, that the viral load of the patient must have been insignificant.

Whether the 51% successfully inoculated samples do represent a positive diagnosis for the disease called Covid-19 depends on whether SARS-CoV-2 really is a singular entity and whether it has been isolated and shown to be the pathogen of the disease.

In this evaluation we therefore reserve the term “positive” to a sample reaching the critical fluorescence threshold. The “positives” comprise the inoculable and the non-inoculable samples (which are false positives).

The data from the Jaafar-paper are reproduced in Figure 1. It shows the distribution between inoculable and non-inoculable samples for each group of Ct’s, ranging from 11 (Ct11) to 37 (Ct37) cycles.

True, the inoculables comprise only 3% of the Ct35-group. But since there were only 74 samples needed to be taken that far, it does not mean, that the RT-PCR test produces 97% false positives overall. The picture is more diverse.

Figure 1. From Jaafar et al. Shows inoculable samples (brown) together with non-inoculable (grey) for each Ct.

The same data are displayed in a more traditional manner in Figure 2. 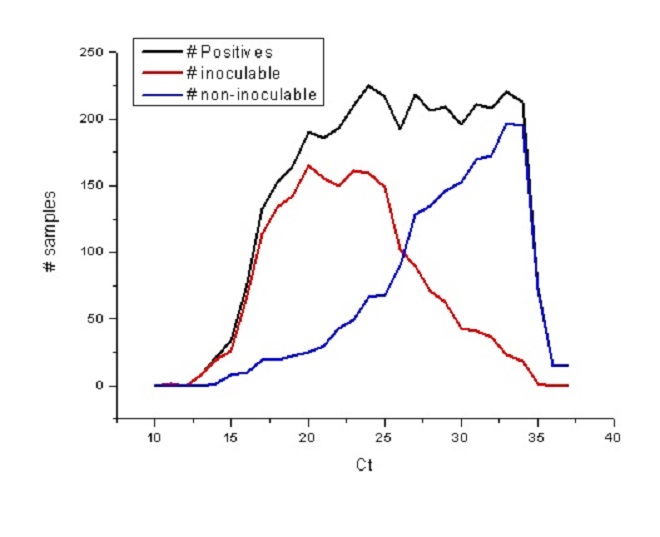 Figure 2. Same data as Figure 1, displayed traditionally. The black line represents how many samples are subjected to cell culture at each Ct-group.

We seek an answer to the question: How many cycles should be standard if we want 80% of the positives to represent an inoculable sample?

Figure 3. Left: Integration of #inculables and #non-inoculables curves in Figure 2. That is, sum of inoculable and non-inoculable, respectively, registered up until a given Ct. Right: Same, as percentage of sum of cultured samples at Ct.

In figure 3 (left), the number of inoculables and non-inoculables, respectively, are summed up to the Ct value. That is, the curves in figure 2 are integrated.

In Figure 3 (right) the same data are displayed as percentage of the total number of cultured samples up until that Ct.

It is seen that at Ct25, 80% of the samples termed “positive” by the RT-PCR test will be inoculable. However, 20% of the “positives” will be false, if inoculation is a bench-mark for efficacy of the RT-PCR. Some may find that to be a fair trade off.

So, if 1) there exists such a thing as a singular SARS-CoV-2 virus, if 2) this virus causes serious respiratory symptoms, if 3) the virus is inoculable in VERO cells, if 4) VERO cells are a valid representation of human ditto, and if 5) the Corman-Drosten test really detects SARS-CoV-2 specifically, it MAY have some benefit for a doctor in a clinical setting with a patient having serious respiratory symptoms to run an RT-PCR until Ct = 25 as a supplementary test.

It really boils down to the primers, their specificity and applicability at low concentrations. How can they target a fatal SARS-CoV-2 virus when its very existence remains to be demonstrated? Furthermore, the sequences of the various primers being used are found not only in ca. 100 bacteria but are also abundant in the human genome.

Pairing of two DNA strands – hybridization – doesn’t have to be perfect to occur. If the two strands are, say, only 80% complementary, the binding constant will be reduced. But hybridization happens nevertheless. When a vastly exaggerated concentration of primers are used in the standard Corman-Drosten test it is deliberately bound to pick up other DNA floating around, whether these have been produced by the reverse transcriptase or not.

What outcome can be expected IF the Corman-Drosten test did detect a thing called SARS-CoV-2 and was operated at maximum of 25 cycles?

Of this sub-group (3790) subjected to culture – selected among those termed positive by the RT-PCR test within 35 cycles – only 1813 would have been registered as positives had only 25 cycles been applied (Figure 4, left), corresponding to 48% of the sub-group (Figure 4, right).

Of these, 2.8% may be trustworthy (80% according to inoculation) while 0.7% may be false positives – IF inoculation is a valid means of confirmation and all other conditions are met!

To be sick is to have symptoms. If you are not sick, you are not contagious. It used to be common sense that you are healthy unless you are not.

Sense is not common anymore during the alleged Covid-19 pandemic. Now you are sick until proven healthy – and contagious by default. The vehicle for this scam is the RT-PCR test run at >35 cycles and beyond. Stop testing and survive.

Niels Harrit is Associate Professor of Chemistry (retired) at the University of Copenhagen. He was first author of the groundbreaking paper Active Thermitic Material Discovered in Dust from the 9/11 World Trade Center Catastrophe.