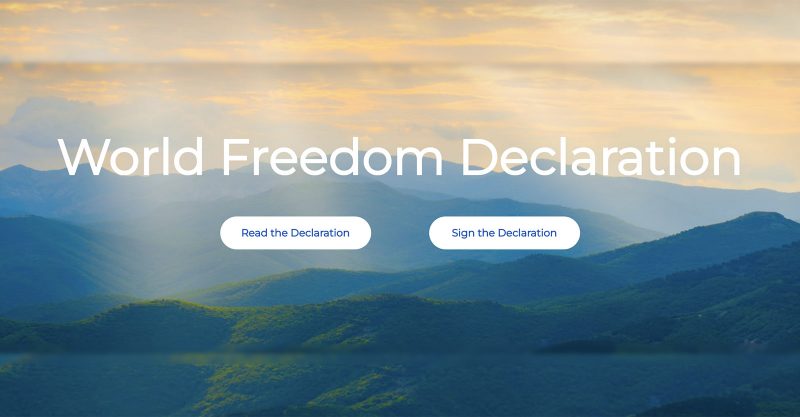 We, the undersigned, oppose the proposed amendments to the International Health Regulations (IHR), an attempt to implement the public health equivalent of a “one-world government” in violation of individual nations’ and citizens’ inalienable rights and sovereignty.

Please amplify your voice by emailing or calling your president, prime minister, members of parliament, senators, representatives, and other public servants to respectfully request that they sign the declaration and oppose the IHR amendments. You can find phone numbers and email contacts by searching on the internet.

We, the undersigned, oppose the proposed amendments to the World Health Organization’s (WHO) existing 2005 International Health Regulations (IHR) and stand in support of all people’s right to health sovereignty and self-determination.

If accepted, these legally binding amendments would come into effect for all member states except those that explicitly reject them. Under Article 59 of the IHR, de facto approval is assumed for any member states that fail to reject or take reservation to the amendments.

The existing IHR, adopted in 2005, respect the sovereignty of all member nations. The proposed amendments, however, would expand and codify the WHO’s authority to implement global health mandates in direct violation of national sovereignty and citizens’ rights.

These proposals attempt to eliminate a nation’s autonomy, during times of real, assumed or anticipated public health emergencies, affording the WHO unilateral power in assessing and determining a health emergency and empowering the WHO to dictate policy and response.

All of this comes on the heels of the COVID-19 crisis during which the WHO grossly mismanaged all facets of the global health response by encouraging economy-destroying lockdowns, suppressing early preventive treatments and recommending interventions that have proven to be neither safe nor effective.

Under the guise of health regulations, these amendments would permit the WHO to seize executive governance powers over member states, granting governing powers to unelected and unaccountable bureaucrats.

Below are just a few of the many ambiguous and concerning provisions in the amendments proposed by the US Department of Health & Human Services on January 18, 2022.

Proposed new text is displayed in bold underline, and proposed deletions to existing text are shown as strikethrough exactly as written in the proposal. All other text remains unchanged.

NEW 5: WHO shall develop early warning criteria for assessing and progressively updating the national, regional, or global risk posed by an event of unknown causes or sources…

In practice this would accord the WHO unilateral authority to enact a universal health surveillance system devoid of public scrutiny or transparency, leaving open the possibility of manufactured sources of pandemics and other emergencies.

This excision from Article 9 eliminates consultations with the member state during an “alleged” health emergency while placing the WHO in a position to dictate how a State Party must proceed within its own territorial boundaries. This constitutes a threat to national sovereignty and self-determination.

Any nation rejecting the WHO’s declaration will have only 48 hours to reconsider its position and comply, or be subjected to pressures from other nations and/or penalties such as economic sanctions. The views of the affected nation will no longer be considered.

Article 12 creates a new subclass of health emergency empowering the WHO Director-General to unilaterally trigger pandemic protocols based on mere supposition of a “potential” threat. The stipulation that a nation must agree with the Director-General’s assessment is eliminated. Distant bureaucrats would be empowered to enact health policy not only for entire nations, but by extension for individuals – irrespective of the wishes of the nation or the people.

1. The State Parties shall establish a Compliance Committee that shall be responsible for:

(a) Considering information submitted to it by WHO and States Parties relating to compliance with obligations under these Regulations;

(b) Monitoring, advising on, and/or facilitating assistance on matters relating to compliance with a view to assisting States Parties to comply with obligations under these Regulations.

One of the IHR amendments’ most insidious changes is the creation of a “Compliance Committee” that will serve as the administrative and enforcement mechanism to ensure member states comply with WHO emergency directives involving infrastructure, capital expenditures, information gathering and implementation of emergency responses.

In sum, the IHR amendments would, among other changes:

This power grab by the WHO, its donors, and stakeholders represents a direct attack on the political and economic sovereignty of all nations and their citizens.

By repeatedly promoting policies that caused catastrophic economic, social, physical, emotional and mental damage across the globe, the WHO has failed in its mission as global steward of public health and cannot be entrusted with setting policy for all citizens of the world.

Of note, the WHO enjoys immunity from every form of legal action, arrest, and searches of their papers, documents, and facilities.

The WHO should not be allocated more money, power, or authority nor should it be allowed to further control the world’s health agenda or implement biosecurity measures.

Global agreements brokered by unelected, unaccountable bureaucrats must never be permitted to rule any nation.

It is imperative that each nation and territory retain its sovereignty, especially during times of crisis, so that the entire global community can be protected from globally directed policies that primarily benefit powerful financial and ideological stakeholders.

The undersigned respectfully request that all nations and their representatives repudiate such agreements.

We strongly oppose the proposed IHR amendments which would require nations and their citizens to adhere to the dictates of an unaccountable global body.

We oppose any involvement in a treaty, agreement, or other legally binding global document that would hinder any nation’s sovereignty in the area of public health.

We assert that nations and their citizens are best-positioned and -equipped to make health decisions appropriate to their communities.

We demand that the people of each nation be in charge of determining their response to health crises.

As citizens of the world, we defend the rights, freedoms, and privacy of all members of the global community by calling for the rejection of the IHR amendments and the WHO’s attempt to usurp the power and authority of health policy from its rightful place – at home amongst the people.