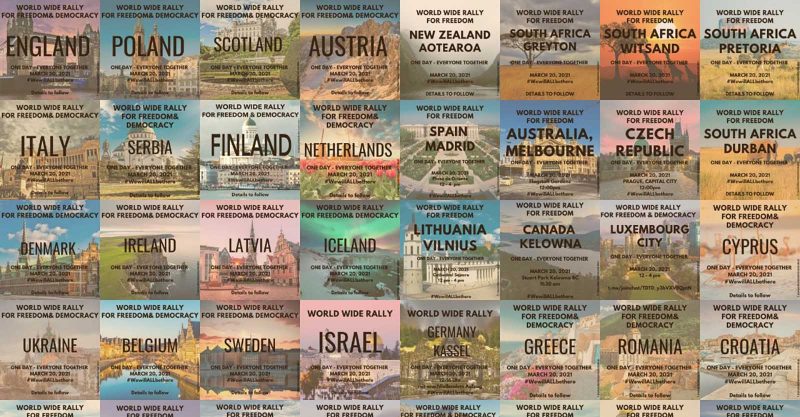 Over the last year, international institutions and governments all over the planet have adopted a response to the pandemic with measures that restrict and control people’s movements at every step and every breath. Arbitrary decisions have been imposed with an avalanche of fear messages and the rule of numbers has replaced the rule of law. Prime ministers and philanthropists keep repeating that ‘there is no other way’.

While the expression of the people’s voices seems to have been completely silenced in most parliaments and consulting assemblies, one can sense it is raising again at the collective level.  Towards the end of the summer, a growing number of citizens all over the world started to protest against the disproportionate ‘coronameasures’ as it became clear that authorities had more interest in controlling the people and pushing the vaccines than in treating the disease and looking for balanced interventions.

Things have evolved very fast from ‘playing the game of social distancing’ to flatten the curve to lockdowns, curfews, quarantine camps with barbed wire, and soon vaccination passports and perhaps even digital bracelets tracking people’s moves.  No this will not lead society back to the free, healthy and happy life once enjoyed.

Understandably there is a lot of anger and country officials currently in place are preparing to face it by recruiting more troops and buying more control technology. If they keep pushing populations into extreme conditions and generate some form of civil war, this would allow them to step in, ‘neutralise’ opposition and implement a new totalitarian ‘reset’ at an accelerated speed.

But in spite of this predictable scenario, things could take a different direction. A truly authentic new form of pacific resistance is emerging.

One on hand it seems that the attention of the public is not only focusing on some ‘big mouths’ who scream out their rage but is gradually shifting to personalities who stay calm and measure their words. On the other hand we see a shift in the way people connect to each other. The old format of  ‘organizations’ with a dominant group of leaders and a formal structure are struggling with identity battles and material issues. Activists are now meeting each other in many different ways, live in local communities and online in international meetings. The network of collective intelligence is growing exponentially and is simply mindblowing. Lawyers, scientists, doctors, activists, journalists, artists, bloggers, people with a variety of skills and expertise come together to find ways to protect our society from this dehumanising drift.

The phenomenon of the world wide demonstrations is an illustration of this new international movement for freedom. People all over the world are coming out on the same day to march for peace and freedom.  It does not matter anymore if there are big stages with big names or if the government will allow it or not.  One way or another, they ‘will all be there’. Every day new groups of people are joining and new rallies are announced in other cities. It’s a ‘Do your own rally’ formula in which everyone is invited to act in full responsibility.

Many people still ask ‘who is organising these demonstrations? Who are the masterminds  ‘behind it’? What do they want?  Some fear of being manipulated. Some want to know who they can trash in a hit piece. Some want to know who to intimidate or arrest. But apart from a common graphic style and a common day there is just not much to get hold on, no leading group with its own agenda.

Of course, a few people have opened up social media channels and a website, but it does not really matter who they are. This is not about endorsing personalities.  It’s simply about sharing common values. When looking at these world wide demonstrations it seems that a form of international grassroots activism is rising.  It is not so much guided by ‘new leaders’, as by a common aspiration to connect with each other and place freedom and peace as the new foundation of a global society.

If this is truly  what’s happening, then that is a real of sign of hope and one can only feel the desire to join in and ‘be there’.