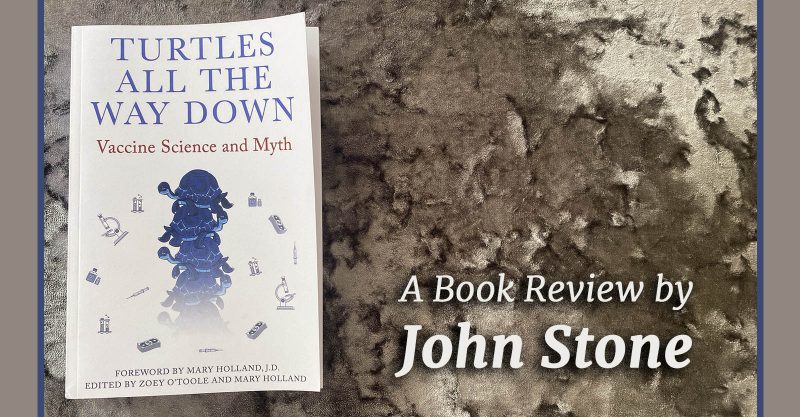 A welcome for this important and paradoxical book. Although it has been edited for an English speaking audience by Mary Holland and Zoey O’Toole it was assembled by anonymous (Israeli) authors providing an anatomy of vaccine science, at least as it existed in 2019 before Covid. It may be considered critical to the understanding of the project that the authors chose to remain anonymous: while of course this meant that they could not be personally and professionally attacked it has also meant that anyone attacking the book has to attack the intellectual substance of the book and not the authors.

While the book is an inventory of failed scientific methodology of various kinds the specific reference is the failure to provide studies which demonstrate the effectiveness and safety of any products on the schedule against genuine placebo ie a neutral substance, as opposed to other products and concoctions (substitute placebos)  – a matter once brilliantly exposed by ICAN’s correspondence with the US government. Faced with the 64 trillion dollar question whether any at all of the products on the infant schedule had been so tested the US government failed to provide a single instance. Not only were none of the products trialled against genuine placebo, none of the substitute placebos had either. What was it all standing on?

It may be mentioned in a somewhat comic sequel to the ICAN episode that three leading proponents of vaccine science, Stanley Plotkin, Paul Offit and Heidi Larson were challenged in the electronic columns of British Medical Journal by Christopher Exley, David Healey and myself just made off into the distance. Not only were these studies lacking for some products they were lacking for all. The problem has been that while for  bureaucratic and ideological purposes vaccines have been placed for the most part beyond criticism as an unalloyed public good this has assisted even greater levels of negligence than perhaps even exist in other branches of medical science as highlighted in famous critiques of John Ioannidis and Marcia Angell. Existing in the realms of state enforced totem and taboo, the science is almost bound to go wrong even supposing it is not meant to, while most professionals simply walk away.

The nub is that for most of its history, going back more than two centuries to Edward Jenner, who also might not have recognised a double-blind placebo trial,  so much has rested on careful gaslighting rather than sound data – quite simply anyone who doubted was in modern parlance “cancelled”, and this in itself had unbounded potential for skewing the evidence base. If you are not allowed to even mention vaccine damage how will cases ever come to be recorded? Scarcely surprising that the authors have chosen not to disclose their identities.

Extract from the Foreword of the book, by Mary Holland J.D. (co-editor)

“In the wake of the COVID fiasco, it is time for a deeper look down the larger vaccine rabbit hole: Are childhood vaccines so different from COVID vaccines? Are they safer? Were they tested any better? Are their injuries better documented and investigated? Are medical professionals (or anyone else) allowed to question them any more than they were allowed to question COVID vaccines? And the most important question of all: Can we entrust our babies to vaccines produced, tested, and marketed by the same agencies and corporations, doctors and government officials, researchers and high-tech moguls that failed us so miserably over the last two years?

You are now holding the book that answers all those questions, and answers them definitively. This book dissects the CDC’s recommended childhood schedule with respect to the issues I highlighted above: the clinical trials, adverse event reporting, recognizing and treating vaccine injuries, vaccination recommendations that are not supported by science, science censored and contorted to support the vaccine agenda, main-stream media vaccine propaganda, and more. Throw in a thorough rebuttal of three foundational vaccination myths, and there you have it – everything you ever needed to know about vaccines, but were afraid to ask.

Turtles All the Way Down: Vaccine Science and Myth was first published in Israel in early 2019. Later that year, it set a worldwide precedent for a vaccine-critical book when a main-stream medical journal published a positive review of it. The article in the September 2019 issue of Harefuah (“Medicine”), the leading medical journal in Israel, was authored by a pair of senior academic criminologists, Nati Ronel and Eti Elisha. To the dismay of the Israeli medical establishment, Ronel and Elisha “found the book to be well written, serious, scientific and im-portant”, offering “a comprehensive view of the issue.” Though heavily criticized by some vaccine doctors as “only” criminologists who should stay in their lane, their appraisal of the book still stands today, unscathed: In the three years since its (He-brew) publication, no medical or medical science professional has succeeded in refuting the book’s claims. Unable to demonstrate that the book or its Harefuah review actually contained any errors, critics – doctors as well as lay people – chose instead to target the review’s authors. The fierce personal attack on Ronel and Elisha for merely reviewing the book served to illustrate one of the major points in their article, that the science and medical establishment resorts to aggressive personal attacks to cover-up inconvenient truth: “It appears that science and medicine are becoming hostile to criticism in ways that are historically associated with the violence of fundamental religious orthodoxy or even inquisition committees similar to those of the Middle Ages. They are convinced they know the ‘truth’ and reject every attempt to question this ‘truth’ as heresy.”

Must-Read Book Asks: Why, After 7 Decades, Don’t We Have Proof Vaccines Provide More Benefit Than Risk?