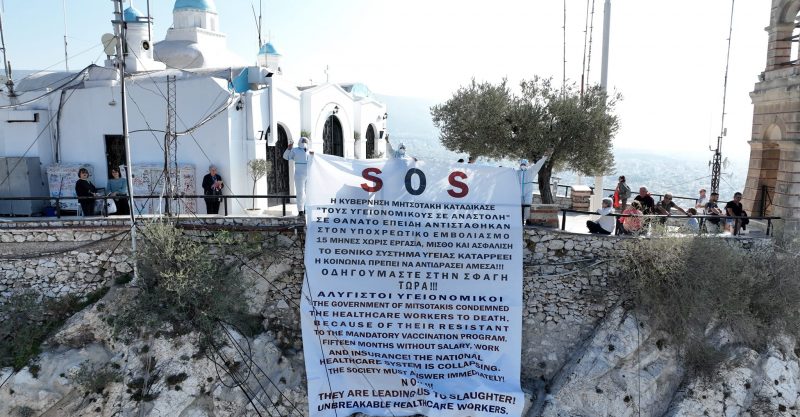 With the release of an open letter calling for the mandatory vaccination requirement for Greek healthcare workers to be rescinded and the privatization of Greece’s public health system to be halted, three such workers that have been suspended without pay since Sept. 1, 2021 due to their unvaccinated status launched a hunger strike Nov. 17.

The three health workers who are participating in the hunger strike — Lampros Tsapalis, Periklis Karolidis and Eirini Katakou — announced their action in a highly visible manner: by unfurling a banner, with a message in Greek and English, on Lycabettus Hill, overlooking central Athens.

The date chosen for the announcement and launch of the hunger strike — Nov. 17 — is also symbolic, as it is the anniversary of the Greek Polytechnic Uprising, a popular movement against Greece’s then-military government, in 1973.

Following the announcement, the three hunger strikers shifted their protest to the exterior of the Council of State — Greece’s highest administrative court — in central Athens.

This move was also symbolic, as they claim the Greek government is not implementing a decision by the court to convene a ministerial committee to review the health workers’ suspensions.

It was outside the Council of State, though, where Karolidis, one of the three striking workers, was detained Nov. 18, just one day after the launch of the strike, apparently for the official purpose of “verification of identity.” He was later released.

A video of the arrest quickly circulated on Greek social media in the hours after the incident. However, there has been barely any coverage of the strike — or subsequent arrest — in Greek media, other than a handful of “alternative” news portals on both the left and right of the political spectrum, and a few social media accounts.

As reported by The Defender, Greek media have received €40 million ($43.6 million) in state subsidies since 2020, purportedly to help keep the struggling outlets afloat—though many in Greece feel that this funding was intended to encourage favorable coverage of the government’s heavy-handed COVID measures.

On the same day as the commencement of their hunger strike Nov. 17, the three suspended healthcare workers in question sent an open letter and accompanying list of demands to the National Association of Public Hospital Employees (POEDHN), questioning the lack of legal support they have provided to the suspended workers.

Arrests and other acts of intimidation toward the suspended healthcare workers are not a new phenomenon in Greece.

In July 2022, 38 such workers were arrested for protesting outside the home of Greek Prime Minister Kyriakos Mitsotakis. They were acquitted by an Athens court last month.

During the overnight hours of Feb. 25, Tsapalis was arrested outside the Greek Health Ministry during his then-hunger strike, purportedly on the grounds of “disobedience” to the authorities.

And on March 30, during a march toward the Greek parliament, riot police fired tear gas at protesters rallying against the suspensions, including the five wheelchair-ridden hunger strikers, one of whom was injured.

The announcement of the hunger strikers

The announcement released Nov. 17 by the three suspended healthcare workers reads, in part:

“Today, the 17th of November 2022, we are declaring a hunger strike for the second time. We have spent 15 months in want! Without a salary, work or insurance! No more deaths! Justice has not operated objectively! Freedom is on the ropes! Democracy has been transformed into a tyranny! We have a holy obligation to restore [our jobs]! From the holy rock of Pnyka [Lycabettus Hill]! Freedom fighting healthcare workers who will not give in! It is up to society to meet its obligations!

“We demand: The immediate revocation of Law 4820/21 [which suspended the unvaccinated healthcare workers]! No to the privatization of the National Health System!

“From Sept. 1, 2021 we have been without a salary or insurance and are legally barred from any other employment, based on the then-epidemiological data that was used to suspend 7,000 healthcare workers in the National Health System and over 15,000 private healthcare workers, pharmacists, dentists, physical therapists, and workers in private and public healthcare facilities.

“The Ministry of Health, for months now, is refusing to abide by the decision of the Council of State to convene a Ministerial Committee which will review the current epidemiological data, in order to then proceed with the revocation of the suspensions, even though most [COVID-19] restrictions have been lifted in Greece and all countries.

“The Council of State, instead of proceeding with sanctions against the government, issued a vague and baseless decision which did not take into account the adverse effects of the vaccines, even though it initially considered this an important piece of evidence and requested such data three times from the Health Ministry, without response.

“Society, remaining in a state of deep fear due to the non-scientific propaganda which continues [to the present time], either ignores the systematic extermination of thousands of households, or is indifferent to this.

“The Church [of Greece], in lockstep with the government’s insensitivity and its fascist policies, refuses to provide any support, either economic or moral.

“The exhausted healthcare workers who continue to work in the hospitals, have been infected by, lived through and transmitted COVID-19, despite their vaccination, as they are required to return to work on the fifth day following infection, even if they continue to test positive. A significant percentage of these doctors are also considered ‘unvaccinated’, as they have not received a booster dose. However, they remain in their positions.

“The hospitals are faltering, operating at the limits of their capacity without enough staff, or are, for all intents and purposes, shutting down.

“The Greek people must, at last, realize what the situation is and must stand at our sides in our holy battle for democracy, justice and freedom for us all. Everyone must act for themselves, for our parents, for our children and for the unborn generations!”

The suspended healthcare workers’ announcement was accompanied by the release of a video, which subsequently has circulated on Greek social media.

In turn, the banner that was unfurled Nov. 17 on Athens’ Lycabettus Hill by the three suspended healthcare workers who launched the hunger strike, contained a message in English reading as follows:

“The government of Mitsotakis condemned the healthcare workers to death, because of their resistant to the mandatory vaccination program. Fifteen months without salary, work and insurance! The national healthcare system is collapsing. The society must answer immediately! Now! They are leading us to slaughter! Unbreakable Healthcare workers.”

Political ping-pong on the backs of suspended healthcare workers, amidst tragedy

While the suspended unvaccinated healthcare workers have actively protested since September 2021, including the organization of a recent rally in Athens’ Freedom Square in September 2022 in which Dr. Reiner Füellmich and Dr. Sucharit Bhakdi spoke, their efforts have been beset by the aforementioned difficulties — and by tragedy.

As previously reported by Children’s Health Defense Europe, an unvaccinated dentist from Athens, known by the initials X.P., committed suicide Sept. 29, unable to withstand the difficulties that resulted from her suspension, including a loss of income and insurance coverage.

Notably, the Greek government has thus far refrained from outright firing the unvaccinated healthcare workers, despite threats to do so. By keeping them in this state of limbo, they are unable to receive a salary or to pursue other employment elsewhere.

With parliamentary elections in Greece scheduled for July 2023 — and the ongoing possibility that snap elections may be declared at any time before then — the issue of the suspended medical workers has turned into a game of political ping-pong, as CHD Europe has previously reported.

Thanos Plevris, Greece’s health minister who had previously been elected under the aegis of the far-right LAOS (Popular Orthodox Rally) political party and who is not a doctor, stated in a televised interview Oct. 16 that the suspension of the unvaccinated medical workers was “one of the most correct decisions” taken by the current government since it came to power in 2019.

However, in a previous interview on Oct. 3, Plevris said the suspension of the medical workers was “being reevaluated.”

Notably, a “far-right” government in neighboring Italy, led by the country’s new prime minister, Georgia Meloni, recently reinstated unvaccinated doctors and healthcare workers who, similarly to Greece, had been suspended from their jobs.