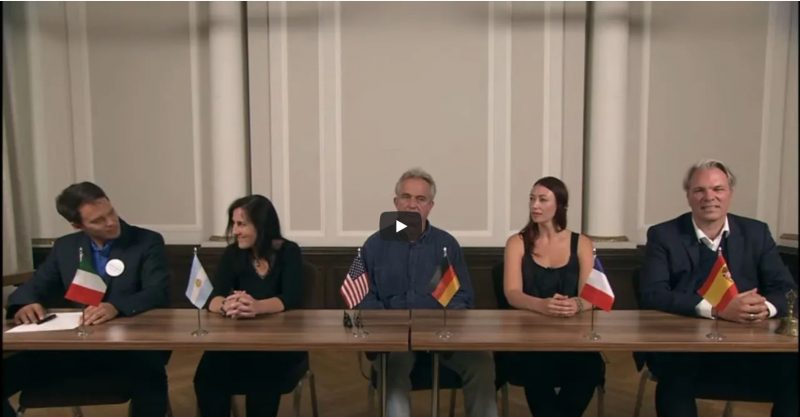 On Friday August 28, 2020, Mr. Kennedy, chair of Children’s Health Defense, held a press conference and met with the leaders of the newly-formed Children’s Health Defense Europe Chapter. In attendance were Senta Depuydt and Tina Choy (board members of CHD Europe), RA Markus Haintz (Querdenken-731 Ulm), and Heiko Schöning (MD, Ärzte für Aufkärung). While in Berlin he will also meet with colleagues from all over Europe to discuss global challenges to health and human rights.

Saturday, August 29th, he will speak to what is anticipated to be the largest crowd in German history. (CHD will be streaming LIVE from our Facebook page.) Over one million people from every nation in Europe will rally for freedom, peace, free expression and respect. 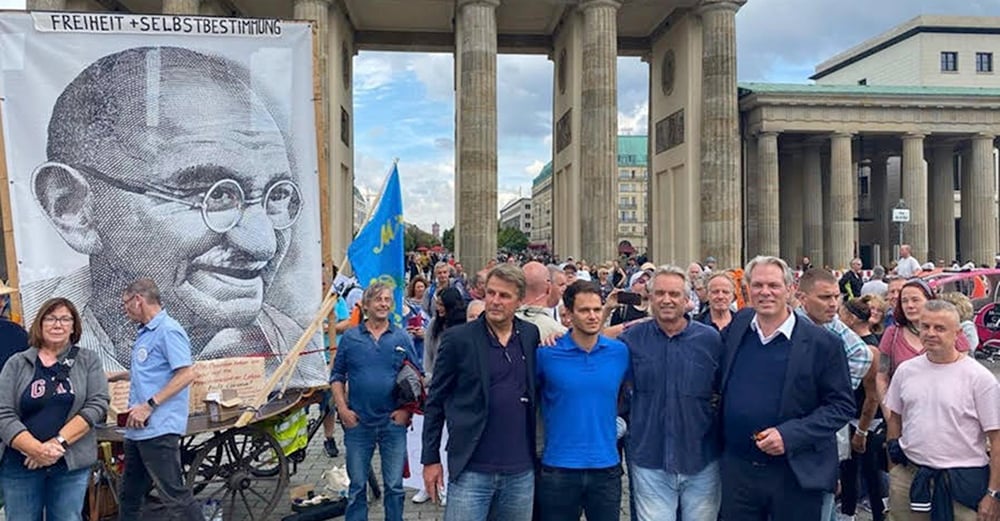 I am Robert F. Kennedy, Jr.

Let me explain to you a little bit about the journey that brought me here.

I run the biggest water protection group in the world. It’s called Waterkeeper Alliance. https://waterkeeper.org/ Back in the early 2000s I was suing big coal burning power plants in the United States for discharging mercury. At that time my only concern was the impact of mercury on fish and on the human health of the human beings who ate the fish.

Around that time it came to my attention that there was also large amounts of mercury in vaccines, much larger exposures to children than any child would ever get from eating fish.

I began to address that and we started an organization that was trying to have a very limited scope which was trying to remove the mercury from vaccines. Little by little I came to understand there were larger problems with vaccines.

The central one and the one we were most deeply concerned with was that vaccines in the United States were not safety tested. They have an exemption that is not available to any other medical product, and that exemption which most people cannot even believe, is an artifact of the CDC’s legacy as the public health service which was a quasi-military agency.

At the time the vaccine program was launched, the purpose was a national defense purpose, and they wanted to make sure that vaccines could be quickly formulated and deployed in order to derail attacks by foreign countries with biological substances.

So they removed the regulatory impediments including the necessity to safety test vaccines against placebos.

So my very narrow purpose in starting the Children Health Defense was to address this problem and to get vaccines properly safety tested, because if they’re not safety tested, nobody can tell you with any medical authority whether that vaccine is injuring more people than it’s saving.

As we continued on with this advocacy it became very clear that there were other problems as well.

There [were] problems with the corruption in our political system. The pharmaceutical companies had not only corrupted our politicians with huge amounts of lobbying money, they had captured the agencies that are supposed to protect Americans from public health threats: the CDC, the FDA, the HHS.

They had captured the press in our country by huge influxes of advertising dollars which had neutralized the press.

They had effectively subverted American democracy by neutralizing all of those institutions that the Founding Fathers of our nation had created to stand between a greedy corporation and a vulnerable child.

The Congress had been corrupted. The regulatory agencies were captured; they had become the sock puppets for the industry they’re supposed to regulate. The press had been sidelined.

And worst of all, they had passed a law in our country in 1986 that gave pharmaceutical companies complete immunity from liability. So there was no incentive for any of those companies to make vaccines safe.

Little by little we recognized that this was not just an American issue. This was a global issue.

Two years ago when I was arguing the Monsanto case and I met my partner here Senta Depuydt. Senta already understood the connection that had taken me so long to formulate between toxics in our environment, the capture of our agencies, our political structures by those powerful companies.

She also recognized that pharmaceutical companies were the most powerful, more powerful than oil, more powerful than the chemical industry, and a greater threat, not only to our children’s health but to all the institutions of democracy, not [only] in the United States, but all around the globe.

And I’m very glad that Tina Choy helped Senta to organize Children’s Health Defense Europe. We are here today to announce the launch of the beginning of this organization. We’ve been very, very successful in the United States, but we recognize that the pharmaceutical industry is operating and capturing politicians, running governments in every nation on the globe.

If we win this battle in just one nation, the United States, we’re still going to lose it globally. So we need people of good will, people who have courage, people who have a nonconformist way of thinking, who understand that we are being lied to, that the entire political structure today is saturated in pharmaceutical propaganda.

We have watched over the past few years something that is extraordinary. We are at an inflection point, I believe, in human history, the largest and most critical inflection point in that humanity has ever encountered.

For many years totalitarian or authoritarian states have used the power of fear to engineer compliance in populations. I grew up understanding what happened in World War II in our country. During the Nuremberg Trials, Herman Goering was asked by the prosecutor, how did you make the German people comply? Goering said, it’s not just Germany, this works in any country, whether it’s a fascist country or a communist country or a monarchy or a democracy. All the rulers need to do is to tell the people that there’s something they need to be fearful of. Point a finger at that source of their fear and you can make human beings do anything you want. You can make them go to the slaughter like sheep; you can make them obey.

During the same Great Depression that spawned Adolf Hitler we were very lucky in our country that we had a leader, Franklin Roosevelt, and he said, “The only thing we have to fear is fear itself.” He understood that fear would drive us into totalitarianism.

With the biosecurity agenda that people like Bill Gates and Anthony Fauci and Davos, and all these people who are running now the global economy, they have understood for years that they have a power that no totalitarian government has ever had available to it, which is the  biosecurity.

Hitler could point at the Jews and say those are the big threat, we need to be frightened of them, and everybody else needs to obey so that we can fight them off. Other countries were scared of the Bolsheviks.

In the United States, our demigods point to the Mexicans or dark-skinned people and say we need to be scared of them, or terrorists. All of those things get us to voluntarily give up, relinquish our human rights, our civil rights and walk like sheep into the Abattoir.

Now they have a source of fear that is the most pervasive, an all-encompassing power that they’ve ever had which is the fear of pandemic.

Today we have an inflection of new technology that give governments the capacity to impose controls on populations that have never been imagined before in human history by any tyrant in history.

We have 5G which has created a surveillance state. 5G is not here for your benefit. It’s not here so [it can] make your life better because you can download your video games in 6 seconds rather than 29.

The only reason for 5G is because it allows these big data companies run by Bill Gates and Mark Zuckerberg and Jeffrey Bezos to harvest our data, to listen to your conversations on your  cell phone. They’ve always been able to do that, but there was no way for them to transport that data to subject it to analytics and then to monetize it and then to sell it.

Bill Gates today is building a city in Arizona, 80,000 people, with a data center that will be able to take all of this new data, the data on your Alexa in your home. You think that Alexa is working for you? She is spying on you. Your cell phone is spying on you. They have biometric facial recognition systems. Your GPS—

Bill Gates brags that his satellites will be able to monitor every square inch of the planet 24 hours a day.

Many people argue that this pandemic was a plandemic, that it was planned from the outset, it’s part of a sinister scheme. I can’t tell you the answer to that. I don’t have enough evidence. A lot of it feels very planned to me. I don’t know, but I will tell you this, if you create these mechanisms for control, they become weapons of obedience for authoritarian regimes no matter how beneficial or innocent the people who created them.

The Nazis did that in the camps in World War II. They tested vaccines on Gypsies and Jews, and the world was so horrified after the war, we signed the Nuremberg Charter. We all pledged when we [did] that we would never again impose unwanted medical interventions on human beings without informed consent. Yet in two years, all of that conviction has suddenly disappeared. People are walking around in masks when the science has not been explained to them.

They are doing what they’re told.  These government agencies are orchestrating obedience, and it is not democratic; it’s not the product of democracy.

It’s the product of a pharmaceutical driven, biosecurity agenda that will enslave the entire human race and plunge us into a dystopian nightmare where the apocalyptical forces of ignorance and greed will be running our lives and ruining our children and destroying all the dreams and dignity that we hope to give to our children.

I am very proud of the people I’m sitting at this table with who are people who have the courage to challenge, to speak truth to power and to think independently, and to break away from the orthodoxies that are enslaving so much of the human race.