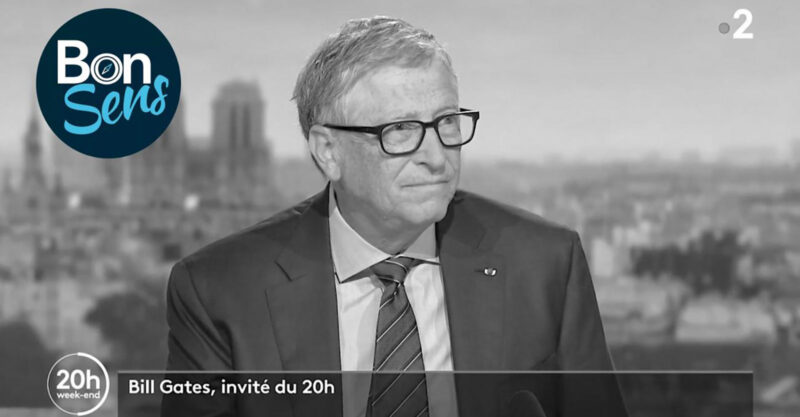 The association BonSens.org and three of its administrators have summoned the co-founder of the multinational Microsoft Bill Gates before the judicial court of Nanterre through their lawyer Diane Protat. After this summons was duly delivered to Mr Gates’ American home, the American law firm K&L Gates, a Seattle firm founded in 1883, one of whose main partners was William H. Gates, father of Bill Gates, was appointed lawyer on 6 September and will represent the billionaire in this case. The hearing will take place on 22 September 2022 at the Nanterre judicial court.

Reminder of the facts

On 6 May 2022, Bill Gates was invited to appear live on the 8 o’clock news on France 2 to promote his new book ‘How to avoid the next pandemic’. During his interview, he accused the “conspiracy theorists” of having “completely turned the tables on me by saying that I earn billions to kill people“. He denounced: “In a way, it’s quite humorous, but it’s also problematic. It discourages people from taking the vaccine and it’s our best tool to prevent deaths. And in this case, it becomes something tragic and I would like to see the facts come out, it’s a great vaccine and we were trying to do our best to save lives, that’s all.” The billionaire was quick to assure that the people who were dying from Covid-19 infection were the non-vaccinated: “If you look at the people who are dying. In fact, it’s the people who are not vaccinated. We know that even vaccinated people, if you’re old, you probably need a booster, but it’s a miracle that has prevented millions of deaths.”

Reason for the referral

With these remarks, the plaintiffs believe that they were deliberately and maliciously denigrated by the billionaire at prime time in front of millions of viewers on one of the most watched public channels in France. As such, Bill Gates is liable in tort against them, the plaintiffs explain: by committing anathema and maintaining that the “conspiracy theorists” are endangering the lives of others by sowing doubt about the effectiveness of the Covid-19 vaccines, thus “discouraging” the general public from taking them, the idea is then insinuated into the minds of viewers that the social or legal actions undertaken by the plaintiffs or the association BonSens. org, would be harmful to the population.

They also pointed out that, as Mr Gates himself had admitted on 3 May, i.e. three days earlier, vaccines against Covid-19 were ineffective in that they did not prevent the transmission of the virus between individuals, which was the primary aim of a vaccine.

In addition, he posted on his Twitter account on 10 May 2022 that he had contracted Covid-19, but considered himself lucky to be vaccinated.

Regardless of the estimated 99.98% survival rate of the virus and the existence of scientifically proven early treatments for the disease, there are no studies showing that people who die from Covid-19 are unvaccinated people. Also, “Mr. Bill Gates intentionally lied to millions of France 2 viewers on May 6, 2022 when he claimed that Covid-19 vaccines are ‘excellent vaccines’ that work,” the plaintiffs hammered in their complaint. On the other hand, they argue that they are among those who “allow the dissemination of clear and fair information on the benefits and risks of these vaccines“.

In anticipation of the opening of the legal battle on 22 September, Xavier Azalbert and his lawyer Diane Protat, were interviewed on 9 August by the American magazine ‘The New American‘, to whom they gave their analysis of the ins and outs of the summary proceedings against the founder of Microsoft.