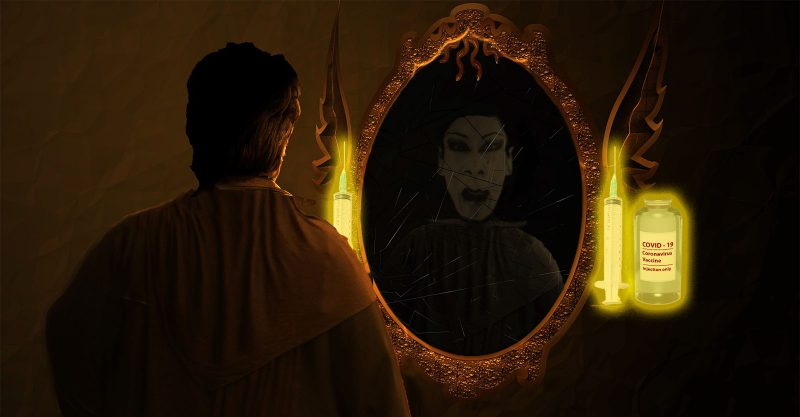 Nicole Delépine, paediatrician and oncologist, responds to an article in The Mirror, as published on msn.com, about a curious Romanian marketing campaign for Covid-19 vaccines. You can read it here.

During the Black Death (the real one, which decimated millions of Europeans; not the one invented by our Minister of “Health”—to give him his official title) peasants fled from their infested villages as the dead were piled high.

Do you think, if an effective treatment had been available, it would have been necessary to convince people of the need for miracle treatments?

Yet, here in the 21st century, we get to see it all. From the €25 bonus to the beer voucher, or the 20 extra points French journalist Bernard Pivot suggested for school pupils sitting their final exams (a joke, surely?), legion are the carrots dangled before guinea pigs in fear of the jab, with its inconvenient lack of obvious benefit.

The fact is that the covid vaccines are in the experimental phase and citizens are increasingly aware of this. Big Pharma, to be fair, is doing pretty well. It doesn’t have to pay its guinea pigs for starters. Normally one would receive several hundred euros for taking part in a trial. Moreover, the health agencies and government have relieved pharma companies of any penal or financial responsibility in case of mishap… including death. Instead government will pay using… taxes paid by the jabbed, dead and injured. It’s going to be a great year for Big Pharma!

As for the covid epidemic, coming to its natural close, having mysteriously replaced the flu in the process, the population must of course remain in a state of panic. The financial rewards from vaccination for Big Pharma are as fantastic as the political gains for the leaders of the New World Order, who now freely impose liberticidal laws and increase police surveillance.

We should really admire the commercial nous of the vaccine merchant. It’s obvious this is no longer a question of medicine, but of commerce and therefore of marketing.

In the Mirror article we learn of the vaccination of Romanians at Dracula’s castle. With the absurd misery of it all laid bare, one doesn’t know whether to laugh or cry. In spite of the tragedy, knowing as we do the various possible side effects, including death (nearly 9,000 European dead post-vaccination, many of whom were at zero risk from covid. In addition, since 27 April 2021 the European Medicines Agency and EudraVigilance has already recorded 2 million incidents of side effects in the EU alone excluding the UK, all likely from covid “vaccines”) and outbreaks in countries previously free of the disease after the commencement of vaccination campaigns.

The pseudo-vaccine of Castle Dracula

Looking at the article, we see the usual terminology is present and correct. Romanians are “jabbed” at Castle Dracula in Bran. I’m retired now but in my time we would say “vaccinate”. Sometimes we’d also say “put down”, though that was reserved for animals euthanized at the end of their life by the vet. Jabbed… Must be quite the medical treatment programme at Castle Dracula!

Then we learn about the carrot offered to the guinea pigs—free access to the castle’s medieval torture exhibition—and must ask: why is this form of encouragement necessary? Did we do the same for DTPolio? Perhaps there was less need for mystery and threatre with that “jab”.

But, worst of all, just like children who get a swimming badge or a road safety certificate, the jabbed receive a diploma. But attesting to what? Well, “their courage and responsibility”. But if this pseudo-vaccine is harmless, as the media would have us believe, how are they courageous?

Anyway, the brave guinea pigs who make their pact with Dracula will receive an almost-eternal reward: access to his castle for the next hundred years. It makes one wonder whether the ghost of Faust is haunting Castle Dracula.

Who is behind these Faustian goings-on?

Well, it couldn’t be a doctor. He would explain the advantages (if he could find any compared to much safer, early treatments) and possible disadvantages of these products, such as the frequent side effects; much more frequent than with the flu vaccine, as reported by the European Medicines Agency.

No, it couldn’t be a doctor. He would honour the Hippocratic Oath and the Nuremberg Code, sanctified by the Helsinki Declaration and the Oviedo Convention.

No, here in Bran, as in Disneyland Paris, we are in the business of fun. So it’s the MARKETING director who’s in charge. Obvious, isn’t it? As advertising leaves no room for doubt, the director arranges for guinea pigs to visit the fortress ‘torture room’. How appealing this must be to tourists!

Here deep in the Carpathians, at the home of the Vlad ‘The Impaler’ Tepes, a bloodthirsty 15th century Romanian prince and the inspiration for Irish writer Bram Stoker’s memorable character, Dracula, the Romanians are speaking, whether voluntary or unconsciously, in powerfully metaphoric terms.

As in the USA, and in France in particular, not everyone is keen to become an unpaid guinea pig in history’s biggest ever drug trial—a trial of drugs whose predecessors (attempted vaccines against the SARS and Mers viruses) killed test animals.

With the covid vaccine however, the laboratories skipped the animal stage. There was an unfortunate lack of laboratory animals and a number of activists opposed to animal suffering. It would help if these associations would include human animals in their fight for justice.

Meanwhile, through vaccination drive-ins and 24-hour vaccination marathons in historical locations like Royal Palace in Bucharest, pressure is piled on the Romanians who already resisted repressive measures. Why not in hospital wards?

No, it’s rather like the Long Night of Museums! Those under 50 (of whom less than a thousand died in France in the last fourteen months from this easily treated disease, when treated early), travel with their families. It’s a Sunday outing. It’s a vaccination circus.

And as everywhere else, the vaccination campaign is accompanied by a rise in deaths.

Beatrice Mahler, director of the Marius Nasta Hospital in Bucharest, says that nearly 3.6 million of the 19 million Romanians have received at least one dose of the coronavirus vaccine. She wants to reach the 5 million mark by early June.

But why? For whom? Under what pressure? At least we know the reason for Stella Kirikiades’ enthusiasm, the Cypriot Minister of Health of the European Union who signed the contracts for the covid vaccines with the pharmaceutical companies and whose private bank account has since been credited with 4 million euros. Now there’s a nice carrot.