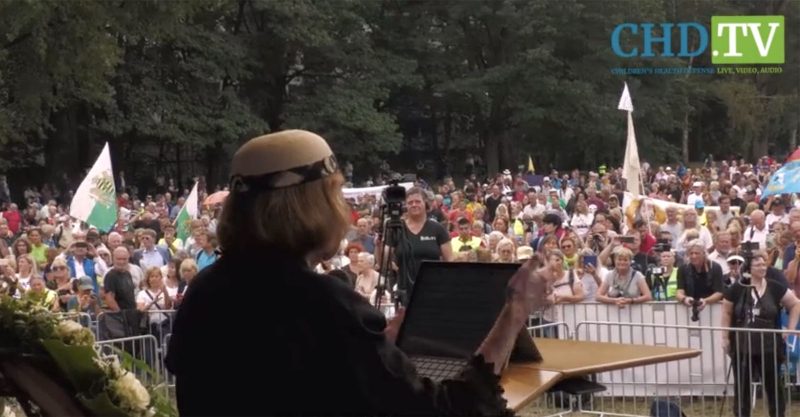 A serious incident took place in Nuremberg last  week. Feel free to share this information. This kind of abuse must not be tolerated.

Vera Sharav, born a Romanian Jew [US citizen, living in NYC], Holocaust survivor and founder of the Alliance for Human Research Protection, an organisation dedicated to protecting victims of ‘clinical’ trial, was the guest of honour at a ceremony marking the 75th anniversary of the Nuremberg Code. The organisers had to promise that no reference to the current vaccination campaigns or to the Coronavirus crisis would be made, as the authorities consider such comparisons an offense to the memory of the victims of Nazi experiments.

Vera Sharav was deported to a concentration camp in 1941. Her father died there after only a few months. She herself survived starvation for three years before being evacuated, with other children, in 1944. Four years later, she was finally reunited with her mother.

This event was Vera Sharav’s first visit to Germany since the end of the war, and she went there not without apprehension. She nonetheless made the trip from New York, believing it to be her duty to remind people of the importance of respecting medical ethics and individual human rights, which are the pillars of our democratic societies.

If anyone has the right to speak freely in this context, it is Vera Sharav. And yet, the unthinkable happened.

The city of Nuremberg did not even bother to take part in the commemoration. It even tolerated – to not say encouraged – a “counter-demonstration by citizen groups” opposed to the ‘revisionist comments which minimise the suffering of Holocaust victims’ and also statements attributed to associations criticising the pandemic health measures. Above all, however, the following day, a local newspaper, the ‘Nuremberger Nachrichten’, dared to accuse Mrs. Sharav of having contributed to such offences by comparing the vaccination campaigns to Nazi crimes.

This is not only outrageous, but it is abundantly clear from her speech that this is a gross misinterpretation of what she said. Rather than speak of Nazism, Vera Sharav denounced eugenics, a perverse ideology implemented with the participation of the scientific and medical authorities of the time. Recalling that Jews were first excluded from social life under the pretext of being vectors of disease before being locked up in ghettos ‘for reasons of public hygiene’, she highlighted the fact that preparation for the Holocaust had begun over a decade earlier with discrimination and progressive suppression of rights and freedoms under the cover of ‘pseudo-science’. A fact unknown or perhaps forgotten is that eugenics policies were implemented long before the war. In Germany, government doctors euthanised thousands of German children, orphans and disabled people, before eliminating the elderly in care homes because they were considered useless mouths to feed. In the United States, people with mental or physical disabilities, and certain ethnic groups in dire straits were victims of forced sterilisation campaigns. The practice continued into the 1980s.

So yes, as Vera Sharav stated, the Nuremberg Code is primarily a safeguard for future generations. It was written to be followed in order to prevent science and medicine from being used for authoritarian, discriminatory and eugenic policies ever again. This is why it has been included in whole or in part in the constitutions or texts of various nations. And that is why her speech ‘Never Again is Now’ is a warning against the dangerous paths being taken today by  our current governments.

Of course, not everyone shares that opinion, and it is understandable that other doctors or organisations might be shocked by the mention of similarities between the excesses of the time and today’s health crisis measures. If, however, the aim is to honour the memory of the victims and the spirit of Nuremberg, shouldn’t we work towards a dialogue on these issues and respect each other’s identity and opinions?

Instead, the local news chose to censor and denigrate this great lady. Shockingly, it even stooped so low as to call Vera Sharav a ‘Romanian, presented as a Holocaust survivor’. Suddenly, the Jew is no longer a Jew. She is ‘only’ Romanian. And she is ‘presented as a Holocaust survivor, as if it were a sham, as if they were refusing to recognise what she had gone through. Finally, the fact that Vera Sharav has worked her whole life to preserve respect for medical ethics and to protect the weakest was also ignored… This is a low blow, a very low blow.

Two days later, Vera Sharav was scheduled to speak at a demonstration in Munich. Speechless, she had nothing left to say.

To honour the courage and action of this brave lady and to ensure that our rights are respected, please share this article. Never again is now.

Dedicated website for the Commemoration – 75th Anniversary of the Nuremberg Code.