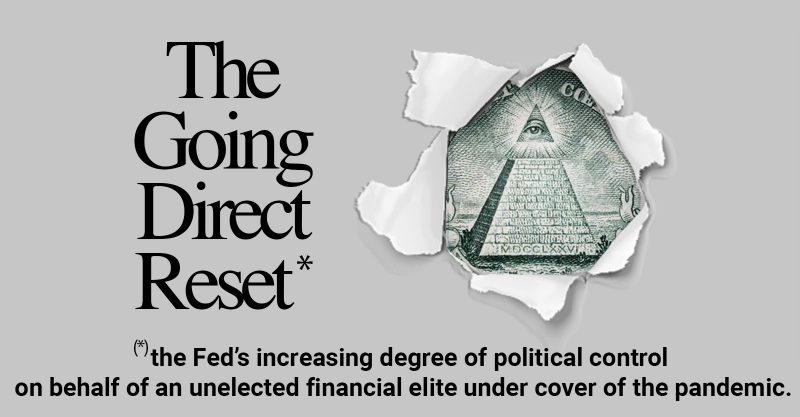 This article has been first published in The Solari Report.

The “novel” coronavirus pandemic marks the greatest turning point in U.S. monetary history since the creation of the Federal Reserve in 1913. In large measure, the “novel” coronavirus pandemic narrative serves as a convenient cover story that distracts from and even masks the Federal Reserve’s unprecedented maneuvers in 2020—maneuvers that happen to have been planned and discussed in August 2019 some four months prior to the first mention of any “novel” virus in Wuhan, China.

What marks the Fed’s maneuvers in March 2020 as unprecedented really is not its sudden creation of $3.5 trillion in reserves; that amount, $3.5 trillion in a few weeks, was unprecedented to be sure, but that’s merely a matter of degree: the Fed created over $1 trillion in the space of a few short weeks back in September 2008 during the global financial crisis (GFC). In that light, and purely in terms of reserves, the Fed’s sudden creation of $3.5 trillion beginning in March 2020 wasn’t novel at all; it was merely bigger than what it had done starting in 2008.

No, what made the Fed’s 2020 pandemic maneuvers novel was what the Fed did with its new reserves: it disbursed them so as to cause the parallel, mirror-image creation of $3.5 trillion in new bank money. That simply did not occur during the GFC. This is the defining feature of the Fed’s 2020 pandemic maneuvers. To understand this, however, requires at least rudimentary knowledge of the split-circuit debt-based monetary system1 that’s in place in nearly all parts of the world (the exceptions all coming, curiously, in “anti-USA” flavors like the Taliban, Libya, etc.).

This is easy enough to understand, but it doesn’t explain why two separate circuits of electronic money are needed. To understand why another circuit needs to be added, we need to consider the things that Tom might do with his new $100 account money. One of those things, and this is what necessitates the addition of a second monetary circuit, involves the transfer of some or all of the new $100 to another commercial bank—call it Bank B (Tom’s bank being Bank A). This might occur if Tom proposes to pay Jerry $100, and Jerry banks with Bank B.

Because the $100 in Tom’s account is legally an IOU from Bank A to Tom, Bank B is not—without more inducement—going to willingly take on Bank A’s IOU as its own. Bank A would be perfectly fine with that proposal, as it would convert $100 of liability into $100 of equity and thereby fatten Bank A’s bottom line. Contrawise, however, Bank B’s liabilities would increase by $100 and its equity would be reduced by $100. So without more of an incentive, Bank B would simply refuse the transfer of Tom’s $100 account at Bank A to Jerry’s account on the liability side of its own balance sheet.

There are any number of ways that Bank A could make this happen. Bank A could send over to Bank B $100 in cash. That way, Bank B’s balance sheet would increase by $100 on both its asset side (with $100 in new cash) and its liability side (with $100 in Jerry’s account). However, cash is physical and slow, when what’s really needed is electronic and fast.

And this is where reserves come into the picture. Reserves are electronic IOU money too, but the issuer of reserves cannot be a commercial bank because commercial banks’ IOUs are liabilities, when what is needed to make the transaction work is an electronic asset.

This duality is reflected in the Fed’s monetary data. Wholesale money is shown in blue (digital liabilities on account at the Fed), and retail money (cash plus bank money, or M2) is shown in green [As noted, cash is included in M2. If cash were backed out of the graph, leaving only (electronic) bank money, it would merely offset the level of the green line without altering its essential shape]. 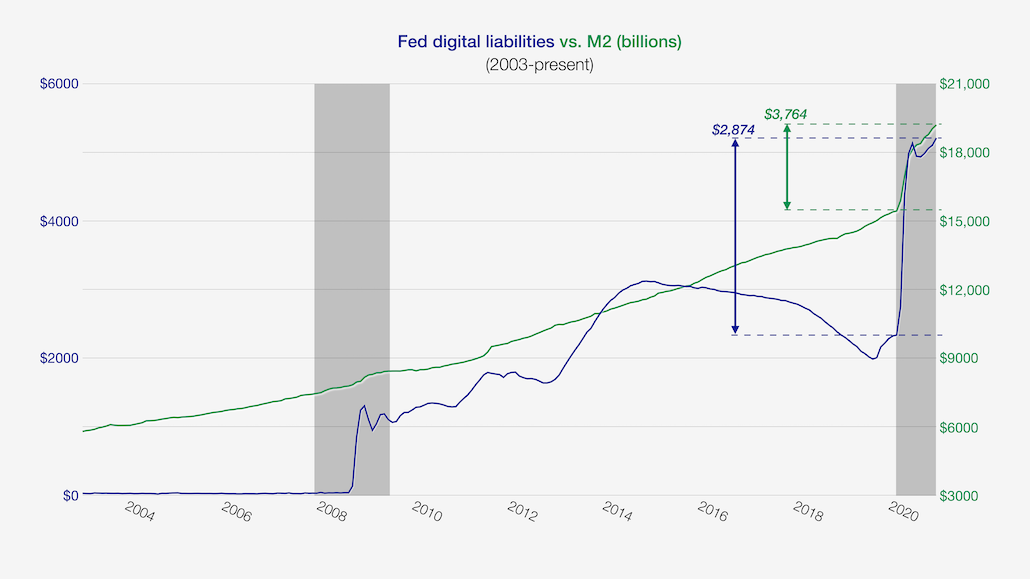 Figure 1: The fundamental difference between the GFC (big gray bar) and the pandemic (small gray bar) is the use of reserves to lever up retail money (green line) in 2020, which did not occur during the GFC.

To understand the mechanism used by the Fed to effect the parallel increase of retail money in response to new reserves in 2020 but not in 2008, see the author’s video, “Quantitative Easing Is the Biggest Sham Ever,” which walks through the transaction structures used to pull off this David-Copperfield-like feat of financial legerdemain.

The magnitude of the Fed’s shift in monetary policy in 2020 is remarkable all by itself, to be sure. For the first time ever, the Fed used its power to create new reserves in the wholesale monetary circuit to effect the parallel creation of new bank money in the retail circuit, and it did so to the tune of about $3.5 trillion.

But there is something else about the Fed’s actions in 2020 that makes them independently remarkable in a truly breathtaking way: while the Fed insisted throughout this episode that the extraordinary actions it took were all emergency measures necessitated by the onset of an alleged virus pandemic beginning in December 2019, the irrefutable fact of the matter is that the Fed’s novel and extraordinary acts were carried out in accordance with the plan presented to the Fed on August 22, 2019—four months before anyone had ever heard of SARS-CoV-2.

What’s more, this plan was presented to the Fed by BlackRock, which the Fed later appointed to assist the Fed in executing the $3.5 trillion plan. To put it bluntly, the actions taken by the Federal Reserve starting in March of 2020—actions that represented a massive departure from the Fed’s responses to crises before that time, as we have just seen—are exactly what BlackRock told the Fed to do in Jackson Hole, Wyoming over half a year before the World Health Organization (WHO) declared a pandemic. It was in August 2019, months before the first coronavirus story broke, that BlackRock instructed the Fed to get money into wholesale and retail hands when “the next downturn” arrived—which, as luck would have it, occurred less than a month later.

This was, in its essence, BlackRock’s “going direct” plan [see Elga Bartsch, Jean Boivin, Stanley Fischer, and Philipp Hildebrand, “Dealing with the next downturn: from unconventional monetary policy to unprecedented policy coordination,” BlackRock Investment Institute, Aug. 15, 2019], and it anticipates exactly what the Fed began doing—quite successfully—under the cover of the pandemic. Thus, when the WHO officially declared the onset of the pandemic, it provided perfect cover for the Fed to implement BlackRock’s plan, under which the Fed effected the creation of $3.5 trillion in retail bank money to buy low-yielding bonds from the Fed’s billionaire buddies, who then turned around with the proceeds and put them to work in special purpose acquisition companies (SPACs) and high-flying stocks.

In a nutshell, the arrival of the 2020 pandemic was about as accidental as an assassination. The pandemic narrative is nothing but a cover story to conceal from the public what in reality is the biggest asset transfer ever.