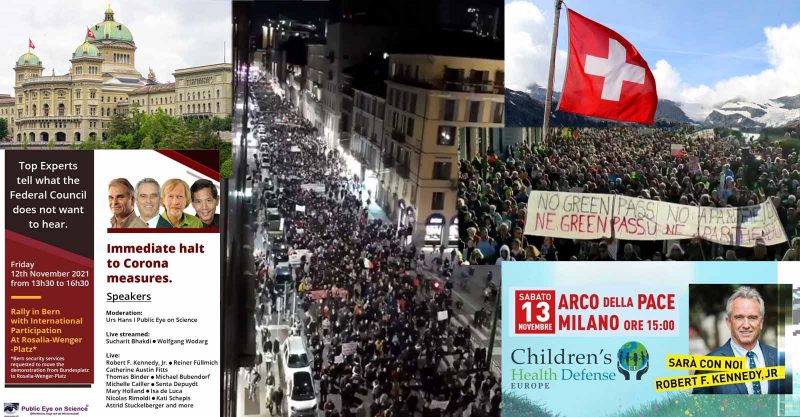 The importance of Switzerland and Italy

On Friday, November 12, Robert F. Kennedy, Jr. will participate in the national demonstration in the Swiss capital of Bern, where a crucial battle for the future of democracy in Europe will take place. Faced with the restrictions on freedoms put in place by the federal government during the pandemic, the Swiss people, led by the ‘Friends of the Constitution‘ from various cantons, have demanded a national referendum. A rejection of the health policy in Switzerland would mark a first victory in the resistance to the global totalitarian agenda and would give a strong signal to European nations.

Switzerland is at the heart of the battle for democracy, as it is in an ambivalent position. Its constitution, which governs the Confederation of 26 cantons, is inspired by the American constitution, and makes it the most democratic state in Europe. In addition to the broad powers of autonomy enjoyed by the cantons, the political organisation is based on a unique form of direct democracy, thanks to the citizens’ rights to vote and their ability to call for referendums, if enough people demand them.

The fact that Switzerland is not a member of the European Union, and that it uses its own currency makes it a champion of sovereignty, but paradoxically it is home to the headquarters of all the international organisations that today demand centralised global governance.

Switzerland is a haven of banking and business secrecy and has benefited greatly from the facilities it has granted to mega corporations (e.g. Google, HP) and international organisations that have so far avoided seeking to impose overly restrictive policies on this host country. In Switzerland, there is no medical association, no vaccination requirements, no containment measures. The Swiss have always found ways to escape wars, famines and totalitarian regimes.

But in recent months, the pressure of the health agenda has been felt, and although the government promised never to implement a health pass, it is now backtracking and vaccination is being pushed to the limit.

Now the trust that citizens had in their politicians is broken. And in such a context, it is crucial for Swiss citizens to push for the full measure of implication in this crucial referendum.

The participation of Robert F. Kennedy, Jr. and Mary Holland in the Berne event, as well as other foreign speakers, such as the German lawyer Reiner Fuellmich, Prof. Wolfgang Wodarg, a former member of the European parliament, and Prof. Dr. Sucharit Bhakdi will explain their perspectives on what it means to be free and how the current situation has proved to be a Global Coup d’état, operating under the guise of a response to the pandemic.

The referendum on 28 November will be a tug of war between the spirit of independence of citizens and the claim to power of the actors of a new world order such as the World Economic Forum in Davos, the World Health Organisation and the GAVI alliance in Geneva, and the ‘bank of banks’, the Bank for International Settlements in Basel.

Although it started late, the resistance movement has reached a large part of the population in the different cantons and the possibility of winning the battle is real.  If successful, Switzerland would become the first country to reject sanitary measures and return to the path of democracy, inflicting a stinging humiliation on the arrogant hubris of the reset popes, Schwab, Gates, Fauci, Tedros and their accomplices.

Unlike Switzerland, Italy, where the first cases of coronavirus were reported after China, is the country in Europe where the health measures were not only the first to be imposed, but also the most extreme. The initial terror experienced by Italians at the threat of the pandemic and the succession of draconian measures that were imposed aggravated the economic stagnation and social crisis in which the country was already immersed.

The appointment of Mario Draghi, former head of the European Central Bank, as Prime Minister pushed Italy towards the accelerated implementation of the Grand Reset and its goal of permanent and centralised control.

In September of this year, doctors were subjected to compulsory vaccination and threatened with a sanctioned measure that would remove their right to practice medicine. The current restrictive health pass was then introduced despite a very high vaccination rate among the general population and it has now even become a requirement for access to the workplace.

Millions of people are opposing the discrimination and the mandatory vaccination, throwing the country into chaos. Driven to desperation, the people are more divided than ever, between those who fight to defend democracy and those who hope that increasing restrictions will allow a return to normal life.

Moreover, a significant part of the population is aware that beyond the health situation, the pass is destined to become a digital wallet, i.e. an instrument of economic control, through the introduction of the digital euro combined with continuous monitoring, similar to the social credit system used in China. In the Italian universities, many professors and students are revolting against this Orwellian future, some of them giving lectures in the public square, since they are not allowed to enter the auditoriums.

Demonstrations against the pass are held every week in most cities and are often violently repressed. Recently, dockers in the city of Trieste went on strike for several days, blocking one of the most important commercial ports of Europe. The images of their courageous and peaceful resistance moved the world. The eyes of Europe are now on Italy. If Italy falls, other countries will follow.

In the face of this explosive and anxiety-ridden situation, the majority of politicians have submitted without resistance to the ‘4th industrial revolution’. Reforms presented by the World Economic Forum put forward falsely as the only way out of the pandemic and economic collapse.

In this context, it is essential that the Italian people become aware without delay of the reality of the emerging global agenda and the rise of an international resistance movement against it. On Saturday 13th, Robert F. Kennedy, Jr. will be in Milan alongside those demonstrating against the use of the health pass. He will testify with human rights lawyer and professor Mary Holland about the legal actions taken in the United States and the resistance put up by many states, determined to defend the constitutional rights of the American people. Kennedy exposes the fraud and shameless profiteering of the US based medical mafia who operates a stranglehold on global public health through the pandemic response.

His recent appearance on Italy’s national TV channel La7, the forthcoming release of a book questioning health policies, and the millions of people who relay his information every day are proof that the tide of information is turning and the public and the political class may soon wake up.