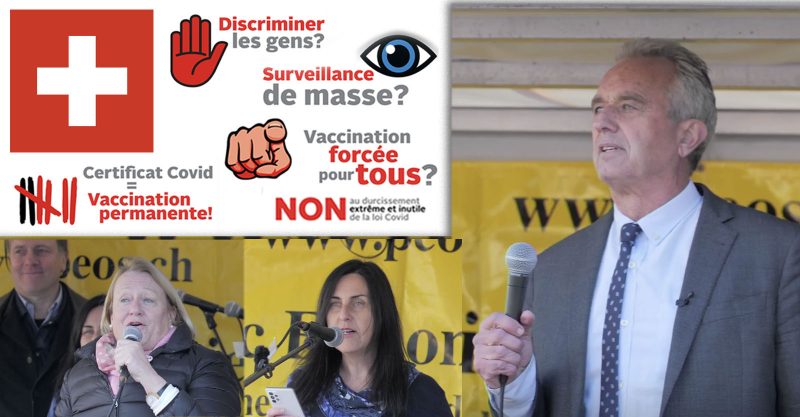 « Will Switzerland remain the last Bastion of democracy and the shining beacon for the world, possibly influencing the people of the rest of the world – calling upon them to wake up and by demonstrating peacefully through non-obedience toward a halt to this biblical crime – which frankly seeks to wipe out humanity? »

It is in these clear and strong terms that the lawyer Robert F. Kennedy, Jr. addressed the Swiss during the demonstration of November 12, 2021, which took place in Bern. Moved by the importance of the issue at stake, the famous American lawyer, nephew of the former president of the United States, flew to the capital at the last minute to support the people and the ‘friends of the constitution‘ in their effort to reject the Covid law, which had been approved by the federal parliament on the sly last September. Despite the fact that the Covid measures taken during the pandemic have been rather light compared to other European countries, which may have reassured many citizens, this new Covid law is a hidden attempt by the federal government and international organizations to establish a regime of exception. It would allow them to impose their diktats until 2031, a date that coincides with the 2030 sustainable agenda planned by the World Economic Forum.

In Switzerland, the popular vote of November 28, 2021 has already started. A majority of citizens are already voting by mail, while others will go to the polls on November 28. Three objects are on the agenda: an initiative to strengthen nursing, an initiative on the appointment of judges by lottery and the ‘amendment of the March 19, 2021 Covid-19 law’. This text implies the approval of the Covid Certificate or ‘health pass’ and the imposition of an exceptional regime that violates the constitutional rights of citizens and the competencies of the federated entities, bypassing the democratic process, but without stating it clearly.

To add insult to injury, the acceptance of the deprivation of freedoms is presented as being linked to possible financial compensation for damage caused by pandemic measures. However, it is the financial security and freedom of every Swiss citizen that is threatened by this Covid 19 law.

The brilliant American economist Catherine Austin Fitts, who accompanied Mr. Kennedy and our organization, Children’s Health Defense Europe, presented two essential elements: on the one hand, the pandemic is mainly a monetary event organized by central banks and private investment funds which allows the financial crisis to be attributed to a virus, while at the same time diverting taxpayers’ money to private funds.

On the other hand and above all, it is a question of taking absolute control over the life of the citizens by putting into service a permanent control tool centralizing all the data. The famous ‘health pass’ is in fact intended to become a ‘monetary’ pass, and will allow algorithms defined by a central authority to validate or prohibit in real-time any financial transaction according to a series of parameters linked to the health, the behavior or the opinions of each individual. The proof being that in Italy this ‘QR code’ certificate is directly issued by the Ministry of Finance and not by the Ministry of Health.

It seems therefore that the pact of silent coexistence and mutual benefit that allowed great freedom and democratic participation to citizens, in exchange for the grant of confidentiality and impunity to international organizations (ex. GAVI, WHO etc.), is about to be broken.

Not only would Switzerland not escape the control agenda deployed in the ‘Great Reset’, it would perhaps become its capital and one of its first victims.

While it had recently withdrawn from the general cooperation agreement with Europe, Switzerland now seems to be falling into the hands of the United States and the international organizations it hosts.

Thus, in contradiction with its traditional role as a neutral country, the country is currently a candidate for the UN Security Council, who has  the open intention of promoting the 2030 agenda (Davos). It is in this same spirit that Guy Parmelin, President of the Confederation, was in Washington from November 19 to 21, with a view to closer collaboration in the fields of business, education, research and innovation. He was there to meet with Eric Lander, White House Science and Technology Policy Director responsible for pandemic response policies, including vaccine development for future pandemics (after the coronavirus).

Already heavily criticized for the funding he received from Jeffrey Epstein, Lander, who chaired the Human Genome project for many years, is considered a central figure in the promotion of RNA technologies and ‘transhumanist‘ innovations.  Since his nomination to the White House, he has taken the head of a new agency ARPA-Health (or ‘Darpa health’) whose objective will be to integrate surveillance data and individual biological data with the data collected by the GAFA in a synthesis opening the way to a form of digital dictatorship monitored by artificial intelligence (e.g. the SAFE HOME program).

At the same time, we are witnessing, for examplein Switzerland the launch of the GESDA initiative, the Geneva Science and Diplomacy Anticipator whose objective is to form a global governance leadership through technology.

The fear that Switzerland will be catapulted into an Orwellian future is therefore very real. This is also evidenced by a strong warning from Archbishop Vigano, former Vatican ambassador to the United States, on the occasion of the famous referendum.

But if many Americans are looking to Switzerland, it is also because the constitutions of their federal states are similar and because there, citizens’ freedoms are sacred.

It is hoped that the appeals of international figures such as Robert F. Kennedy, Jr. and Catherine Austin Fitts, whose crowd-pleasing speeches have received hundreds of thousands of shares, and the remarkable work of Swiss whistleblowers and organizations, will succeed in altering the dark trajectory charted by the Davos elites.

As long as there is no fraud in the electoral process, a rejection of the Covid law is entirely possible.  For history teaches us that for centuries, in the souls of those who live in the mountains, freedom is not an empty word.

Putting an end to this dreadful agenda, a NO vote for the referendum on the 28th would send a strong signal to the world elite, and to its agents such as Fauci, Gates or Tedros, who might soon fall from their Pedestals.