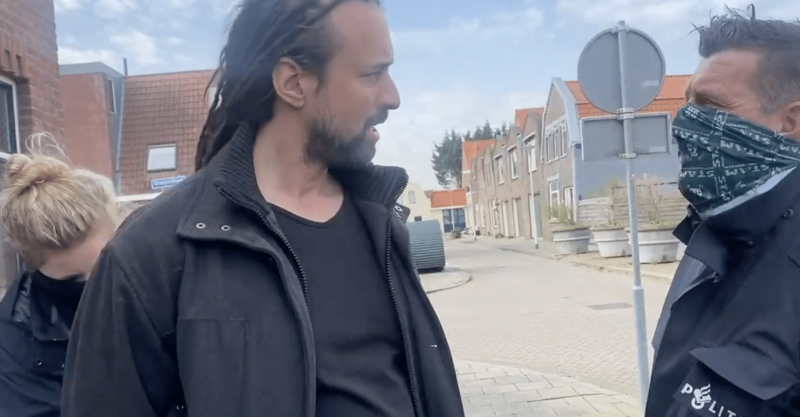 Willem Engel is a scientist and one of the most prominent critics against the disproportionality of the measures against the so-called Corona pandemic in the Netherlands. In addition to his Viruswaarheid site, which publishes information that critically examines and questions the narrative of the pandemic, Willem Engel has established a reputation as an activist on the streets as well as in the courtroom. In doing so, he may have caused some discomfort for Dutch Prime Minister Rutte, whose credibility is already severely tarnished.

On March 16, 2022, Willem Engel was suddenly arrested like a felon on the open street and handcuffed. What exactly he was accused of did not seem to be clear to the surprised Engel. His companion, who documented the event on video, asked irritably whether such a harsh crackdown on a law-abiding citizen was proportionate.

Willem Engel, together with his partner and lawyer Jeroen Poels, had recently documented the Dutch government’s close ties with the World Economic Forum in an extensive broadcast, also discussing aspects such as eugenics and treason. Head of government Rutte was probably not amused by this.

Then, a day before the arrest, posts suddenly appeared on Twitter accusing Willem Engel of spreading misinformation and calling him a “Putin supporter”.

As a result, the police are said to have received numerous complaints against Engel, prompting them to intervene. However, there is official confirmation of this only insofar as the officers spoke of charges against Engel during the arrest.

Today, after I became aware of what had happened, I wrote the following email to the Ambassador of the Netherlands in Berlin, Ronald van Roeden:

With some astonishment I have received the news that the Dutch citizen Willem Engel has been arrested under pretext and taken to Hoogvliet prison in Rotterdam.

According to unconfirmed reports, Mijnheer Engel is accused of inciting crimes against public institutions. In view of the extraordinarily peaceful and affectionate way of expressing himself over many years, these accusations seem more than doubtful. The suspicion arises that Willem Engel may have become inconvenient to authorities because of his persistent criticism of what were, in effect, unscientific and disproportionate measures to “contain” the “pandemic,” and therefore the imprisonment may have been an intimidation and a “warning shot.”

The Kingdom of the Netherlands is home to the International Court of Justice in the Hague. Deprivation of liberty without cause would be extraordinarily embarrassing for this very reason. Also, constructing a reason for arrest would be wholly inappropriate for a member state of the European Union, which is a signatory to the UN Charter on Human Rights.

All that Willem Engel has done in the past two years has been to uphold the right to life, liberty and security of all people under Article 3 of the UN Charter on Human Rights, Article 30 of which prohibits all members from abusing human rights to deny other rights to their citizens.

With the expression of my highest consideration

Those who wish to send encouragement and expressions of solidarity to Willem Engel can send them to this address: