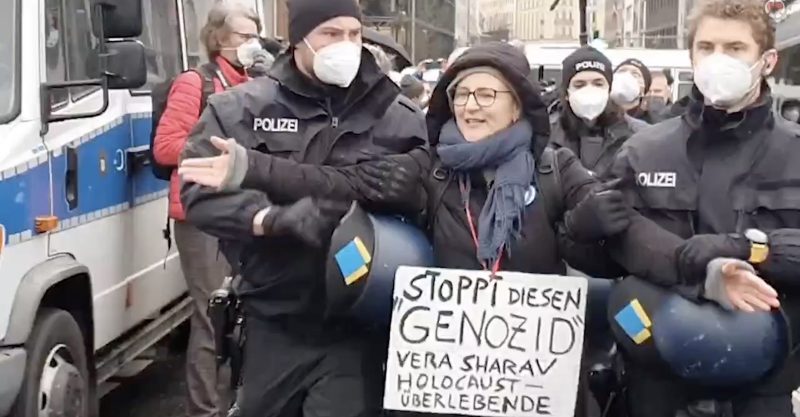 Monica Felgendreher is an artist and activist living in Berlin. On January 26th she went to join a protest at the German Bundestag where a debate was taking place to introduce mandatory vaccinations.
At the protest, Monica read out a speech which Holocaust Survivor Vera Sharav held in Brussels three days before.

In this exclusive interview Monica reports how she was accused of denigrating the Holocaust and taken away by the police. She is facing criminal investigations as downplaying the Holocaust is a criminal offense in Germany.

Mainstream Media has immediately tried to depict the incident as proof of Neonazi activities in Germany subverting the protest. Some journalists were said to have filed complaints to the Police about alleged downplaying of the Holocaust by Monica Felgendreher.

Whilst not all of the conversation is available on tape, several minutes of the agitated debate Ms Felgendreher had with Journalists were recorded (here and here). Some of that was published by the Jewish Forum for Democracy and against Antisemitism (JFDA) which also issued a strong condemnation of Ms Felgendreher who according to JDFA had committed the criminal offense of “relativizaton of the Holocaust.” The only proof given in the JFDA-declaration is the term “Genocide” which was written as a quote from Vera Sharav on the placard which Ms Felgendreher took with her to the protest.

All publicly available material documents how Ms Felgendreher in her discussions with Journalits prior to her arrest talks about similarities between Naziism in the early period of the “Thrid Reich” and current restrictions of fundamental human rights.

Monica Felgendreher has issued a three page statement in return to the JDFA-declaration, saying that:

»The conversation you cite with a journalist in front of the ARD Hauptstadtstudio on 26.01.2022 on the occasion of a rally against the introduction of general mandatory vaccination does not contain any elements that justify your claim. Apparently, you seem to have missed my rebuttal as well which was published on the same day on Youtube (2) and because of censorship appeared shortly thereafter on Odyssey (3).«

Felgendreher is however determined to take the JDFA up on its pledge to “consult the JDFA in her quest to connect to other witnesses of the Holocaust”. She goes on to extend an invitation to JDFA to attend an international Round Table discussion of the question “How can we learn from History” which Felgendreher together with other organizers is in the process of organizing.