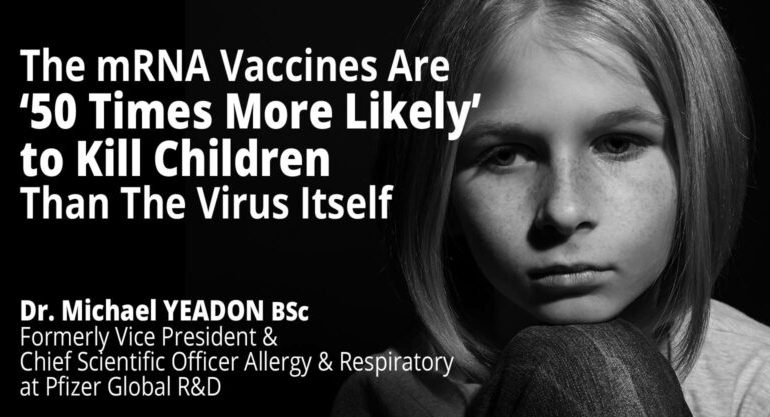 Right now the pressure to take the vaccine seems to be unbearable. In many countries most people are afraid to loose their job and reputation, and feel they could be excluded from socio-economic participation in society. It’s a harsh situation, but may not last forever, if we defend our rights.

To those who are considering ‘giving in’ : many parents with vaccine injured children lost all those things and their beloved son or daughter might be handicapped for life. So please remember to put your child’s health on top of everything else.  This is my experience as a mother and as a journalist:

Long before Covid, dozens of parents have told me this:

We took him to the emergency room at the hospital and were told that ‘this is normal’ and that ‘this means that the vaccine is working’.
After a few days the fever went down, but new symptoms appeared

Within a few weeks, ‘our child regressed’ and lost

At this point in the story, I would interrupt the parents and say, ‘I think I know what’s next.
You went to the pediatrician and he told you that it had nothing to do with the vaccine and that there was nothing to worry about. None of the prescribed treatments really worked. It took you several months to get an appointment with a specialist and to get a diagnosis. In the meantime your child continued to regress. Eventually, you were told it was autism or developmental disorder. You were told that he needs genetic testing,  (and/or psychotherapy). It is probably…

Invariably, I heard the parents answer me…
Yes, that’s exactly it, no one wanted to make the connection with the vaccine (MMR or DTP or multivalent etc.). We were assured that if the symptoms appeared at the time of the vaccination, it was a ‘temporal coincidence’, but that there could be no ‘causal link’. We were scorned, humiliated, and even threatened with the removal of our child from our custody for ‘abuse’ or ‘negligent’ when speaking about the vaccine. We kept quiet because we were afraid our child would be denied care and education.

I am writing to you now because I too have seen my child regress, loose eye contact, social interaction, lose his speech, be absent, scream every night, bang his head on the floor and seize. It is also because I am exceptionally lucky to have been able to help him return to a normal life, after years of treatment that cost tens of thousands of euros and hundreds of hours of our lives. Unfortunately, even with so much care and therapy of body and mind, most other children do not manage to regain their health and all their faculties. And it will be difficult for them to lead independent and fulfilling lives.

As for the courageous mothers who struggle every day to support them with love and care, most of them have lost their job, their money, their social life, sometimes there is no school or care center for the child, and in 80% of the cases their husband has left. In the end their own health is at stake.

In the USA, nearly 1 in 30 children has autism. During the tour of the film Vaxxed, more than 10,000 families came to meet the film team and tell their story. To this day over 120,000 testimonies have been collected.

This is the hidden reality of the good old classic vaccines, guaranteed ‘safe and effective’ for which side effects are ‘rare’…

Now in a only few months time, the Covid ‘vaccines’ who are using experimental technologies have already caused more deaths and injuries than all other vaccines combined for more than 20 years.  The blind decisions of the FDA, the CDC, ‘translated’ by the European Medicines Agency and our governments have resulted in the unnecessary death of many young adults and teenagers. In their case, the benefit-risk balance is automatically negative, because they do not die from Covid and do not transmit the disease.

We hear that ‘myocarditis is not that serious’. It’s a lifelong heart injury and many patients will die after 5 years.

A few weeks ago in Bousval, Belgium close to where I live, the baby of a mother who received a Covid vaccine suffered a thrombosis 3 days after birth, resulting in severe brain damage. The parents were assured that ‘this could not possibly be the vaccine, that it was safe and effective’ and doctors refused to report this tragic accident to our pharmacovigilance database.

This does not surprise me, but it still makes me feel like wanting to throw a bucket of water in the face of all the doctors who have abandoned the elementary principle of precaution and refuse to question themselves.

All this disaster, all these past and present victims are the consequence of people who refused to see the reality,  because of their career, their reputation, their ‘credibility’ and especially their unconscious guilt.

According to Dr. Mike Yeadon, former vice president and chief scientific officer at Pfizer Global R&D,  mRNA vaccines are 50 times more likely to kill children than the virus itself.

That’s all there is to say.