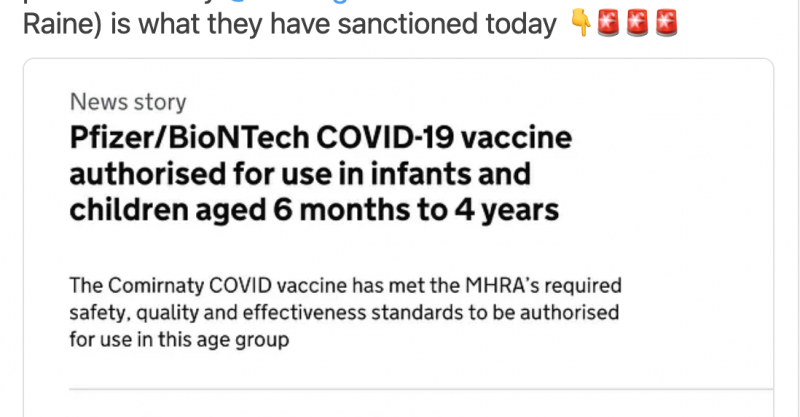 On March 5, 2022,  Dame June Raine, Chief Executive of the MHRA proudly spoke of the fact that ‘the MHRA had moved from the watchdog to the enabler’ at a presentation at Somerville College, Oxford.

Just when you thought it wasn’t possible for the pharmaceutically funded, Medicines and Healthcare products Regulatory Agency, to further expose themselves as Big Pharma’s lobbying/enabling arm- they never cease to disappoint.

On 6 December, the MHRA, the UK’s Medicines and Healthcare products Regulatory Agency issued the following statement on the UK government’s website: ‘Pfizer/BioNTech COVID-19 vaccine authorised for use in infants and children aged 6 months to 4 years.’ It went on to state: ‘The Comirnaty COVID vaccine has met the MHRA’s required safety, quality and effectiveness standards to be authorised for use in this age group.’

In utter disbelief I tweeted the following:

On the heels of my tweet, GB News invited me to debate with a Cambridge educated virologist who argued for the authorisation of the gene therapy product for infants as young as 6 months, albeit for those very sick.

I’m not sure how being injected (with three doses) of modified mRNA encased in billions of toxic lipid nanoparticles which hack into your body’s cells to produce yet further toxic vaccinal spike protein, would protect anyone?

For the past 2 years, I have researched and written numerous investigative reports for Trial Site News on the Pfizer-BioNTech vaccine clinical trials and many other Covid-19 related areas. The MHRA’s decision that the Comirnaty vaccine- the marketing name for the Pfizer-BioNTech Covid-19 vaccine, has met their required ‘safety, quality and effectiveness standards’ and has authorised its use in infants as young as 6 months old is a gross dereliction of duty by the agency, on so many levels.

Ironically, it informs the public just how low the MHRA standards have become that they have authorised these modified mRNA gene therapy injections to such a young-aged cohort of the population.

It’s worth noting that the pharmaceutical manufacturers themselves: Pfizer, BioNTech and Moderna have classified their ‘vaccines’ as gene-therapy products in their Security and Exchange Commission (SEC) filings to the US government.

For example, BioNTech’s SEC filings state: ‘Currently mRNA is considered a gene therapy product by the FDA. Unlike certain gene therapies that irreversibly alter cell DNA and many cause certain side effects, mRNA-based medicines are designed not to irreversibly change cell DNA.’

The fact that it’s not designed to irreversibly change cell DNA- does not leave one with a strong sense of reasurrance, now does it?

The claim that these mRNA-based injections do not alter cell DNA was reinforced by the armies of fact checkers funded by the likes of Google, Facebook and George Soros’ Open Society Foundations and of course, public health government websites. The possibility that these mRNA ‘vaccines’ could alter the human DNA was also promptly ‘debunked’ by the mainstream media. Then, along comes a scientific study conducted by researchers from Lund University in Sweden, published in February of this year in Current Issues in Molecular Biology which revealed how ‘BNT162b2 mRNA [Pfizer-BioNTech Covid-19 vaccine, Comirnaty] is reverse transcribed intracellularly into DNA as fast as 6 [hours] after BNT162b2 exposure.’

This was the first in vitro study on the effect of COVID-19 mRNA vaccine BNT162b2 on the human liver cell line. The researchers concluded: ‘We present evidence on fast entry of BNT162b2 into the cells and subsequent intracellular reverse transcription of BNT162b2 mRNA into DNA.’ This is alarming evidence that this type of gene therapy has the potential to affect a human cell’s DNA structure. More importantly, the safety implications of this are unknown!

My research published in Trial Site News on the court-ordered release of Pfizer’s trove of clinical and non-clinical trial documents (that the FDA and the MHRA relied on to grant emergency use authorization of the Pfizer-BioNTech vaccine back in December 2020) led to the discovery of a plethora of anomalies undermining the data integrity of Pfizer’s phase 1/2/3 pivotal clinical trial. My findings aligned with the testimony of Ventavia/Pfizer whistle-blower, Brook Jackson in my interview with her for Trial Site News. In the interview, Jackson claimed that Ventavia (Pfizer’s subcontractor) committed fraud put patient safety at risk and engaged in cover-ups of errors and malfeasance during its management of Pfizer’s clinical trials.

Furthermore, my investigations led to the discovery of concerning facts that neither BioNTech nor its manufacturing partner, Pfizer, conducted any carcinogenicity, genotoxicity, safety pharmacology or pharmacokinetic studies of their product. The excuse of WHO guidelines were used, which states ‘[these studies] are generally not considered necessary to support the development and licensure of vaccine products for infectious diseases (WHO,2005; WHO, 2014)’ However, on further investigation, according to WHO guidelines, ‘The need for specific studies should be considered on a case-by-case basis (e.g. when using novel adjuvants (a class of excipients) or alternative routes of administration).’

Two out of the four compounds of Pfizer-BioNTech’s lipid nanoparticle formulation are novel: ALC-0315 and ALC-0519, so these studies should have been conducted.

Alarmingly, mRNA ‘vaccine’ adverse event reports are at an unprecedented level across all online vaccine safety surveillance systems such as Yellow Card and VAERS with severe allergic reaction and myocarditis/pericarditis being of the most reported serious adverse events.

When it comes to effectiveness, there is unequivocal evidence of the waning efficacy of these products. I wrote a report, published in the Brownstone Institute, doubting Pfizer’s original claim of its product having 95% efficacy, using the data buried in the FDA’s Dec 10, 2020 briefing document. What’s even more striking is that Pfizer’s clinical trial was never designed to test whether its product prevented transmission. This crucial design flaw was remarked upon by Peter Doshi, senior editor at The BMJ.

Turning to the MHRA’s controversial decision to authorise the use of the Pfizer-BioNTech’s mRNA Covid-19 ‘vaccine’ in infants and children aged 6 months- 4 years- what renders it even more reprehensible is the fact it was based on ‘the MHRA’s experts carefully reviewed data from an ongoing clinical trial involving 4,526 participants.’

I spoke with Dr Clare Craig, diagnostic pathologist, on her thoughts about the MHRA’s December 6 decision, she responded:

“The MHRA are a sham regulator. Dame June Raine showed off about becoming an “enabler” of the pharmaceutical industry and the result has been approvals passed on mice data alone and now an approval for babies based on the shoddiest trial evidence I have ever seen. I could not understand why Pfizer were prepared to put such embarrassing data into the public domain. I heard that the FDA approached Pfizer for data on the babies and told them to just give them whatever they had. The decision to approve was clearly ahead of the data. Parents should be furious that their children’s safety is being disregarded in this way.”

The FDA authorised the use of both the Pfizer-BioNTech Covid-19 ‘vaccine’ this past summer, based on this trial involving 4,526 participants. I conducted an in-depth interview with Dr David Wiseman for Trial Site News, who has spoken at numerous FDA’s VRBAC (Vaccines and Related Biological Products Advisory Committee) meetings. Wiseman described in great detail the many red flags in regards to the trial’s ‘dodgy’ data and also revealed the many shocking Pfizer representative admissions at the crucial VRBAC meeting on June 14-15 2022.

The main takeaways from the interview:

However, two years on, given all we know about these mRNA-based injections with the litany of studies showcasing evidence that they are far from ‘safe and effective’ -yet, this fraudulent claim is still being clung to by the establishment. Only yesterday, PM Rishi Sunak evasively used it as his ‘response’ to MP Andrew Bridgen’s statement and question put before him in the House of Commons.

‘There have been more reported deaths and adverse reactions from mRNA vaccines in the past 18 months than there’s been for every conventional vaccine administered worldwide for the last 50 years..”

Above all, it’s important to not forget the fact that the MHRA is 100% funded by pharmaceutical companies- the very industry it’s supposed to regulate, so it goes without saying that it has become the epitome of the ‘enabler’- enabling these private companies to reap sky-rocketing profits at the expense of the public’s health and the future generations.’