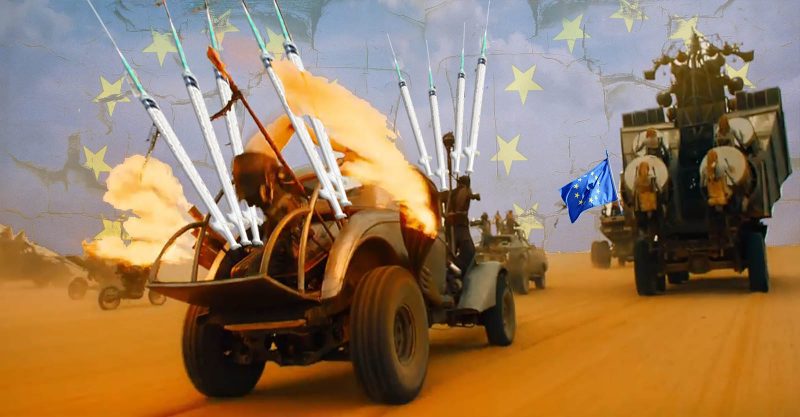 The European Union is currently accelerating different points on the Covid-19 vaccine agenda, harder, faster, stronger regardless of reality of the pandemic, of the use of new treatments, of serious safety risks or even the many extra billions it will cost.

Looking back right before the pandemic, in September 2019 the EU Commission and the WHO had mapped the road of a vaccine crusade during the ‘Global Vaccination Summit’ in Brussels, establishing the three pillars of the medical cult leading humanity towards universal vaccination   ‘In Vaccines we Trust’, ‘The magic of science’ and ‘Vaccines for everyone, everywhere’.  Looking at the agenda, it seems we are keeping course, but changing gear.

The Green Digital Certificate’s devils in the details

The Green Digital Certificate has been approved by the EU parliament on April 28th and is now entering the last phase of the legislative process, a ‘Trilogue’ in which the 3 main EU institutions the Council (representing the governments of the European Nations), the Commission (the ‘EU government’) and the Parliament come to a final agreement planned for the end of June.

A normal procedure takes a minimum of 18th months, but given the ‘emergency’ the plan is to reach an agreement for the next European Council on May 24th-25th.

The whole point of this marathon is to control citizen’s health status to travel and allegedly ‘reopen’ tourism and the economy before the summer holidays. Negociations are led by the Portuguese presidency who is eager to reach an agreement as fast as possible. But parties argue on several crucial points: the MEP’s want to reduce the overall reach of the text, for example to a limited period of twelve months (renewal would require another vote), ensure that the certificate would allow to lift the restrictions for the users, and that PCR-tests would be free or low priced.

Knowing that these tests are priced around 50 or up to 150 euros in certain countries and that a simple holiday in a neighbouring country might require 3 tests per person, it certainly deserves a little thinking when this is all supposed to ‘promote tourism and support the economy’.  In practice it also means that only the rich or the vaccinated would travel next summer.

Besides many organizations and advisory bodies object to the violation of privacy rules.  France’s CNIL insisted that the pass should not be used outside pandemic circumstances, and would only apply to specific events without the possibility for ‘other sectors’ to use it.  And in Belgium the Constitutional Court ruled in favor of Ligue for Human Rights who argued that permanent in-discriminated surveillance of the population is not compatible with democratic values. Even if countries like Switzerland, Spain and Ireland are testing new tracing aps such as the “crowdnotifier” system that would allow accurate tracking and timing in a decentralized and ‘anonymous’ way,  this means agreeing to constant discrimination and control of citizens according to their health status. And that is far from getting everyone’s approval, especially when it comes to vaccination.

It’s no secret that confidence in Covid-19 vaccines is very different from one country to another. France and French speaking Belgium are champions of hesitancy and their governments fail to convince the population to get the shot. Up to 38% might refuse the experimental injection in spite of mass propaganda to vaccinate, personal letters, emails, phone calls and sms.

Additionally groups of doctors are filing complaints to medical orders and health authorities. And finally there seems to be a total lack of agreement on what proof would be used to demonstrate immunity after recovering from the disease.

No wonder many members states wish to retain an autonomy and use the green pass ‘as they please’. Some would add their own restrictions but others on the contrary could ban all measures and choose to ignore EU’s new totalitarian tech toy.

But obviously guaranteeing independence of member states is not what the EU wants and the Portuguese Presidency has been mandated by the European Council to negotiate a full ‘regulation’ that would be binding for all European countries. What was originally presented as a simple tool for ‘harmonization’ to facilitate travel between countries, clearly seems to turn into a full-fledged instrument of health control at Union level.

This should not come as a surprise since the European Commission intends to take away this national health competence as it clearly announced in its plan for a ‘European Union of Health’. A new European agency called ‘HERA’ (Health Emergency Response Agency)  would decide on ‘harmonised’ measures, such as recommendations, vaccination, surveillance and ‘enforcement’ for all member states and avoid embarrassing alternatives such as the solo runs of Sweden and the Netherlands.

However parliaments and citizens in Europe are starting to question the benefits of emergency rules issued by the sacro-saint experts promoting experimental vaccines and constant tracking. This week the French parliament rejected the certificate in first reading before finally giving in, considering this is to be the center piece of the European reopening strategy.

The EU trilogue is struggling to come up with an agreement on the Green pass, but the Commission keeps moving forward and 18 countries are currently working hard to make the certificate compliant or ‘interoperable’ with all the national databases. Deutsche Telekom and SAP are in charge of operations and should have the tech infrastructure ready in 6 weeks by the time the final vote is taken. If negotiations for the regulation linger or even fail at the next European Council on May 24th and 25th, European leaders will probably take over and pass it as a recommendation of the Council. In practical terms this would mean no binding regulation from the European Union but a joint decision of member states’ governments to adopt the tool in a common approach.

An overview of the Covid-19 vaccine rollout in the EU shows that 210 million doses of Covid-19 injections have been distributed and 175 million used in the European Union. An average of 54% of the European population has received at least one dose. Meanwhile the Commission is already preparing a new set of blind faith proposals in its never-ending mass vaccination creed or ‘strategy’.  The Commissioner for Health Stella Kyriakides said she would introduce a proposal to speed up the release of new vaccines authorization by introducing ‘Emergency Use Approval’ procedures similar to those of the USA. or the U.K.

The European Medicines Agency (EMA) is normally not allowed to issue emergency authorizations, but in exceptional circumstances it has already recommended ‘compassional use’ of medicines. This procedure was used in April 2020 with Gilead’s antiviral drug Remdesivir, which was granted a conditional marketing authorization to enable a ‘joint procurement’ which brought at least 220 million euros in the company’s wallet before the EU finally being abandoned the drug due to its lack of efficacy.

Why stop such good (pharma) practice? Vaccine manufacturers are putting the pressure on the Commission as this move would grant them blanket immunity from vaccine damages, something that most Europeans would clearly disagree with. In normal circumstances consumers are still allowed to take the manufacturer to the courts, before the states refund possible compensation after litigation. But in the previous Covid-19 vaccines contracts vaccine producers managed to secretly negociate abusive exemption clauses. Several MEP’s and a good part of the public opinion strongly criticized the Commission for it and an analysis conducted by an independent legal team estimated that such extensive liability exemption clauses were not valid, calling for a revisal of the negotiated terms.

There is no doubt that this Emergency Use Approval is a central element in the present round of negociations for the next vaccine purchase and delivery orders. Once this is accepted putting new vaccines on the market, for new variants every 6 months or so would be a mere formality. Again a fast tracking vote of the proposal is to be expected as Mrs. Kyriakides is vowing to do everything it takes to accelerate vaccinations. However before following her in this new race some clarity should be made on the superior reasons for her blind faith in the vaccine agenda. Questions regarding a sum of 4 millions euros that landed on her bank account during the first round of vaccine purchase negotiations require serious answers and in depth investigations.

Teens in Summer, children in Autumn

In the meantime Pfizer has received approval to vaccinate teenagers in the USA and has launched a similar procedure in Europe. Children are next. The German minister of health Jens Spahn announced that they were aiming to inoculate most teenagers by the end of the summer (music concerts will be the incentive), while vaccinations for the younger children might start in September. France confirms this agenda in its vaccination calendar.

While the experts acknowledge that children have a very limited risk of suffering from Covid-19, while they know that these gene therapy products are causing blood clotting, thrombosis and death, while they admit they don’t have any idea if the vaccines will have any impact on the new variants of the next season, and while they all perfectly know that these products are experimental, they nevertheless put vaccination of young children on the schedule.

We must ask why?