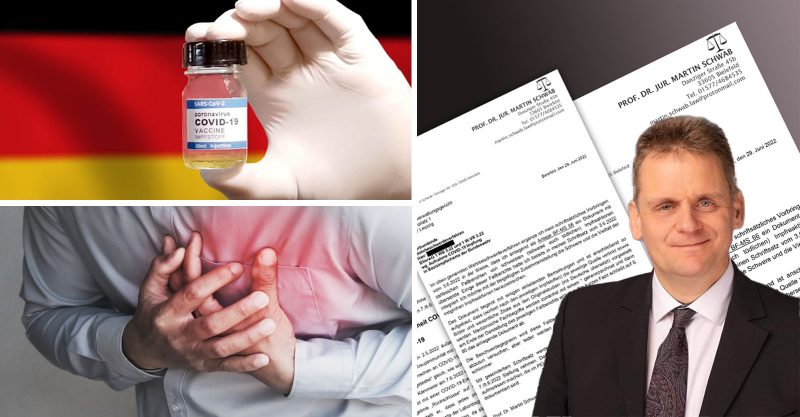 The lawsuit filed by two Bundeswehr officers against the inclusion of the so-called Covid vaccination in the basic vaccination scheme of the Bundeswehr (which would automatically be equivalent to compulsory vaccination for every member of the Bundeswehr) has now taken a positive turn. After the hearing senate of the Federal Administrative Court in Leipzig had already criticised a too thin data basis since the first day of the trial on 2 May 2022, the legal representative of the complainant, our party member Prof. Dr. Martin Schwab, was now able to provide the court with an extensive basis of data. This not only includes a sad and sobering account of victims of mass vaccination, but also makes direct reference to the statements of a witness for the defense.

Dr. Dirk Mentzer of the Paul-Ehrlich-Institut (PEI) had testified on 07.06.2022, the second of five trial days scheduled so far, that the cases of myocarditis (inflammation of the heart muscle) repeatedly mentioned in connection with undesirable side effects of the Covid vaccination, in fact healed without consequences after one to five days. Whether he made this statement with or against his better knowledge cannot be judged at this point, but the complainant succeeded in clearly refuting this trivialisation with her statement of 01.07.2022.

In a brief of several pages, she cites countless cases in which this very myocarditis took a fatal or permanently disabling course, as well as other serious side effects of vaccination. She also rejects Mentzer’s trivialising blanket statements and proves, on the basis of generally accessible medical data (i.e. also accessible to Mentzer), that certain forms of myocarditis, such as “fulminant lymphocytic myocarditis”, which is reported with above-average frequency as a vaccination side effect, have a lethality of up to 40% in the first four weeks after occurrence.

It remains to be seen whether the defendant will also make an attempt to substantiate its position that the vaccination is harmless with actual data. Then, however, the question arises as to how it intends to do this at all. Already on the last day of the trial, on 8 June 2022, the court had criticised a clear under-reporting of vaccination side effects. So it could well be that the cover-up tactics used by the Federal Government, above all by the Federal Health Minister Lauterbach, in matters of vaccination side effects could now have a detrimental effect on the trial – at least for the defendant.

Since the beginning of the so-called Corona pandemic, and especially with regard to the mass vaccination with the experimental mRNA vaccine, the Federal Government has pursued the goal of not collecting data in the first place that could have an unfavourable effect on it. It was also recently severely reprimanded in this approach by the Evaluation Commission of the Bundestag.

If the court continues to refuse to participate in this incomprehensible and irresponsible ostrich policy, in which what is not is not allowed to be (and everything looks like that at the moment), then the verdict can actually only be in the complainant’s favour. It remains exciting.

The two pleadings submitted by Prof. Dr. Martin Schwab on 29.06.2022 and 01.07.2022 are available online. However, delicate minds and people with a weak stomach are advised not to view it.