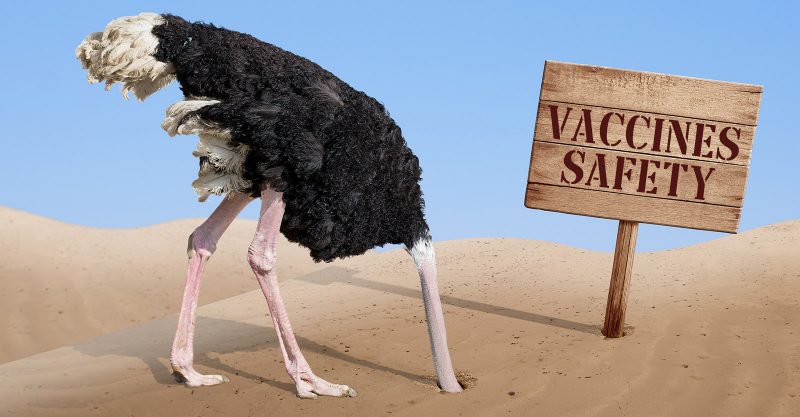 Some readers may recall back in August following the pronouncements of British Prime Minister, Boris Johnson, about clamping down on vaccine misinformation. I tried to help by reviewing our National Health Service webpage ‘Vaccines are safe and important’. It may be said the web-managers were perfectly courteous but referred my comments to “Public Health England Immunology Team” who took no less than 106 days to reply. I was expecting something really good, considered expert replies to all my criticisms. What actually arrived was nothing but links to other web-pages committing similar solecisms and evasions. Reproducing the letter could apparently open me to draconian penalties but fundamentally the taunt about the “echo-chambers of social media” turns out to be nothing but projection: all they can do when challenged is repeat the propaganda. MISINFORMATION IS INFORMATION THE GOVERNMENT DOES NOT LIKE

I am responding to claims or statements in this web-document ‘ Why vaccination is safe and important’ [1] (not following the original order of presentation).

I begin with the statement:

It is not clear what the evidential basis is for this statement. Formerly, at least, British health officials were keen to cite a paper by Offit et al (2002) which suggested absurdly an infant could withstand 10,000 vaccines at a time. However far-fetched, this was based on a theoretical claim about routine exposure to environmental antigens. Evidently some environmental exposures are more dangerous than others, otherwise people would not be at risk from infectious diseases at all, but the basis of exposure through vaccination is different (injected), and involves adjuvants so it is perhaps not relevant at all to talk about the number of antigens (as in Offit). In August 2004 Dr Salisbury distinguished in an e-letter to me between the increased risk of adverse reactions in an extended schedule and “overload”, which begs the question what is meant by “overload” and what people are supposed to understand by such a statement. A paper by Aaby et al (2012) was entitled “Vaccine programmes must consider their effect on general resistance”, which is evidently a warning that there is no such blank cheque for expanding the schedule. I covered this ground in my published submission to the House of Commons Health and Social Care Committee inquiry into anti-microbial resistance last year [2]. The NHS need to clarify what they mean, but also state what the evidential basis is for this claim.

Another statement apparently contradicts the proposition that there is anything inherently safe about vaccinating:

This touches on the reality that vaccines are industrial products which might cause harm. Recently, the issue of how well or thoroughly vaccines are tested for safety before marketing has come under scrutiny. People are told (for example in GCSE biology) that the gold standard for the scientific testing of products is a double blind placebo trial but a lesser standard seems to routinely obtain with vaccines. A letter from a US charity Informed Consent Action Network to the US Department of Human Health Services noted that not only were there no vaccines on the US schedule which had been safety tested against placebo but also none which had been tested against earlier products which had been safety tested against placebo [3]. A correspondence in on-line British Medical Journal which involved Heidi Larson of the Vaccine Confidence Project, Paul Offit and Stanley Plotkin failed to establish the existence of thorough safety testing before marketing on the UK schedule, or the existence of any double-blind placebo safety trials – even when challenged by two leading medical scientists, Christopher Exley and David Healy [4-6]. The NHS needs to be clearer on what level of safety testing has actually taken place. The statement that vaccines “get safety tested for years before being introduced” while disarmingly vague does not offer real reassurance.

The statement “they’re also monitored for any side-effects” is also problematic and potentially misleading. In the first place the MHRA (the United Kingdom licensing agency) does not actively monitor side-effects at all but does receive yellow card reports: this is only a passive reporting system. Historically speaking the MHRA is not known to act on these reports and this came under particular scrutiny last year in the British Medical Journal over the swine flu episode of 2009 when the MHRA failed to pick up signals regarding GSK’s vaccine Pandemrix and narcolepsy which had been identified in two Scandinavian countries [7-12]. In order to detect long-term harm the MHRA would also have to follow up on yellow card reports with patients after a time gap which is not their policy. As reported by the House of Commons Health Committee in 2005 the MHRA is hopelessly conflicted [13].

“(vaccines) do not cause allergies or any other conditions…”

is not compatible even with the information in package inserts. The NHS is obliged to make clear the risks of medical interventions to the patient or their representatives under the Montgomery ruling of 2015 which would include drawing their attention to complications in vaccine package inserts [14]. Such a blanket statement is incompatible with this ruling, nor should it be up to health officials to decide what people should be told or not told.

is vague and not conditional on anything. It may not be safer with some people with some products in some conditions, and therefore is either not true or has no meaning.

“(vaccines) do not contain mercury (thiomersal)”

“None of the influenza vaccines contain thiomersal as an added preservative”

which implies the presence thiomersal in the preparation of at least some products at continuing reduced levels.  And further down we read:

“Vaccines sometimes contain other ingredients that make the vaccine safe and more effective…There is no evidence that any of these ingredients cause harm when used in such small amounts.”

Just taking the example of aluminium there is in fact by now a large mainstream scientific literature either questioning the safety of aluminium adjuvants or indeed asserting their danger. The present statement puts the NHS in an invidious position [16-24]. Either the authors are unaware of this developing concern or have dismissed it out of hand, but it is not correct or accurate to tell the public that there is no evidence. Furthermore, comparison with ingested aluminium on the link is inappropriate and misleading since even if it was good to eat or drink aluminium (the examples used) adjuvanted vaccines are injected and bypass the digestive system. It is also palpably contradictory to claim that a substance which is present in sufficient quantities to be an active ingredient could not also pose a risk.

Again, this is a loosely couched statement:

On the one hand the apparent elision of vaccines as a class with MMR is misleading, while the fact that some studies may not have found something is insufficient grounds for saying it does not happen. When, last year, I queried the evidence base for general MMR safety the CMO cited only the review by Taylor (2014) which was restricted to the issue of autism, MMR and thimerosal – there were just six MMR studies, the first of which was published a full fourteen years after MMR was first introduced the British schedule (when the issue was already highly contentious) and which perhaps only closed the door after the horse had bolted. It does not answer the ethical problem of what evidence health officials had that the products were safe at the time of introduction. Indeed we know that the most favoured MMR product in 1988, SKB’s Pluserix, was already withdrawn in Canada at the time [25, 26].

While our health officials have succeeded in not finding a connection between the vaccine programme they promote and autism they also have no explanation for the rise of autism from 0.2% for those born 1984-8 and the 3.3% rate recorded in Northern Ireland schools earlier this year [27,28]: they have neither predicted it, nor can they explain it while every day the reports of chaos pile up [29]. The United States government in its Vaccine Injury Compensation Program, however, have acknowledged the connection between vaccines and autism on a number of occasions.

“The government has never compensated, nor has it ever been ordered to compensate, any case based on a determination that autism was actually caused by vaccines. We have compensated cases in which children exhibited an encephalopathy, or general brain disease. Encephalopathy may be accompanied by a medical progression of an array of symptoms including autistic behavior, autism, or seizures.”

“Now, we all know that vaccines can occasionally cause fevers in kids. So if a child was immunized, got a fever, had other complications from the vaccines. And if you’re predisposed with the mitochondrial disorder, it can certainly set off some damage. Some of the symptoms can be symptoms that have characteristics of autism…”

An investigation into US vaccine injury court in 2011 found 83 cases of compensated vaccine injury in which autism is mentioned, but which because they are sealed cannot be used as precedents [33]. In an unsealed ruling relating to autism it is stated [34]:

“The Court found, supra, that Bailey’s ADEM was both caused-in-fact and proximately caused by his vaccination. It is well-understood that the vaccination at issue can cause ADEM, and the Court found, based upon a full reading and hearing of the pertinent facts in this case, that it did actually cause the ADEM. Furthermore, Bailey’s ADEM was severe enough to cause lasting, residual damage, and retarded his developmental progress, which fits under the generalized heading of Pervasive Developmental Delay, or PDD. The Court found that Bailey would not have suffered this delay but for the administration of the MMR vaccine, and that this chain of causation was not too remote, but was rather a proximate sequence of cause and effect leading inexorably from vaccination to Pervasive Developmental Delay.”

“If 95% of children receive the MMR vaccine, it’s possible to get rid of measles.”

is likely false, because of the waning effectiveness of the vaccine [35-45].

CONCLUSION This is not intended to be a comprehensive review of claims made on the web-page. The point should made that though the page disparages less favourable discussion of the programme found elsewhere on the web it is itself full of loose statements and weak documentation. Reading it an educated public might not be wholly to blame if they were not completely convinced.

[1]  ‘Why vaccination is safe and important’ (media reviewed 30 July 2019), https://www.nhs.uk/conditions/vaccinations/why-vaccination-is-safe-and-important/

[13] “The industry is by no means solely to blame for the difficulties we describe. The regulators and prescribers are also open to criticism. The regulator, the Medicines and Healthcare products Regulatory Agency (MHRA), has failed to adequately scrutinise licensing dataand its post-marketing surveillance is inadequate. The MHRA Chairman stated that trust was integral to effective regulation, but trust, while convenient, may mean that the regulatory process is not strict enough. The organisation has been too close to the industry, a closeness underpinned by common policy objectives, agreed processes, frequent contact, consultation and interchange of staff. We are concerned that a rather lax regime is exacerbated by the MHRA’s need to compete with other European regulators for licence application business.’  House of Commons Health Commttee, ‘The Influence of the Pharmaceutical Indiustry”, 2005, https://publications.parliament.uk/pa/cm200405/cmselect/cmhealth/42/42.pdf