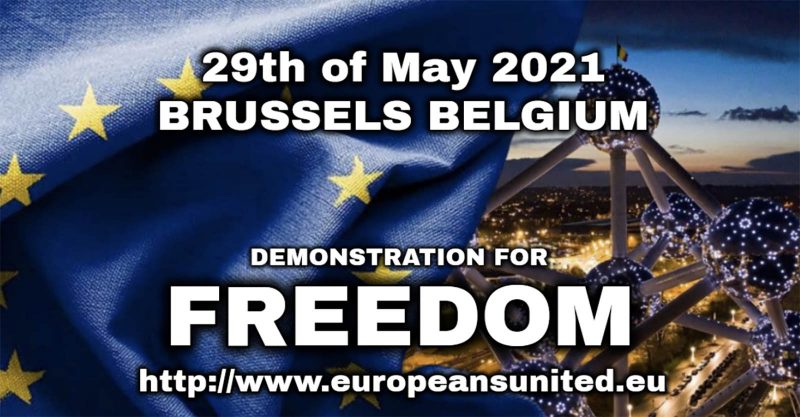 On May 29, more than 50,000 participants from all European countries will unite in Brussels for a new European Demonstration for Freedom and democracy. The peaceful march organised by EuropeansUnited.eu will start at 3pm in a large forest south of Brussels: Bois de la Cambre / Ter Kamerenbos.

On the day, EuropeansUnited group will hand over their petition with more than 60,000 signatures to the European Parliament, asking for Freedom of movement – No Digital Green Certificate, the Reinstate constitutional laws, the Freedom of demonstration without police violence, the Freedom of press and impartial coverage.

With this event, EuropeansUnited.eu is protesting against the undemocratic way in which measures against the spread of the COVID-19 virus have been introduced in several European countries. In addition to the fact that in many countries the measures were introduced without parliamentary involvement, many of the measures currently in force are simply unconstitutional or go against the Declaration of Human Rights.

As stated in their press release, “the organisation was created by people from different backgrounds (entrepreneurs, health professionals, civil servants, students, etc.) who came together to start a social debate. The starting point is that even emergency measures should be introduced in a democratic way”.

You can read the full version and sign the petition here.