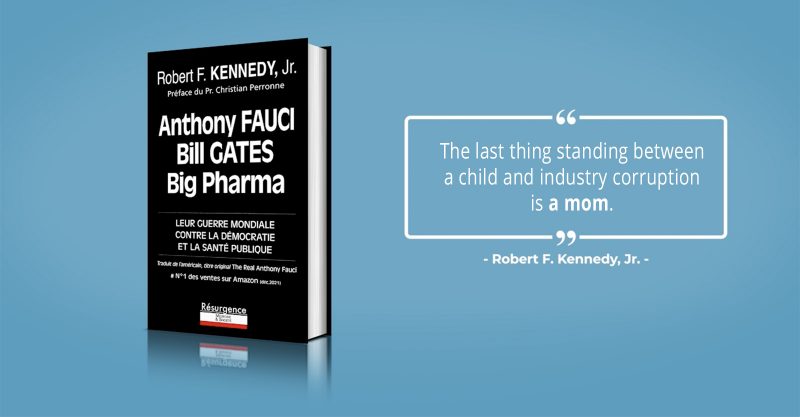 Hi, this is Robert F. Kennedy, Jr. With a message for all of our brothers and sisters in France. Here to announce to you the publication in French language of my book The Real Anthony Fauci, Bill Gates, Big Pharma and the global war on public health and democracy. I wrote this book so people can understand what’s happened to our world, this global coup d’état against democracy that’s occurred in all the liberal democracies throughout the globe over the past 20 months. Instead of a public health response to a public health crisis, we got a militarized and monetized response that benefits the mercantile ambitions of pharmaceutical companies and the power ambitions of technocracies, of the intelligence agencies and the Military Industrial Complex. And I tell the story about how we got here… Tony Fauci has been, is the longest serving public health official in American history. He has been in the NIH for over 50 years. He is the primary architect of agency capture, of the transfer of those agencies from public health concerns to simply promoting the financial and power ambitions of pharmaceutical companies and working side by side with military and intelligence agencies to do that. It’s important for the rest of the world to understand how we got here, and I try to do that in this book. I wanna tell the people of France that this is a globalist project and enterprise to end democracy, to erode constitutional rights around the globe to create a permanent technocracy that will govern us for the benefit of large corporations rather than the human spirit and the human soul and human dignity and public health.

The attack is coming from globalists and the response must be across the globe. I know, we’ve been following in France the rebellious spirit, the giant demonstrations and protests in the streets. We pray for you, we support you, and we want you to know that, as you do these things, as you mount your resistance, you may feel alone much of the time but you have friends in every corner of the globe. So, welcome to the movement. I hope this book becomes a tool and a weapon for the people of France and their fight for freedom. France has always been a template, an example for the rest of the world. We are counting on you. We are looking to you for leadership. And we look for you, we will see you on the barricades.