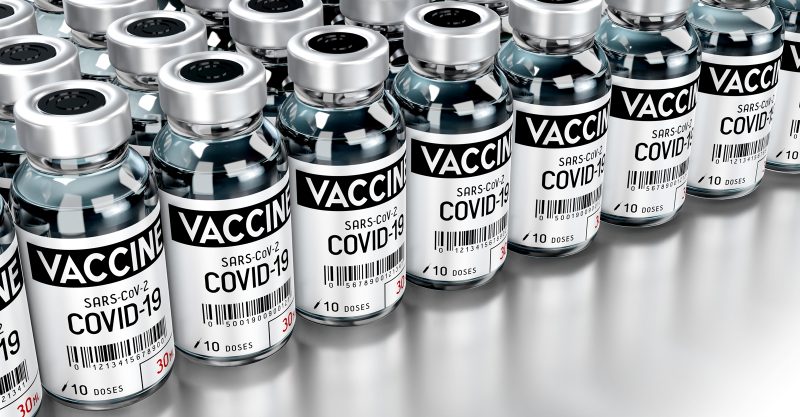 The number of reported adverse events following COVID vaccines continues to climb, according to data released today by the Centers for Disease Control and Prevention (CDC). The data comes directly from reports submitted to the Vaccine Adverse Event Reporting System (VAERS).

VAERS is the primary government-funded system for reporting adverse vaccine reactions in the U.S. Reports submitted to VAERS require further investigation before a causal relationship can be confirmed.

Every Friday, VAERS makes public all vaccine injury reports received as of a specified date, usually about a week prior to the release date. Today’s data show that between Dec. 14, 2020 and May 21, a total of 227,521 total adverse events were reported to VAERS, including 4,406 deaths — an increase of 205 over the previous week — and 21,537 serious injuries, up 3,009 since last week. 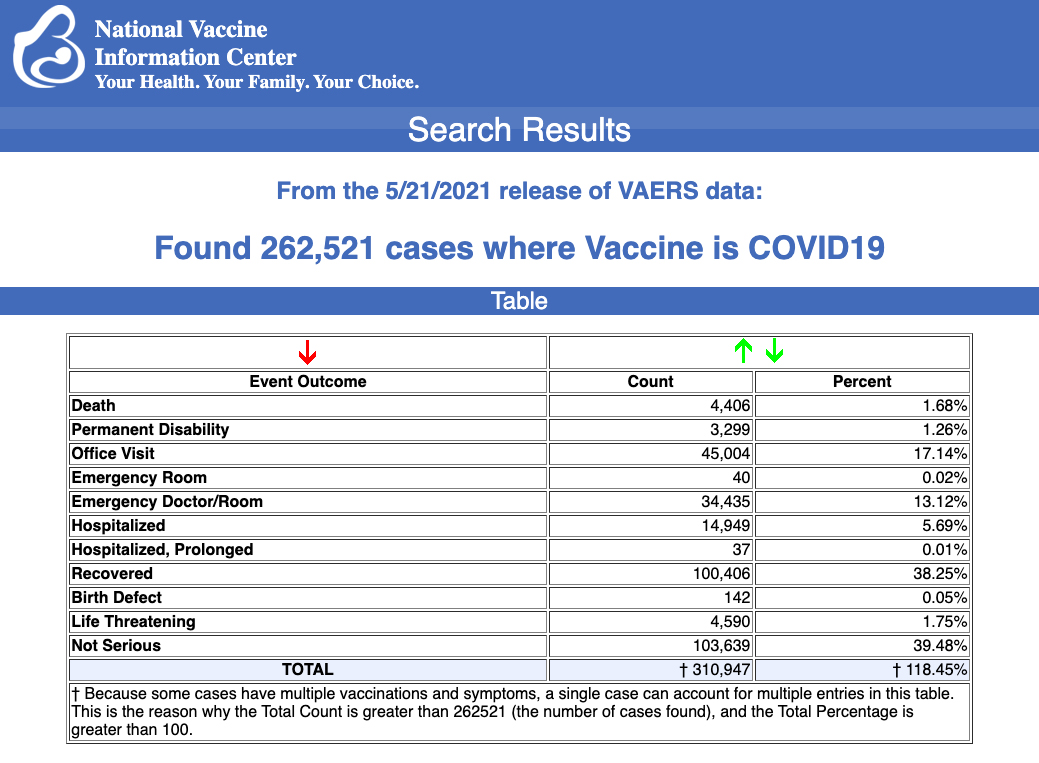 On May 24, The Defender reported the CDC is investigating reports of teens and young adults vaccinated against COVID who experienced heart problems. The CDC’s Advisory Committee on Immunization Practices released an advisory May 17 alerting doctors to reports of myocarditis, which seemed to occur predominantly in adolescents and young adults, more often in males than females, more often following the second dose and typically within four days after vaccination with Pfizer or Moderna vaccines. Most cases appeared to be “mild” and follow-up is ongoing.

The CDC said its monitoring systems had not found more cases of myocarditis than would be expected in the population, but members of the committee on vaccinations said healthcare providers should be made aware of the reports of the “potential adverse event.”

As The Defender reported May 26, one week after the CDC announced it was investigating heart inflammation in recently vaccinated young adults, Connecticut reported 18 new cases of heart problems among teens who had received a COVID vaccine. All 18 cases resulted in hospitalization — the vast majority for a couple of days, while one individual remained hospitalized as of May 26.

White House press secretary Jen Psaki said during a press briefing Monday the Biden administration will continue to advise young people to get vaccinated, despite reported cases of myocarditis.

A search in VAERS revealed 419 cases of pericarditis and myocarditis, among all age, groups reported in the U.S following COVID vaccination between Dec.14, 2020 and May 21. Of the 288 cases reported, 247 cases were attributed to Pfizer, 151 cases to Moderna and 20 cases to J&J’s COVID vaccine.

On May 25, Moderna announced its vaccine was found to be safe and 100% effective at protecting against COVID in a phase 3 trial of more than 3,700 participants between the ages of 12 and 17, Axios reported. No significant safety concerns were identified and side effects were generally consistent with those seen in an earlier trial of adults, the company said.

Moderna plans to seek expanded Emergency Use Authorization of its COVID vaccine for teens from the U.S. Food and Drug Administration next month. If approved, it would be the second vaccine available to young teens.

Number of kids hospitalized for COVID inflated by at least 40%

On May 26, The Defender reported that two papers published in the journal of Hospital Pediatrics found pediatric hospitalizations for COVID were overcounted by at least 40%, carrying potential implications for nationwide figures used to justify vaccinating children.

One study by researchers at the Stanford University School of Medicine found that counting SARS-CoV-2 infections in hospitalized children overestimated the impact of COVID in pediatric populations because the numbers included many asymptomatic patients.

Out  of 117 hospital admissions, the authors concluded 53 patients (45%) were admitted for reasons unrelated to the virus. The study also found 39.3% (or 46 patients) coded as SARS-CoV-2 were actually asymptomatic.

In the second study, out of 146 records listing patients as positive for SARS-CoV-2 from May 1, 2020, to Sept. 30, 2020, the authors classified 58 patients (40%) as having “incidental” diagnosis — meaning there was no documentation of COVID symptoms prior to hospitalization.

The same study categorized 68 patients, or 47%, as “potentially symptomatic,” which was defined as when “COVID-19 was not the primary reason for admission for these patients, and COVID-19 alone did not directly require hospitalization without the concomitant condition.”

“Our goal is to make sure we have accurate data on how sick children are getting,” said Dr. Alan Schroeder, a clinical professor of pediatric critical care and of pediatric hospital medicine. “If we rely on hospitals’ positive SARS-CoV-2 test results, we are inflating by about twofold the actual risk of hospitalization from the disease in kids.”

The federal Occupational Safety and Health Administration (OSHA) quickly reversed its position on requiring companies that mandate COVID vaccines to treat adverse reactions as “recordable injuries,” announcing that it will no longer enforce its previous ruling.

OSHA said it made the change in order to avoid “the appearance of discouraging workers” from getting the COVID vaccine and also because it did not wish to “disincentivize employers’ vaccination efforts.”

The Defender reached out to OSHA and asked why the agency abruptly changed its policy, who pressured OSHA to change its position and why adverse reactions caused by COVID vaccines that an employee may be required to receive as a condition of employment and would fall under 29 CFR 1904.7 would not be recorded as a work-related injury.

OSHA responded by referring us to the Centers for Disease Control and Prevention to read more about coronavirus, local and regional OSHA facilities, and the U.S. Department of Labor’s website. An OSHA spokesperson declined to provide any additional information.

On May 27, The Defender reported that Belgium announced it was suspending vaccinations with J&J’s vaccine, for people under the age of 41, following the death of a woman from blood clots after she received the shot.

The EMA is reviewing the woman’s death along with other reports of blood clots, with the Belgian and Slovenian medicines agencies, and has asked J&J to carry out a series of additional studies to help assess a possible link between the shot and rare blood clots.

On May 27, The Defender reported on the first cases of large-vessel arterial occlusion strokes in young adults linked to AstraZeneca’s vaccine, which were described in detail for the first time in a letter published online in the Journal of Neurology Neurosurgery & Psychiatry.

The three cases, one of which was fatal, occurred in two women and one man in their 30s or 40s who developed characteristics of VITT, a reaction associated with the AstraZeneca vaccine.

“These are the first detailed reports of arterial stroke believed to be caused by VITT after the AstraZeneca COVID vaccine, although stroke has been mentioned previously in the VITT data,” senior author, Dr. David Werring, professor of clinical neurology at the Stroke Research Centre, University College London Queen Square Institute of Neurology, told Medscape Medical News.

Deaths due to blood clots from AstraZeneca vaccine increase

On May 27, The Defender reported that an Ontario man in his 40s died after receiving his first dose of the AstraZeneca vaccine. Dr. Barbara Yaffe, Ontario’s associate chief medical officer of health, said his death is being investigated, but the man suffered from vaccine-induced immune thrombotic thrombocytopenia. Chief Medical Officer Dr. David Williams restricted AstraZenecavaccinations for people who have not yet received the first dose as of May 11, due to a higher-than-expected rate of blood clots.

In Greece, a 63-year-old woman died of blood clots after vaccination with AstraZeneca. The case was one of four being investigated by the National Organization for Medicines for a potential correlation between AstraZeneca’s vaccine and rare blood clots.

On May 27, The Guardian reported that award-winning BBC radio presenter Lisa Shaw died after suffering blood clots following AstraZeneca vaccination, according to her family. The 44-year-old developed severe headaches a week after having the jab and fell seriously ill a few days later, relatives said in a statement. Shaw died at the Royal Victoria infirmary May 21 after being treated in intensive care for blood clots and bleeding.

The UK Medicines and Healthcare products Regulatory Agency said the benefits of the vaccine continue to outweigh the risks for most people. It has not proved the vaccine causes the clots, but has said the link is getting firmer.

As The Defender reported May 25, the European Medicines Agency is investigating the death of british fashion model Stephanie Dubois, who died from a blood clot days after receiving her first dose of AstraZeneca’s COVID vaccine. Dubois, 39, had no underlying health conditions according to health officials at the hospital in Nicosia, where she was hospitalized May 14, after experiencing breathing issues. The fashion model suffered a brain hemorrhage and was in a coma before she passed away May 21.

Two-time Olympic archer Haziq Kamaruddin, died at the age of 27 on May 14, after collapsing at his home days after receiving Pfizer’s COVID vaccine. Kamaruddin died of a blocked coronary artery, the Health Ministry said Saturday, adding there was no evidence of a link to the vaccine.

There are multiple reasons a coronary artery can become blocked, including by a blood clot, according to Yale Medicine.

As The Defender reported last month, all three vaccines authorized in the U.S., including Pfizer, can potentially cause blood clots.

According to the CDC website, “the CDC follows up on any report of death to request additional information and learn more about what occurred and to determine whether the death was a result of the vaccine or unrelated.”

On March 8, The Defender contacted the CDC with a written list of questions about reported deaths and injuries related to COVID vaccines. On May 19, a CDC employee said our questions had been reviewed and our inquiry was pending in their system, but would not provide us with a copy of the response.

It has been 81 days since we sent our first email inquiring into VAERS data and reports.

Children’s Health Defense asks anyone who has experienced an adverse reaction, to any vaccine, to file a report following these three steps.