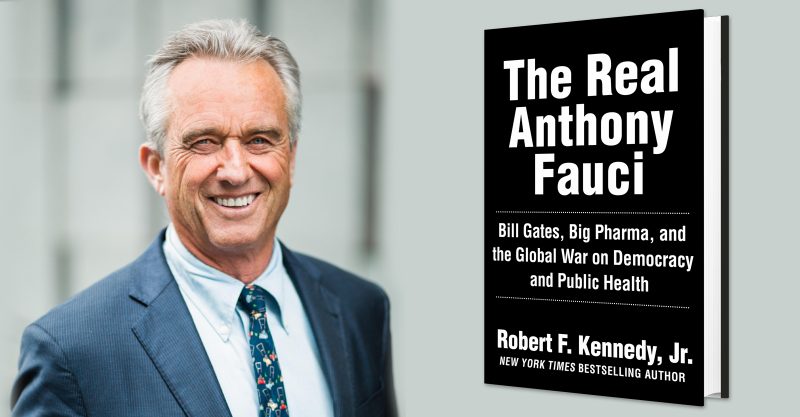 This book provides the hard facts about the epidemic and research – making it accessible to as many people as possible.

In my latest book — “The Real Anthony Fauci: Bill Gates, Big Pharma, and the Global War on Democracy and Public Health” — I take an in-depth look at the disastrous consequences of Dr. Anthony Fauci’s 50-year reign as America’s public health czar. The book, which will be released Nov. 16, is available now for pre-order.

The research I conducted for my new book exposes how Fauci’s gargantuan yearly disbursements allow him to dictate the subject, content and outcome of scientific health research across the globe.

These annual disbursements also allow Fauci to exercise dictatorial control over the army of “knowledge-and-innovation” leaders who populate the “independent” federal panels that approve and mandate drugs and vaccines — including the committees that allowed the Emergency Use Authorization of COVID-19 vaccines.

Fauci uses the financial clout at his disposal to wield extraordinary influence over hospitals, universities, journals and thousands of influential doctors and scientists — whose careers and institutions he has the power to ruin, advance or reward.

These are the same doctors who appear on network news shows, publish on the op-ed pages of influential media, and craft and defend the pharmaceutical cartel’s official narratives.

Fauci only rarely performs NIAID’s traditional mission of researching the causes behind the exploding epidemics of allergic and autoimmune diseases — as evidenced by the fact that under his watch, the chronic diseases Congress charged NIAID with preventing  rose from 1.8 % among children when Fauci came to NIAID in the 1960s, to 54% today, when obesity is factored in.

Instead of addressing the rise in chronic diseases, Fauci transformed NIAID from a world-class regulator into a product incubator for Big Pharma by developing new drugs and vaccines for which he, his agency and his employees often share patents and royalties.

For example, Fauci and four of his hand-selected deputies will partake with Moderna in millions of dollars in royalties from sales of Moderna’s COVID vaccine — which was co-developed by Moderna and NIAID.

Fauci has made himself the leading proponent of “agency capture” — the subversion of democracy and public health by the pharmaceutical industry.

As “The Real Anthony Fauci” reveals, Fauci has steadily failed upward. His legacy is a nation that uses increasingly more pharmaceuticals, pays nearly three times more for prescription drugs than people in dozens of other countries, and has worse health outcomes and a sicker population than other wealthy nations.

Today, prescription drugs — many developed by the National Institutes of Health (NIH) during Fauci’s tenure at the NIH’s NIAID — are America’s third leading cause of death.

My book also reveals how Fauci and his cohorts in Pharma profit handsomely from sickness — but not so much from good health.

50 years as the ‘J. Edgar Hoover of public health’

Fauci has survived half a century in his government post — he’s the J. Edgar Hoover of public health — by kowtowing to (and profiting from) pharmaceutical interests.

He launched his career during the early AIDS crisis by partnering with pharmaceutical companies to sabotage safe and effective off-patent therapeutic treatments for AIDS.

Fauci orchestrated fraudulent studies, and then pressured U.S. Food and Drug Administration (FDA) regulators into approving a deadly chemotherapy treatment he knew to be worthless against AIDS.

The FDA deemed AZT too toxic for human use. Many researchers today argue AZT killed far more people than AIDS.

Thanks to Fauci’s corrupt intervention, AZT, at $10,000 per patient per year, became history’s most expensive commercial drug — one that made billions for GlaxoSmithKline.

Fauci repeatedly violated federal laws to allow his Pharma partners to use impoverished and dark-skinned children as lab rats in deadly experiments with toxic AIDS and cancer chemotherapies.

In 2005, Congress cited his agency for consistently breaking federal laws in outlaw experiments on Black and Hispanic orphans in foster homes in New York and six other states.

Fauci’s long list of unethical and genocidal experiments on Africans caused mayhem and tragedy across the continent, particularly for children and pregnant mothers.

Each of the vaccines funded by Fauci and Bill Gates — polio, DPT, malaria, meningitis, tetanus and HIV — likely caused far more injuries and deaths around the world than they averted.

In early 2000, Fauci shook hands with Gates in the library of Gates’ $147 million Seattle mansion, cementing a partnership that would aim to control an increasingly profitable $60 billion global vaccine enterprise with unlimited growth potential.

In 2009, Gates stood before the United Nations and declared the “Decade of Vaccines.” He committed $10 billion to build a regulatory, political, media and brick-and-mortar infrastructure with the goal of inoculating the entire global population with multiple jabs by 2020.

In my book, I lay bare how Fauci, Gates and their collaborators:

The “Real Anthony Fauci” details how Fauci, Gates and their cohorts used their control of media outlets, scientific journals, key government and quasi-governmental agencies, and influential scientists and physicians to flood the public with fearful propaganda about COVID-19 virulence and pathogenesis, and to muzzle debate and ruthlessly censor dissent.

Gates and Fauci engaged in almost daily communications throughout the lockdown, and coordinated virtually every decision about COVID-19 countermeasures with each other.

They effectively placed global populations under house arrest, and flooded the mainstream and social media with propaganda crafted to terrorize.

To justify the implementation of draconian measures, Gates and Fauci systematically stoked irrational fears and stifled common sense to induce a form of mass psychosis known as “Stockholm Syndrome.”

They inspired in their hostages gratitude towards their captors, and the belief that total obedience and unquestioning submission to an experimental, shoddily tested, fast-tracked, zero-liability COVID vaccine was their only hope for safe escape from captivity and “return to normal.”

As the pandemic unfolded, Gates and Fauci:

Predictably, during the COVID crisis, Fauci’s policies resulted in the U.S. accounting for 20% of the world’s COVID deaths, despite making up only 4.2% of the global population — another example of Fauci failing upward.

As my book makes clear: Fauci’s COVID policies also spawned new insidious authoritarianism — and propelled America down a slippery slope toward a grim future as a dark totalitarian security and surveillance state.