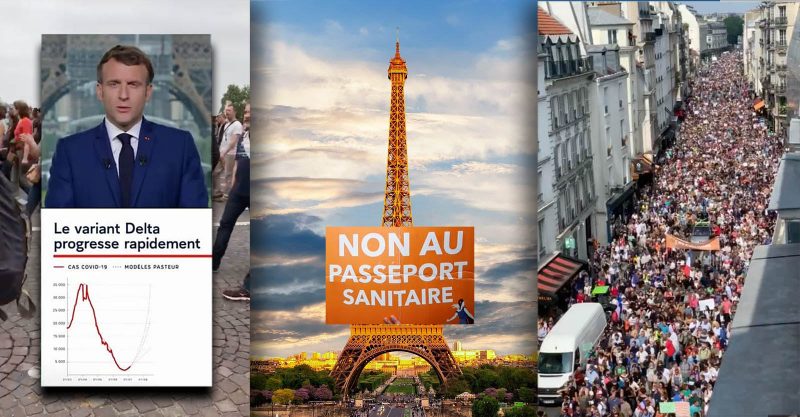 As France was celebrating Bastille Day on July 14th, despite mainstream media reports of a “few hundred people” in the streets following President Macron’s speech on Monday evening, it was clear from people actually in the streets that several thousand French people were demonstrating.

In multiple cities across France, including Bordeaux, Lyon, Marseille, Nantes and of course, Paris, protestors were expressing their disgust and disagreement with President Macron’s announcements of Monday, July 12. Macron announced that all healthcare workers and people in contact with the sick and weak must be “fully vaccinated by September 15 or else they’ll be prohibited from working”. Many categories of people are affected by this, including fireman and ambulance drivers. However, the police force is excluded and thus not subjected to the obligation to receive the injection, which the protestors claim is experimental and potentially dangerous.

Macron also announced that the “pass sanitaire“, the “health pass” that went into force on July 1st for entrance to events of 1000 people or more, will now be required, starting July 21, to enter places of “leisure and cultural activities of 50 people or more”. Starting in “early August”, the pass will be required to enter basic places of daily life, including bars, cafés, restaurants, shopping centers, hospitals, nursing homes or to use certain types of transportation including airplanes, trains, intercity trains and long-distance coaches.

The health pass people will be required to show is the QR code that is found in the contact tracing app, TousAntiCovid (EveryoneAgainstCovid) or, or for those without a smartphone, printed on a document attesting to the fact that the person has either received the required number of doses of an EMA-approved Covid-19 vaccine 2 or 4 weeks prior, provided a negative test dated less than 48 hours, or a positive RT-PCR test proving the person has “recovered” from a Covid-19 infection in the recent months.

The demonstrators are irate that this latest turn of the screw amounts essentially to forced vaccination for the entire French population, while Macron et Co. brush off the claim, stating that it will still be possible to provide test results. However, Macron also announced that the cost of the various tests, “comfort tests” as he referred to them, which are a way of avoiding the jab, would no longer be covered by the national Social Security system, the basic health care service in France, starting in September. Given the new measures, people will likely need to submit to getting tested multiple times a week and paying out of pocket for it. With the pass being required in all sorts of everyday places, people’s “vaccine credentials” could potentially be verified several times a day.

Having initially claimed such measures or obligations would never apply to daily life, Macron’s clear about face has deeply angered the French.

These new measures also sparked outrage because they apply to children age 12 and up. Monday evening, it was clear that this new plot twist threw a major monkey wrench into the summer vacation plans of many families. On Tuesday, the government backpedalled and said the health pass would apply to children starting August 30th. He also stated that starting in September, children would be vaccinated in schools.

The protestors were also disgusted by Macron’s unilateral, dictatorial style, essentially announcing that his draft legislation will pass and swiftly become law. The text is expected to be voted in the coming days. Merchants, restaurant, bar and café owners are concerned about this new requirement for them and say they have no desire to start policing their customers, especially after just recently being allowed to reopen and start serving them again, after almost a year of forced closure. They fear that customers will simply choose to stay home if getting jabbed or swabbed is required to enjoy an evening out on the town or an espresso on a terrace.

From a legal perspective, the simple fact that those categories of people would be required to check people’s ID’s and information about their health status violates many laws on the books and infringes a person’s right to privacy and doctor-patient privilege. For the moment, mandatory vaccination applies only to the healthcare workers and related sectors. However, the measure infringes on a person’s right to bodily integrity. Lawyers are currently studying the situation and building their strategy to attack what they consider unconstitutional measures in direct conflict with basic human rights.

During Monday’s televised speech, Macron made other disconcerting announcements, resurrecting the reforms for the French retirement and unemployment benefits systems that had sparked the now-famous “Yellow Vests” movement in 2018. For the moment, mandatory vaccination and health pass controversy are taking center stage.

Wednesday’s demonstrations were followed by a large peaceful and apolitical demonstration on Saturday 17 July in Paris. Many doctors, lawyers and other associations created to defend the rights of the French people and to fight against the draconian “emergency” restrictions imposed on citizens, joined the movement to unite against what they consider tyranny, a health dictatorship and the destruction of a normal way of life.

Before the protestors could take to the streets, Macron’s speech spurred nearly 1 million people to jump online – while he was speaking – to make an appointment to get the shot. The medical-appointment-making website was saturated.

Given the slippery judicial slope these “health measures” are on, and the motions and other actions that lawyers are currently preparing to halt them, regardless of whether or not the measures are revoked or annulled, those million people will have been jabbed and Macron will have contributed to making that happen. Vive la France.