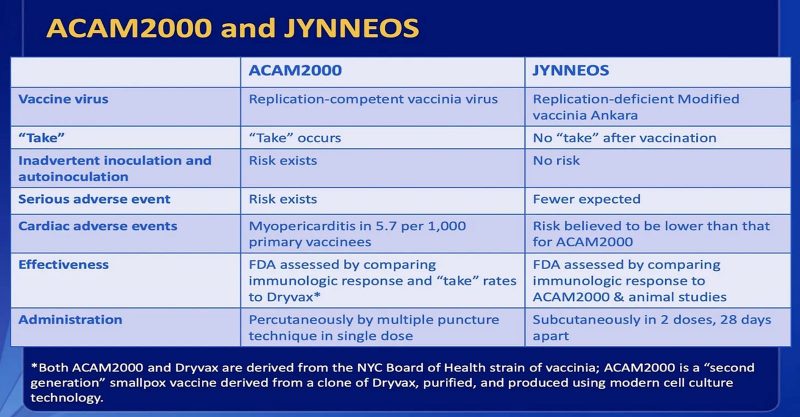 The program quickly fizzled due to the info getting out it caused heart attacks and myocarditis. 1 in 175 recipients gets myocarditis.

Both FDA and CDC tell you it is a very dangerous vaccine. 1 in 175 recipients getting heart damage is more than ten times more often than it occurs after COVID vaccines—in the highest risk group—and this is after the single dose in those who have not received it previously. Below is a slide from CDC’s June 24 briefing to its ACIP advisory committee on the two monkeypox vaccines.

Now read about how the campaign to vaccinate at least 10 million Americans (against the backdrop of invading Iraq) resulted in only 38,000 taking the shot. That was less than 1% the amount of vaccinations the USG was aiming for.

Americans understood then that if they got injured or died, they were on their own—no benefits existed, there was no ability to sue—just like today—and they were smart enough, 19 years ago, to say no.

What is the difference? Today, the media have covered up the injuries and don’t allow Americans to learn they have no access to benefits if injured of killed by these vaccines.

The Bush administration’s campaign to vaccinate health workers against smallpox has proved so unpopular that state health departments across the nation have destroyed an estimated 61,000 doses of expired vaccine — substantially more than what has actually been administered.

In New England’s six states alone, public health agencies expect by mid-September to have incinerated more than 1,000 doses, as immunization drives that once aimed to vaccinate thousands of doctors, nurses, and paramedics instead settle for a few hundred. The vaccine expires after 90 days.

Meanwhile, New Jersey authorities announced they are ending their vaccination initiative, disappointed by the reception it received among health professionals. In fact, while authorities once spoke optimistically of inoculating as many as 500,000 medical personnel nationally, the latest federal figures show that only 38,297 vaccinations have been given since January.

“The war came, the war left, things happened, and we weren’t using vaccine as quickly as we had hoped to use it,” said Dr. Alfred DeMaria, the Massachusetts director of communicable disease control. “And that’s when we got to the 90-day expiration, and we had to throw it away.”

In Maine, the state’s public health chief recalls one immunization clinic where a vial was opened containing enough vaccine for 100 people. Only five showed up, so the rest of the vaccine was destroyed.

The US Centers for Disease Control and Prevention reports that it shipped 291,400 doses of smallpox vaccine to states, with vials carrying freeze-dried vaccine that is mixed before injection with a liquid largely constituted of glycerin. That liquid mixture must be injected within 90 days.

Last week, authorities at the CDC said they had no figures on the cost of a single dose of vaccine or even for the entire smallpox vaccination campaign, in part because stockpiles of vaccine were purchased years ago, making price estimates almost impossible.

But Dr. Anthony Robbins, a public health specialist at the Tufts University School of Medicine who oversaw all national vaccine programs during the Clinton administration, estimated that “it cost nickels” to buy a dose of the smallpox vaccine, which had been in storage for at least two decades. The vastly larger cost, Robbins said, is the infrastructure needed to deliver the vaccine.

For example, the Massachusetts Department of Public Health received about $1 million to run its smallpox campaign, although that did not include the cost of vaccine, which was given directly by the federal government to the state.

Dr. Raymond Strikas, who coordinated the CDC smallpox initiative, said last week that the agency gave state public health directors as much flexibility as possible in when and where they would immunize health workers, which meant that sometimes vials were tapped to inoculate relatively few medical personnel.

“We wished to assure that states had maximum opportunity to get as many people vaccinated as possible. They were able to offer vaccine in a wide variety of ways,” Strikas said. “It is not surprising that some vaccine did not get used . . . We accept that as the cost of doing business.”

The recent destruction of about 61,000 doses has no impact on the nation’s ability to vaccinate Americans in the event of an emergency, CDC authorities said. The director of the National Institute of Allergy and Infectious Diseases testified before a Senate panel earlier this year that the nation had 15 million doses in reserve, and that testing showed the available vaccine would retain its potency even if it was diluted to create as many as 75 million doses.

While vaccine prepared for injection faces an ironclad 90-day deadline for use, expiration dates are also assigned to unopened vials of freeze-dried vaccine as soon as they are transferred out of their long-term storage freezers. In fact, 3.2 million doses — some of which sits in state health departments — were scheduled to expire on either Aug. 31 or Sept. 30.

But after testing samples and determining they remain potent, the US Food and Drug Administration granted three-month extensions for the unmixed vaccine, a process that has become a routine form of quality assurance.

“I am not at all concerned about this expiration date on the unopened vaccine,” said Dr. Bill Schaffner, chairman of the department of preventive medicine at Vanderbilt University School of Medicine. “It is a wonderfully stable product.”

Smallpox was officially eradicated in 1977, with the last naturally occurring case reported in Somalia. But the attacks of Sept. 11 as well as the arrival of anthrax-laden letters fueled fears that rogue agents might attempt to use smallpox as a tool of terrorism.

The smallpox inoculation campaign was hampered from its inception, first by concerns among health-care workers over who would pay their medical bills if they fell ill from the vaccine and whether they would continue getting paid while recovering. The vaccine is generally safe, but compared to immunizations widely given today, it does have higher risks, with previous experience showing one to two recipients per 1 million die as a result of receiving it.

Those health concerns loomed larger still earlier this year when specialists monitoring the response to the vaccine discovered a worrisome incidence of heart complications in inoculated health workers.

Those forces conspired to stall immunization efforts across the nation, with New England health-care workers especially resistant to rolling up their sleeves. In Massachusetts, public health authorities had hoped to vaccinate 10,000 health workers. But by last week, only 133 had been immunized, while about 180 doses of vaccine had been destroyed.

Across New England, authorities had prepared to immunize about 23,000 health workers but instead have given only 1,360 vaccinations so far.

To dispose of the vaccine, authorities typically use high-temperature steam to kill off the active ingredient, which is made from a viral cousin of smallpox known as vaccinia. In Connecticut, that purified liquid and its container are crushed and then incinerated.

“We don’t just take it and throw it in the trash can,” said Dr. James Hadler, director of Connecticut’s infectious disease surveillance program. “We dispose of it as medical waste.”

Kenneth James, an international health specialist at the Boston University School of Public Health, said the vaccination effort was impaired by poor communication between authorities planning the program and the people designated to receive the vaccine.

Further, James said, when President Bush declared the conflict in Iraq over, a sense of urgency that had once propelled the vaccination campaign evaporated.