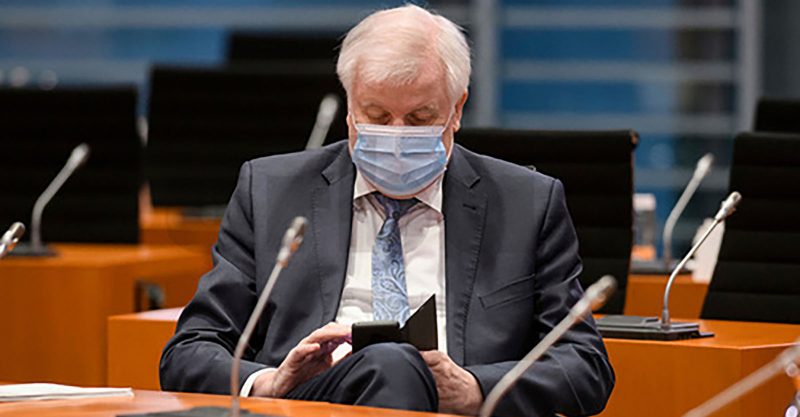 Covid-19: are the media victims of governmental disinformation?

This is a case that is shaking the German political class. An investigation by the German newspaper Die Welt reveals how the Minister of the Interior used alarmist messages and public figures in his communication on Covid19, in order to instil fear and legitimate hard corona measures.

” What’s happening across the Rhine? The German newspaper Die Welt, one of the three main newspapers in the country, revealed in its edition last Sunday how the German Minister of the Interior worked, as early as March 2020, on scenarios aiming to artificially increase the fear of the virus among the population. Berlin wanted to create support for drastic measures in this way. This “state lie”, on the front page of the German press for several days and repeated in the European press, has so far received very little coverage in France, except by France Soir.

At the start of the pandemic, Interior Minister Horst Seehofer (CSU) wanted to make his population understand the dangers of the coronavirus. Its strategy: to expect the worst to prepare the population to follow strict measures, reports the Belgian news agency Business AM. Following a preparatory meeting of the Minister with two scientists, his Secretary of State Markus Keber then sent a series of emails to scientists and universities, asking them to draw up a plan that would introduce “measures to preventive and repressive character “.

The “worst scenarios” to support “preventive and repressive measures”?

These designated universities and scientists have cooperated to draw the “worst scenarios”. In four days, the main outlines were formulated, feeding into a report which was first classified as ‘confidential’ before being shared with the press.

After several months of litigation with the Robert Koch Institute, the government agency responsible for the coordination during the ‘Covid19 pandemic’, Die Welt was finally able to get the 200 e-mail exchanges. The techniques detailed in the report reveal the creativity of its authors. Playing with death rates, using images of people dying of suffocation… The political goal of these messages? To instil and maintain fear and docility within the population. “The strong sense of helplessness needs to be contained. This can be done by spreading the impression of strong state intervention,” one of the emails explains. It was therefore necessary to present the “least favorable” figures.

While the Robert Koch Institute said that 0.56% of those infected would die, an employee of the Leibniz Institute for Economic Research (RWI), however, suggested doubling that figure. The two percentages were finally retained in the final report, published in April 2020. “If the government does not act, 70% of the population could be infected. The death toll could rise to millions”, has consistently repeated Minister Seehofer in March and April, according to Business AM.

How to instrumentalize the media?

Die Welt investigation caused a scandal in Germany, while in Belgium, at the same time, a documentary created controversy. “This is not a conspiracy” by journalist Bernard Crutzen, decrypts how the media talk about Covid. This documentary, very instructive in many ways, contains a bewildering sequence: a presentation on the management of pandemics, given in January 2019 by the Belgian virologist expert Marc van Ranst at the Royal Institute of International Affairs, also called Chatham House, one of the most influential British think-tanks. Dr Marc van Ranst is not just anyone: member of the group of experts in charge of the Exit Strategy, a committee created in April 2020 which advises the Belgian government, he was notably chairman of the scientific committee of the Commissariat Influenza which in 2009 recommended the GSK vaccine, while he was receiving remuneration from GSK.

What does Dr van Ranst say in this live video from 2019? His recipes for manipulating the media: “To get the attention of the media, you make a deal with them,” he explains. “You will tell them everything, and if they call you, you will pick up your phone. By doing this you can take advantage of the early days to achieve maximum coverage, they are not going to look for alternative voices. If you do this, it will be much easier. ”

How to inspire fear? “You have to say ‘Ok, we’re going to have H1N1-related deaths, obviously it’s inevitable,’ he explains. I used that in the media: 7 flu deaths a day at peak of the epidemic would be realistic … “That’s true for every year, it’s a very conservative estimate. But talking about death is very important because people start to think “Wow, you mean people die of the flu?” And it was a necessary step. ”

Is the video uplifting? It illustrates the capacity of the media to be blinded and instrumentalized by experts and emotional arguments, and to be used for purposes far from the public interest, honest information and open debates.

How to exit the circle of Policy-Influencing Strategies?

These strategies of influence to serve the governments, I know them well. Since the Chernobyl cloud in 1986 and the denial of the reality of radioactive contamination in France by the highest level of power, I have never ceased to fight state lies. This time, the surveys in Germany and Belgium show us that it is no longer a question of being reassuring or denying the risk. The goal is to instil and maintain fear.

The management of Covid-19 by the authorities conceals gray areas, small arrangements with the numbers. Several books, in particular those by Professor Christian Peronne and anthropologist Jean-Dominique Michel, list the shortcomings and inconsistencies of the decisions that have been taken, especially in France. The academic Laurent Mucchielli regularly documents on his blog the conflicts of interest surrounding the treatments supported – or prohibited – by the French government.

Beyond the tragedies caused by the deaths of patients taken in too late or of our elders left in isolation, confined within four walls and far from their loved ones, it now appears that the media also have both the victims and the targets of this pandemic of fear. A politically desired fear, orchestrated and whispered to the ears of the media which then became its accomplice relays. Was this desire to scare aimed at making us accept authoritarian measures, confinement, obedience, impotence, as the current German scandal teaches us? Many groups of lawyers, in particular the League of Human Rights in France, denounce the liberticidal measures taken in the name of the health emergency.

One year after the start of the pandemic, journalistic inquiries provide us with tangible and objective elements of measures taken on false arguments, on the basis of intentional “fake news”. Are these exceptional measures, still in force across Europe, justified? Are they disproportionate? Do we need to revise our principles for managing the Covid-19 pandemic?

It is by coming out of state lies, naively peddled and repeated day after day, by the media and continuous news channels that we will be able to detoxify ourselves from this unanimous but abusive fear. Getting back to our senses, getting out of paralyzing fear and the strategy of emotion are now democratic imperatives if we are to be able to make rational and reasonable decisions. The fairest decisions. ”