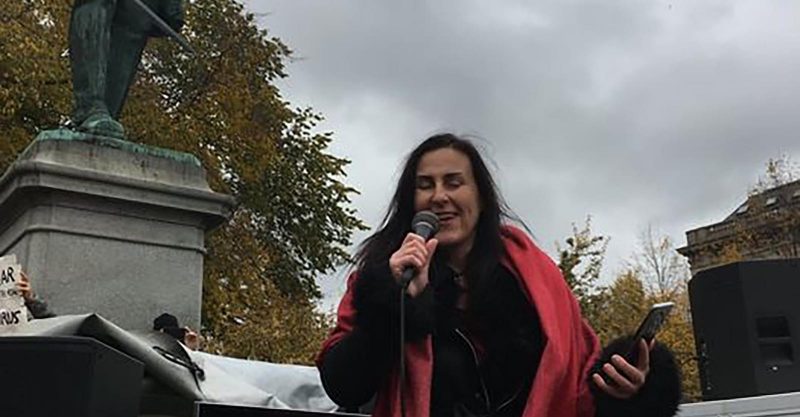 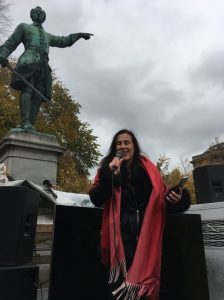 One might wonder why the Swedish would have a freedom rally, being the only ones in Europe still outside the ‘lockdown prison’. Well, the first reason is that Stockholm was chosen as a symbol of resistance by the freedom fighters in Europe meeting there to found a ‘World Freedom Alliance’. And clearly it was also the easiest place to meet.

Arriving from Brussels I had taken a bus and then the underground experiencing a  surrealistic feeling… I had spotted only one person wearing a mask in the tube.  Everything seemed like it was ‘before’.  It felt very strange as if I had accidentally been transported on another timeline or perhaps as in the science fiction movies where the hero finally makes it to ‘the free zone’ after a terrible chase. When I crashed in my room, I was almost in a state of shock.

How did we get in this mess?  This is the year 2020 and I just took a plane to meet people wanting to discuss strategies to fight for… the right to move and breathe freely…

I took me a few hours to relax and let go the ‘shit they’re gonna shoot me’ reflex every time I moved without a ‘face covering’. I couldn’t but think of hypnotic fear the people in my country were plunged in. In Belgium, masks were mandatory almost everywhere and  a household was allowed to have only one contact person per month in their ‘bubble’.   Teenagers were constantly reminded that they would be responsible of their grandparents’ death. And in France children had to wear a mask from age 6 sometimes for more than  8 hours a day.  In some schools, they received 3 tokens per day during which they could breathe freely for a few minutes. A child explained how he really tried to spare at least one token to be able to breathe in the afternoon as otherwise ‘he wouldn’t make’ it until the end of the day.

How much longer can this insanity go on? And why was Sweden not under this bad spell?  How did they managed to resist this? Was it due to the personality of their chief epidemiologist who had resisted lockdown and mask obligations against the strongest pressure? Or was it that the Swedish would never accept this?  That they love freedom, and do not have such a fear of death? After all, they are the descendants of the brave and fearless vikings.

In this time of the year, the first days of November, we usually celebrate all saints and honour the past generations. What would our ancestors think of us? All over the world entire generations have fought to gain freedoms against oppression and defend their human rights. They wanted a life of dignity for their community and their families. They were ready to ‘die with their boots on to protect their children’, just like the Kennedy’s.

Yes that was really the reason why I was here.  To be with other people who were not afraid.  We played the message that Robert F. Kennedy, Jr. had recorded to support freedom fighters all over the world during the protest. I could feel how the crowd felt inspired by these simple and strong words, by the example of a man with great courage and willingness to serve humanity.  I felt happy to represent him in Europe and to share his message. Perhaps I could not picture myself with cowboy boots on, but as I mother I could definitely say that ‘nobody would touch my kid’.  And I could hear all the mothers join.

It felt so good to meet with other brave people and start a ‘World Freedom Alliance’.  This was a real moment of celebration!

Senta Depuydt’s words to the supporters of the rally in Stockholm:

‘I will die with my boots on’

You have heard the words of a Kennedy. These words have meaning.

They are words of men with great courage. Men with true hearts, man who want to serve life.  They should inspire us to be brave men and brave woman too.

But what will we do with it?

Imagine how our ancestors would feel if we would tell them that we gave all these freedoms and rights up because we are scared of getting ill?

What would we answer? That we are afraid to die? Well, I have scoop… this is the ONLY thing we can be sure of: WE ARE MORTALS.  Dying at an old age is a normal part of the life cycle. The question is not how and when we will die.  The question is how and when we want to live. We have the choice to lead a full and free life at every instant. Until the last moment.

The body and souls of our children are a sacred temple. And governments have not rights to abuse them.  Or to take them as hostage.

Our children need to breathe freely. This VITAL for their physical mental and social development!

What society sacrifices the health, education and future of the younger generation to prolong the lives of those who are nearing death? This is complete non sense. This goes against nature.

As a mother I can tell you this: my children are sacred. Whatever scientists, doctors or governments may say. We are the ones giving new life.

As parents we have a duty to protect our children and grandchildren and to pass on our values.

Our freedoms and our fundamental natural rights as human beings should be the guiding principles of their future.

This cannot perish. This our the legacy of our ancestors and the treasure that we hold in our hands and in our hearts.

Children’s Health Defense Europe and other organisations, groups of doctors, lawyers, activists here today and everywhere around the world are standing up to protect our children and defend their rights.  You are not alone. This is our planet, our future and our choice!