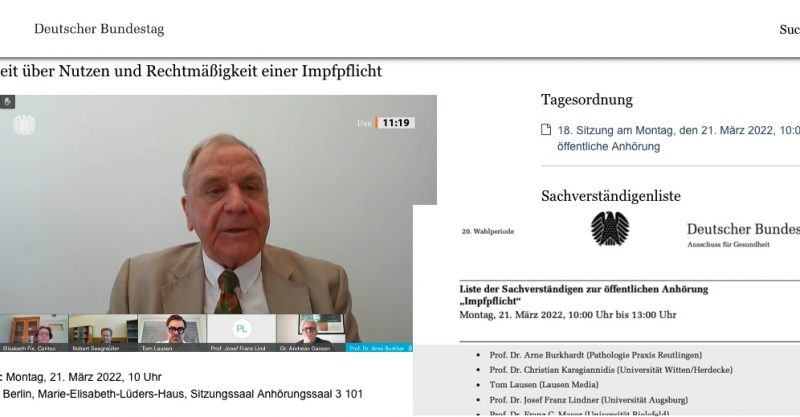 The warning about damage to the heart, brain and other organs from injections of genetically modified material called “Covid-19 vaccination” has now been officially documented first-hand in the parliamentary records of the German Bundestag. On March 21, Professor Dr. Arne Burkhardt was heard by the Bundestag’s Health Committee as a representative of an international group of experts consisting of ten scientists. The pathologist, who comes from Reutlingen, gave a detailed account of his research group’s shocking findings to parliamentarians and the public at the hearing on the “Benefits and Legality of Compulsory Vaccination.”

He extended an invitation to all doubters, “especially to [Health Minister] Herr Lauterbach,” to visit the institute and see for themselves that mRNA does not remain at the injection site – as officially claimed – but can be detected in all organs of the body up to 128 days after injection, thus posing a major health risk.

It must have been pure coincidence that Professor Burkhard was disturbed in his flow of speech by the president of the meeting at the very moment when he mentioned that Minister Lauterbach had enjoyed an “excellent pathological education with Professor Mittermayer” [which should enable him and all other physicians to evaluate the pathological tissue sections of the fatalities after Covid vaccination].