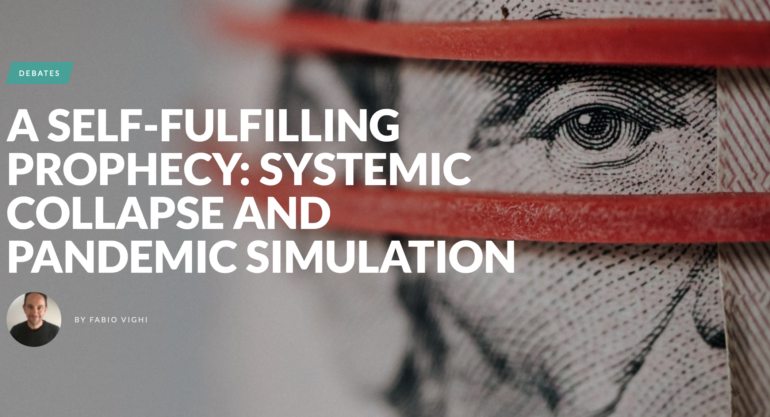 A  year and a half after the arrival of Virus, some may have started wondering why the usually unscrupulous ruling elites decided to freeze the global profit-making machine in the face of a pathogen that targets almost exclusively the unproductive (over 80s). Why all the humanitarian zeal? Cui bono? Only those who are unfamiliar with the wondrous adventures of GloboCap can delude themselves into thinking that the system chose to shut down out of compassion. Let us be clear from the start: the big predators of oil, arms, and vaccines could not care less about humanity.

In pre-Covid times, the world economy was on the verge of another colossal meltdown. Here is a brief chronicle of how the pressure was building up:

June 2019: In its Annual Economic Report, the Swiss-based Bank of International Settlements (BIS), the ‘Central Bank of all central banks’, sets the international alarm bells ringing. The document highlights “overheating […] in the leveraged loan market”, where “credit standards have been deteriorating” and “collateralized loan obligations (CLOs) have surged – reminiscent of the steep rise in collateralized debt obligations [CDOs] that amplified the subprime crisis [in 2008].” Simply stated, the belly of the financial industry is once again full of junk.

9 August 2019: The BIS issues a working paper calling for “unconventional monetary policy measures” to “insulate the real economy from further deterioration in financial conditions”. The paper indicates that, by offering “direct credit to the economy” during a crisis, central bank lending “can replace commercial banks in providing loans to firms.”

15 August 2019: Blackrock Inc., the world’s most powerful investment fund (managing around $7 trillion in stock and bond funds), issues a white paper titled Dealing with the next downturn. Essentially, the paper instructs the US Federal Reserve to inject liquidity directly into the financial system to prevent “a dramatic downturn.” Again, the message is unequivocal: “An unprecedented response is needed when monetary policy is exhausted and fiscal policy alone is not enough. That response will likely involve ‘going direct’”: “finding ways to get central bank money directly in the hands of public and private sector spenders” while avoiding “hyperinflation. Examples include the Weimar Republic in the 1920s as well as Argentina and Zimbabwe more recently.”

22-24 August 2019: G7 central bankers meet in Jackson Hole, Wyoming, to discuss BlackRock’s paper along with urgent measures to prevent the looming meltdown. In the prescient words of James Bullard, President of the St Louis Federal Reserve: “We just have to stop thinking that next year things are going to be normal.”

15-16 September 2019: The downturn is officially inaugurated by a sudden spike in the repo rates (from 2% to 10.5%). ‘Repo’ is shorthand for ‘repurchase agreement’, a contract where investment funds lend money against collateral assets (normally Treasury securities). At the time of the exchange, financial operators (banks) undertake to buy back the assets at a higher price, typically overnight. In brief, repos are short-term collateralized loans. They are the main source of funding for traders in most markets, especially the derivatives galaxy. A lack of liquidity in the repo market can have a devastating domino effect on all major financial sectors.

17 September 2019: The Fed begins the emergency monetary programme, pumping hundreds of billions of dollars per week into Wall Street, effectively executing BlackRock’s “going direct” plan. (Unsurprisingly, in March 2020 the Fed will hire BlackRock to manage the bailout package in response to the ‘COVID-19 crisis’).

19 September 2019: Donald Trump signs Executive Order 13887, establishing a National Influenza Vaccine Task Force whose aim is to develop a “5-year national plan (Plan) to promote the use of more agile and scalable vaccine manufacturing technologies and to accelerate development of vaccines that protect against many or all influenza viruses.” This is to counteract “an influenza pandemic”, which, “unlike seasonal influenza […] has the potential to spread rapidly around the globe, infect higher numbers of people, and cause high rates of illness and death in populations that lack prior immunity”. As someone guessed, the pandemic was imminent, while in Europe too preparations were underway (see here and here).

18 October 2019: In New York, a global zoonotic pandemic is simulated during Event 201, a strategic exercise coordinated by the Johns Hopkins Biosecurity Center and the Bill and Melinda Gates Foundation.

21-24 January 2020: The World Economic Forum’s annual meeting takes place in Davos, Switzerland, where both the economy and vaccinations are discussed.

23 January 2020: China puts Wuhan and other cities of the Hubei province in lockdown.

Joining the dots is a simple enough exercise. If we do so, we might see a well-defined narrative outline emerge, whose succinct summary reads as follows: lockdowns and the global suspension of economic transactions were intended to 1) Allow the Fed to flood the ailing financial markets with freshly printed money while deferring hyperinflation; and 2) Introduce mass vaccination programmes and health passports as pillars of a neo-feudal regime of capitalist accumulation. As we shall see, the two aims merge into one.

In 2019, world economy was plagued by the same sickness that had caused the 2008 credit crunch. It was suffocating under an unsustainable mountain of debt. Many public companies could not generate enough profit to cover interest payments on their own debts and were staying afloat only by taking on new loans. ‘Zombie companies’ (with year-on-year low profitability, falling turnover, squeezed margins, limited cashflow, and highly leveraged balance sheet) were rising everywhere. The repo market meltdown of September 2019 must be placed within this fragile economic context.

When the air is saturated with flammable materials, any spark can cause the explosion. And in the magical world of finance, tout se tient: one flap of a butterfly’s wings in a certain sector can send the whole house of cards tumbling down. In financial markets powered by cheap loans, any increase in interest rates is potentially cataclysmic for banks, hedge funds, pension funds and the entire government bond market, because the cost of borrowing increases and liquidity dries up. This is what happened with the ‘repocalypse’ of September 2019: interest rates spiked to 10.5% in a matter of hours, panic broke out affecting futures, options, currencies, and other markets where traders bet by borrowing from repos. The only way to defuse the contagion was by throwing as much liquidity as necessary into the system – like helicopters dropping thousands of gallons of water on a wildfire. Between September 2019 and March 2020, the Fed injected more than $9 trillion into the banking system, equivalent to more than 40% of US GDP.

The mainstream narrative should therefore be reversed: the stock market did not collapse (in March 2020) because lockdowns had to be imposed; rather, lockdowns had to be imposed because financial markets were collapsing. With lockdowns came the suspension of business transactions, which drained the demand for credit and stopped the contagion. In other words, restructuring the financial architecture through extraordinary monetary policy was contingent on the economy’s engine being turned off. Had the enormous mass of liquidity pumped into the financial sector reached transactions on the ground, a monetary tsunami with catastrophic consequences would have been unleashed.

As claimed by economist Ellen Brown, it was “another bailout”, but this time “under cover of a virus.” Similarly, John Titus and Catherine Austin Fitts noted that the Covid-19 “magic wand” allowed the Fed to execute BlackRock’s “going direct” plan, literally: it carried out an unprecedented purchase of government bonds, while, on an infinitesimally smaller scale, also issuing government backed ‘COVID loans’ to businesses. In brief, only an induced economic coma would provide the Fed with the room to defuse the time-bomb ticking away in the financial sector. Screened by mass-hysteria, the US central bank plugged the holes in the interbank lending market, dodging hyperinflation as well as the ‘Financial Stability Oversight Council’ (the federal agency for monitoring financial risk created after the 2008 collapse), as discussed here. However, the “going direct” blueprint should also be framed as a desperate measure, for it can only prolong the agony of a global economy increasingly hostage to money printing and the artificial inflation of financial assets.

Continue Reading this Article at The Philosophical Salon